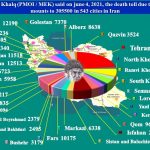 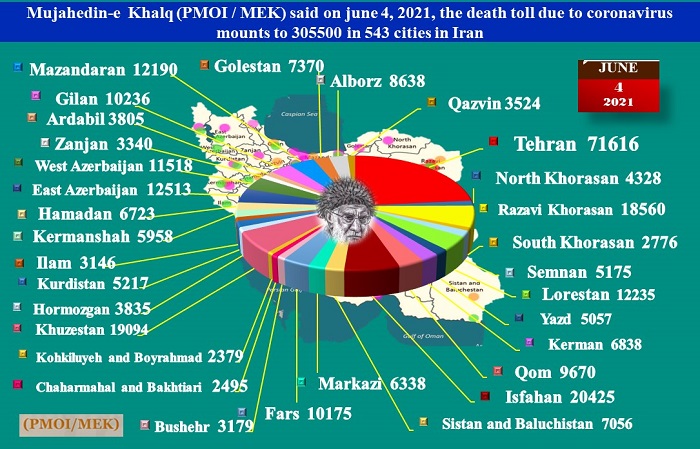 The National Council of Resistance of Iran (NCRI), and the People’s Mujahedin of Iran (PMOI / MEK Iran), reported that the coronavirus death toll in 543 cities surpasses 305,500.

The fifth wave in the coming weeks

The number of red cities is a wake-up call for the fifth wave in the coming weeks. Some cities are exposed to the Indian and South African COVID-19 variants. (IRNA news agency, June 4, 2021)

The National Coronavirus Combat Taskforce (NCCT), chairman of the Epidemiological Committee said: During the COVID-19 pandemic, many countries had three outbreaks, but we had four. There is potential for a fifth outbreak. (ISNA news agency, June 4, 2021)

This official added: “We need to accelerate the vaccination process and reach 400,000 vaccine doses per day in order to establish herd immunity,”.

Isfahan University of Medical Sciences spokesperson said: The COVID-19 status in 14 cities of the Province is orange.  No city is in blue or white (virus-free). (Mehr news agency, June 4, 2021)

(NCRI) and (PMOI / MEK Iran): COVID-19 fatalities in 541 cities exceed 305,500. Tehran in crisis: 8,320 As long as we don’t have a national system to evaluate mutated viruses, we will always be facing threats and we need to definitely provide measures to have an immediate and timely response,” said a senior health official in Tehran.