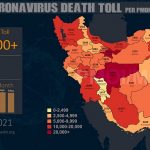 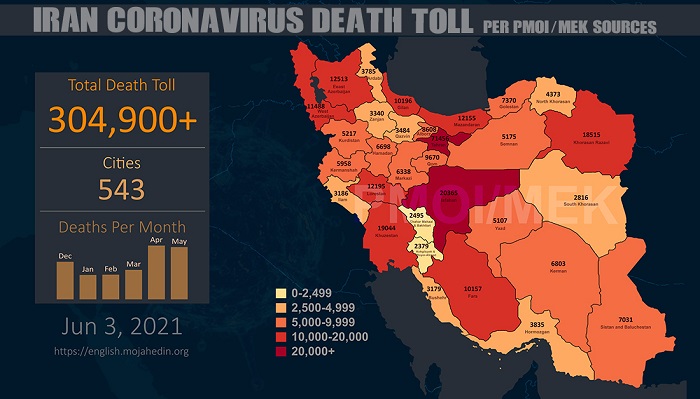 The National Council of Resistance of Iran (NCRI), and the People’s Mujahedin of Iran (PMOI / MEK Iran), reported that the coronavirus death toll in 543 cities surpasses 304,900.

(PMOI / MEK Iran) and (NCRI): COVID-19 fatalities in 541 cities exceed 304,900. Tehran in crisis: 8,320 As long as we don’t have a national system to evaluate mutated viruses, we will always be facing threats and we need to definitely provide measures to have an immediate and timely response,” said a senior health official in Tehran.

The Mullahs Regime’s Health Ministry said: In some red cities, we face the spread of the Indian and South African COVID-19 variants, and the chance of a new outbreak is severe. (IRNA news agency, June 3, 2021)

The National Coronavirus Combat Taskforce (NCCT) Scientific Committee spokesperson said: If we are not careful, we will have the fifth COVID-19 outbreak in late June. (ISNA news agency, June 3, 2021)

Director-General of Sistan and Baluchestan Blood bank said: The situation of blood reserves is critical. Coronavirus has reduced blood donation by 50%. (IRNA, June 3, 2021)

When trying to receive their second dose, the response that people get from vaccination centers is: “We do not have any vaccines, come back later.” (State-run media Khabar Online, June 3, 2021)

Minoo Mohraz: If the second dose of the COVID-19 vaccine is not injected for any reason, the person should go through the vaccination process again, and the initial vaccination must be disregarded altogether. (Khabar Online, June 3, 2021)