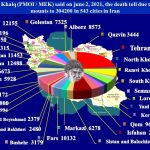 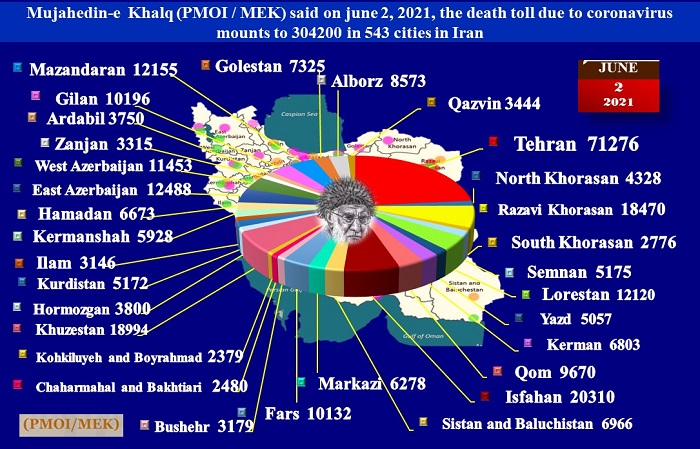 The National Council of Resistance of Iran (NCRI), and the People’s Mujahedin of Iran (PMOI / MEK Iran), reported that the coronavirus death toll in 543 cities surpasses 304,200.

Mullah regime’s deputy Health Minister Iraj Harirchi said: The COVID-19 situation will be the same next month. The daily positive tests are over 10,000. We are still at risk of the spread of the Indian and African variants and the possibility of domestic virus mutation. (Mehr news agency, June 2, 2021)

Chinese, British, Indian, and African COVID-19 virus has spread in Hormozgan Province. The situation has worsened in the past two or three weeks. (IRNA news agency, June 2, 2021)

Jiroft, Sirjan, and Shahr-e Babak in Kerman Province are red in terms of COVID-19 infections. Kerman has the biggest number of red cities after Hormozgan Province. (Tasnim, June 2, 2021) 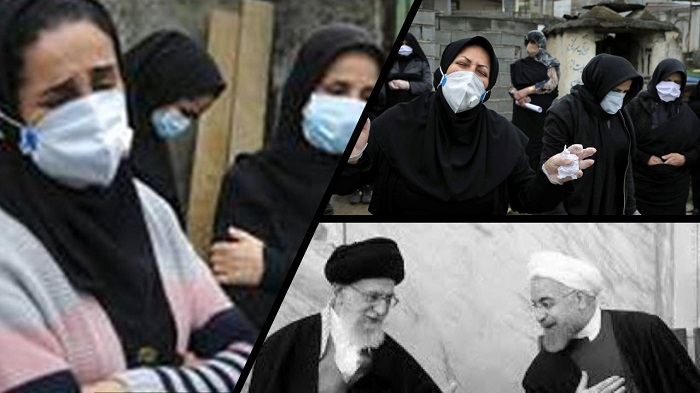 (NCRI) and (PMOI / MEK Iran): Constant lies of the Iranian regime’s leaders about the reality of the coronavirus crisis in Iran.

Koghiluyeh & Boyer Ahmad University of Medical Sciences spokesperson said: “Conditions are not good at all. The cities of Gachsaran and Basht are still centers of concern because the Indian variant has been seen in the neighboring city of Bushehr,”. (Fars news agency, June 2, 2021)

Hormozgan University of Medical Sciences spokesperson said: “Two days ago we had 741 positive coronavirus cases and this number increased to 874 in the past 24 hours, setting a new record. 7695 coronavirus patients are in house quarantine,”. (ISNA news agency, June 2, 2021)