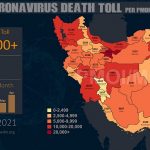 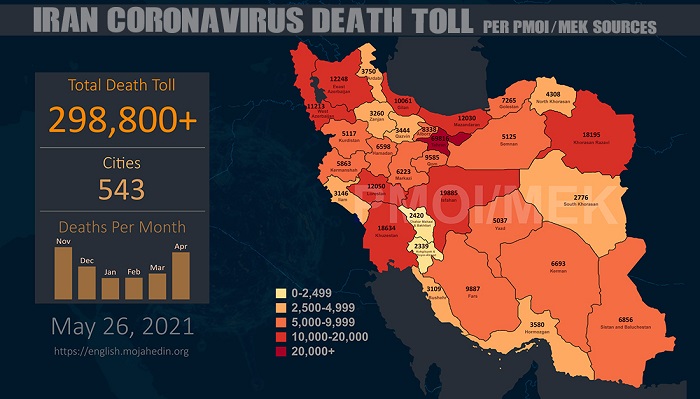 The National Council of Resistance of Iran (NCRI), and the People’s Mujahedin of Iran (PMOI / MEK Iran), reported that the coronavirus death toll in 543 cities surpasses 298,800.

In the past four days, the number of identified COVID-19 cases and hospitalization has increased by 48%, and 45%, respectively. While the fourth outbreak is still not over, we would likely be involved in the next outbreak creating a much more intense crisis. (Tasnim, May 26, 2021)

(PMOI / MEK Iran) and (NCRI): “If the Brazilian variant finds its way into Iran it will not necessarily mean an individual has come from Brazil. It could mean this mutation took place inside Iran and it may be the same type as those seen in Brazil,” said Alireza Raisi.

The mullah regime’s Health Minister Saeed Namaki said: Given the spread of Indian and South African COVID-19 variants, we are worried about the next dangerous outbreak. 30% of hospitalizations will go to the ICU. (Tasnim news agency, May 26, 2021)

Tehran City Council spokesperson said: Since the beginning of last week, the number of COVID-19 hospitalizations has increased significantly; the situation in Tehran is not favorable and should still be considered red. It is not far from the expectation that we will enter the fifth outbreak. (Mehr news agency, May 26, 2021)

The Scientific Committee for the National Coronavirus Combat Taskforce (NCCT) spokesperson said: In the production of vaccines, the chain must be fully protected, and in case of any interruptions due to power outages, the entire production chain must be restarted from the beginning, and millions of dollars may be lost in damage. (ISNA news agency, May 26, 2021)

West Azerbaijan University of Medical Sciences spokesperson said: “During the past 24 hours yet again, we have registered more than 500 new cases and the number of people hospitalized for coronavirus in the cities of Urmia and Khoy has increased once more,”. (Tasnim, May 26, 2021)

Hormozgan University of Medical Sciences spokesperson said: “Currently we have 400 to 500 new positive cases per day. Three days ago, we had a new record of 700 new cases, meaning there are even more that have not been identified. Of the eight cities registered as red zones across the country five are in Hormozgan province and three are in our neighboring provinces. In Hormozgan and Sistan & Baluchistan provinces, there is a new rise in coronavirus numbers. Similar conditions are seen in Bushehr province,”. (ISNA news agency, May 26, 2021) 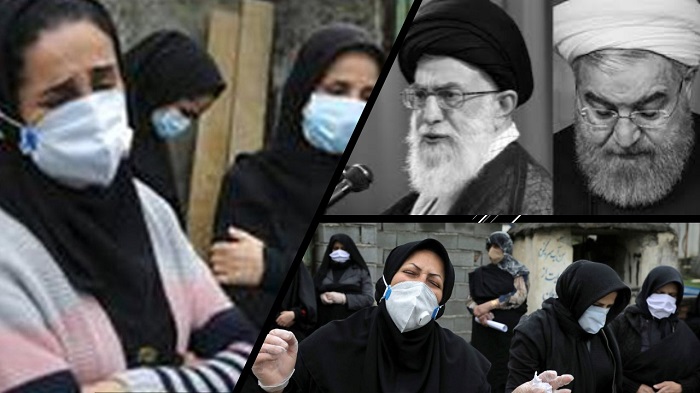 (PMOI / MEK Iran) and (NCRI): Constant lies of the Iranian regime’s leaders about the reality of the coronavirus crisis in Iran.