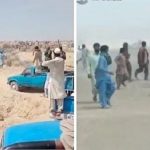 Written by Mohsen Aboutalebi on April 21, 2021. Posted in NEWS

The National Council of Resistance of Iran (NCRI), and the People’s Mujahedin of Iran (PMOI / MEK Iran), reported that a Baluchi fuel carrier surrounded by the Revolutionary Guards (IRGC) along the Iran-Pakistan border, died of hunger and thirst.

On Friday, April 17, a Baluchi fuel carrier surrounded by the Revolutionary Guards (IRGC) along the Iran-Pakistan border, called Fazl Sabzel, died of hunger and thirst. According to the report by Iranian resistance, hundreds of Baluchi fuel carriers have long been under siege in the scorching heat, with no water or food and no shelter in that region since a week ago.

The suppressive forces of the Revolutionary Guards (IRGC) have blocked the highway to prevent transporting fuel in the border area.

(NCRI) and (PMOI / MEK Iran): Locals in the neglected province of Sistan and Baluchestan voice their anger towards the mullahs’ regime.

It worth knowing that the livelihood of most people in this area on both sides of the border depends on fuel business. The denial of access to these people, intended to enable the IRGC to monopolize fuel sales has adversely affected their lives.

Last February, the IRGC tried to block the transfer of fuel by Baluchi fuel carriers by erecting barriers and digging large holes on the highway, which were met with widespread protests. The IRGC opened fire on the fuel carriers and the people who came to their aid, killing dozens of protesters and injuring scores more. Dozens of fuel trucks were also set on fire by the Guards.

“Down with the mullahs’ regime, we support Saravan.” 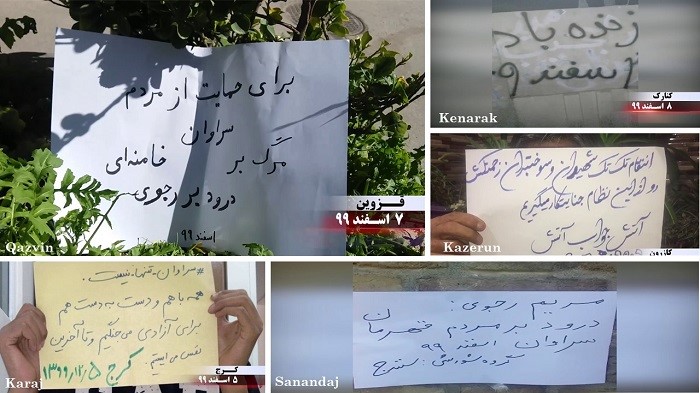 (NCRI) and (PMOI / MEK Iran): Activities of the MEK supporters and the Resistance Units in solidarity and support of the Sistan and Baluchestan uprising. – February 23 to February 26, 2021