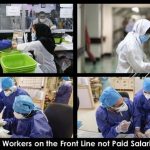 Written by Jennifer Jones-Kelley on April 21, 2021. Posted in NEWS

(PMOI / MEK Iran) and (NCRI): Recent reports reveal just how many doctors and nurses have been felled by the coronavirus. 80,000 Nurses Have Contracted Covid-19 Since Pandemic Began.

The Covid-19 pandemic has taken the lives of more than 258,900 Iranians in 539 cities over the last fifteen months, according to statistics gathered by the MEK. Iran’s Covid-19 crisis has been exacerbated by a shortage of healthcare workers caused by high rates of infection by front-line medical workers. Recent reports reveal just how many doctors and nurses have been felled by the coronavirus.

According to the head of Iran’s Nursing Organization, Mohammad Mirza Beigi, 80,000 Iranian nurses have contracted Covid-19 since the pandemic began, and 8,000 healthcare workers are currently unable to work with patients due to hospitalizations, quarantines, and other factors related to the virus.

Healthcare workers have blamed the high rate of infections on the lack of proper personal protective equipment (PPE) for medical staff and patients and the limited number of vaccine doses in Iran.

Mirza Beigi also stated that Iran is currently suffering from a nursing shortage, which has been worsened by the high rate of coronavirus infections among healthcare workers. “According to global standards, four nurses are needed for every 1,000 people in the population. This figure is under one nurse, something around 0.9, in Iran,” Mirza Beigi said, according to an April 9, 2021 article on the state-run Entekhab website.

(PMOI / MEK Iran) and (NCRI): The situation for nurses in Iran is worrying, with many living with constant job insecurity and poor working conditions.

Mirza Beigi stated that 110 Iranian nurses have died of Covid-19 since the pandemic began, according to the semi-official ISNA.

Mohammad Sharifi Moghadam, General Director of the Nurse’s House, cited a higher death toll in an April 13 interview with the state-run Khabarban website.

“Unfortunately, in the past week, eight nurses in various cities died from COVID-19 and in light of the delay in the vaccination of nurses, it can be said that nurses are being massacred in hospitals,” Sharifi Moghadam said.

“Unfortunately, with 130 dead nurses who were fighting Covid-19, we are among the countries with the most number of infections and deaths among nurses,” he added.

Last fall, the state-run Mehr news agency quoted a member of the regime’s Covid-19 task force, who said that 164 doctors and nurses had died of coronavirus as of September 23.

The regime’s overall Covid-19 statistics have been consistently underreported, so it is impossible to discern the true number of infections or deaths. The number that is disclosed is always the minimum possible number when dealing with the regime.

(PMOI / MEK Iran) and (NCRI): MEK has been closely monitoring the Coronavirus outbreak since the very start.

Iranians have expressed frustration at the regime’s failure to procure an adequate vaccine supply to put an end to the crisis. For many, the blame for the slow vaccine rollout rests solely at the feet of Supreme Leader Ali Khamenei, who in January banned the import of vaccines manufactured in the U.S. or U.K.

On April 8, 2021, the state-run Jahan-e Sanat daily summed up this frustration, writing, “Everyone knows that during the past 14 months, the government has put preference over the economy to the lives and health of people, although the people are always the ones who are sacrificed.”

Without U.S. and U.K. vaccines, the regime has struggled to obtain enough supply to inoculate even its front-line workers. Shamsuddin Shamsi, the head of the General Assembly of Iran’s Medical Organization, told ILNA on April 8 that 80 percent of healthcare workers in public hospitals have not yet been vaccinated.