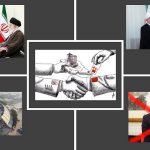 Written by Jennifer Jones-Kelley on April 2, 2021. Posted in NEWS

(PMOI / MEK Iran) and (NCRI): hand over one of its islands to China. In return, Iran will get military and security cooperation.

After six years of negotiations, on March 27 the Iranian regime finalized a 25-year economic deal with China. The terms of the long-awaited deal will require Iran to liquidate large portions of its wealth and resources and hand them over to China in exchange for a $400 billion Chinese investment in banking, telecommunications, ports, railways, health care, and IT industries. In essence, the Iranian regime has ceded control of a large portion of the country’s economic infrastructure to a foreign power.

The National Council of Resistance of Iran (NCRI), and the People’s Mujahedin of Iran (PMOI / MEK Iran), reported that the newly-signed deal is part of China’s 2013 “Belt and Road Initiative,” an economic plan that primarily focuses on financially struggling countries that will accept heavy Chinese investment in their economy in return for short-term economic gain.

Six years of negotiations and concessions

Negotiations of the Iran-China deal began in 2015 but were largely kept secret until recently. The few details that leaked over the six years of negotiations revealed a deal that regime officials have compared to the Turkmenchay Treaty, a historically disastrous cession of Iranian land by the Qajar monarchy to the Russian monarchy. Analysts say that the Iran-China deal serves only to liquidate the country’s resources in order to keep the current regime in power.

In 2015, the prospect of entering into a lopsided deal with China was so unwelcome to many in the regime, Supreme Leader Ali Khamenei had to put his personal stamp of approval on negotiations. Expediency Council member Gholamreza Mesbahi Moghaddam told state-run media that Khamenei sent “a special message and special envoy” to China to negotiate with President Xi Jinping. Later that same year, Jinping visited Tehran, and the two countries declared they were negotiating a 25-year treaty shortly afterward.

In February 2016, sources revealed that the regime would liquidate the country’s oil, gas, and petrochemical industries, as well as its economic infrastructure. The treaty also included military and security cooperation.

In 2019, sources report that the regime agreed to allow China to delay payment for Iranian products for up to two years. China will now pay for Iranian oil in Yuan instead of dollars.

In March 2021, MP Hassan Norouzi detailed further startling concessions. “During the negotiations, the government agreed to forfeit Kish Island to China for 25 years.”

Kish Island is an important economic hub in the Persian Gulf. Norouzi added that the deal also included the “forfeiture of the Caspian Sea.” The Caspian Sea is both economically important and a significant natural resource that belongs to the Iranian people. It was not Khamenei’s to give away.

(PMOI / MEK Iran) and (NCRI): the threat posed by China is very real, especially seen in military and economic deals with Iran.

National Council of Resistance of Iran (NCRI) President-elect Mrs. Maryam Rajavi responded to news of the Iran-China deal on Twitter. She wrote: “The mullahs only think of preserving their own religious fascist dictatorship, which Khomeini said is the most important issue. He said they could even forsake the precepts of Islam to preserve the regime. Therefore, the mullahs could not care less about protecting the Iranian people’s assets and resources.”

The MEK has repeatedly stressed that the mullahs do not have the Iranian people’s best interests at heart. They will pillage Iran’s land, resources, and wealth until the country is stripped bare or the regime is overturned.