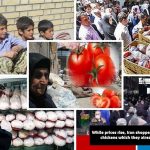 It is the time that Iranians, in Iran and all across the world, prepare to celebrate Nowruz – Persian New Year. However, the celebrations for many people in Iran are not going to be as wished-for because of several crises, including economic issues and the continuing Coronavirus health crisis.

The National Council of Resistance of Iran (NCRI), and the People’s Mujahedin of Iran (PMOI / MEK Iran), reported that people’s problems are due to the regime’s mismanagement and corruption. It is always the people that pay the price for the regime’s errors, and this is applicable to both the economic and the health crisis.

With regards to the health crisis, medical experts are warning about a new wave of Coronavirus infections and the increased circulation of new mutated versions of the virus. The National Council of Resistance of Iran (NCRI), and the People’s Mujahedin of Iran (PMOI / MEK Iran), reported that the coronavirus death toll in 522 cities surpasses 234,100.

Many people across Iran do not have the possibility to stay at home as their employers are forcing them to continue working in contaminated work environments.

Living under the poverty line

The poverty line in Iran is approximately 100 million rials per month (or $400). Many employees and workers across the country struggle to earn this much. Furthermore, many state-backed employers are not even paying workers in a timely manner. This has caused a major backlash in society, with large numbers of people protesting because of their extremely delayed wages.

Every day, there are protests by workers. For example, in Tehran, workers from the municipality of Shahryar held a rally last month protesting against their salaries that have not been paid for a couple of months. One worker at the rally said that his monthly salary is 24.5 million rials (approximately $98) and that his bonus is 1.5 million rials  (approximately $6). He questioned how he can live on these wages, asking if the town’s major supported his family with the equivalent of $104 per month.

The wages are far too low

Another protester also pointed out that wages are far too low, saying that official forces working for the municipality get over 80 million rials ($320) per month while the contract companies hired by the Mayor only pay workers 25 million rials ($100) for the same job.

This is something that is quite common across the country. Contract workers are hired so that officials can pay less money to the workers. This means that very large numbers of people in Iran simply cannot make ends meet and they are unable to get the most basic of rights awarded to them.

The increasing number of protests

Because of this, social unrest is high and there has been an increasing number of protests, especially over the past few months. The economic problems, including the rising inflation and the increasing cost of goods, means that the people are finding themselves in a financial position that is getting worse as time goes on.

State-run media outlets in the country are reporting on the situation, saying that the situation has become so untenable for the people that the regime must be aware that another major nationwide uprising is on the horizon. They warn officials that there is nothing it can do to remedy the situation as the regime has let the problems get past the point of no return.

(NCRI) and (PMOI / MEK Iran): Retirees’ protest against low pension below the poverty line in Iran.