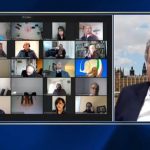 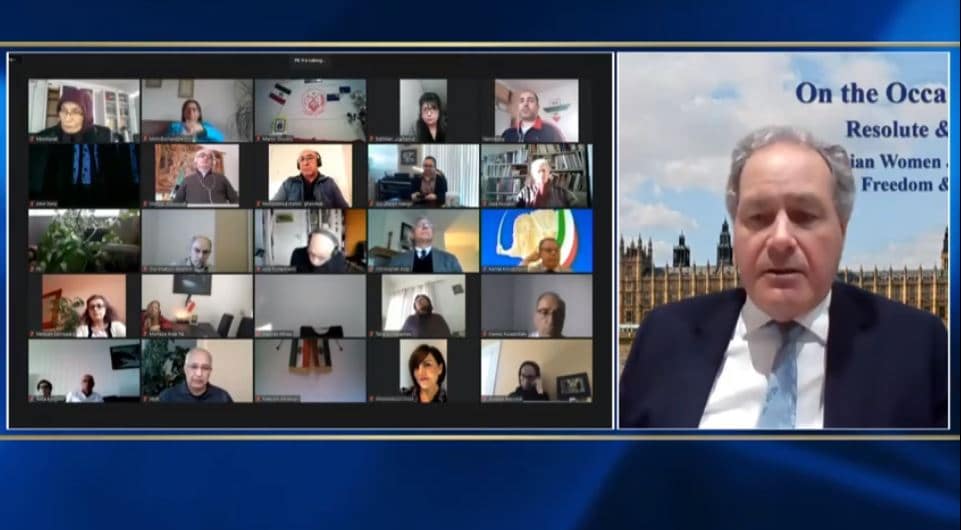 Madame Rajavi, honourable colleagues and friends, it is an honour to celebrate International Women’s Day with you.

The oppressive regimes in history and in our time

I express my support for and send my best wishes to the Iranian women, who are shouldering the main responsibility and hard task to bring down one of the most oppressive regimes in history and in our time.

As Madame Rajavi has said on many occasions, this regime cannot abandon terrorism, human rights violations, executions or torture, even for one day because if it did it would be immediately overthrown by the people and the women of Iran, because the people see the regime as the real enemy of Iran.

Repressive and obligatory dress-code against women

Misogyny is the regime’s nature. It justifies and enforces the domestic repression of women by clamping down on women and implementing the repressive and obligatory dress-code against them.

The regime has no capacity to reform. In other words, the principle of the velayat-e faqih (absolute clerical rule) is the pillar of the regime’s constitution, and it cannot be changed even through a referendum.

The Iranian people know this and they express this understanding with their protests all across the country in the last three years where they chant slogans like: “Down with Dictator”, “Our enemy is right here, they lie that it’s America”, “reformers, hard-liners, the game is over” and “Only by taking it to the street, we get our rights”.

(NCRI) and (PMOI / MEK Iran): Iranian women have been denied their rights for 40 years.

The regime in Iran acts like a pariah state with nuclear extortion, hostage-taking diplomacy, terrorism and destabilising the region complemented with a brutal domestic crackdown on legitimate protests, opposition, and dissenting voices.

This unacceptable behaviour must be met with maximum pressure and not maximum diplomacy by the UK and its allies in Europe and the US.

In this regard, it is totally unacceptable for the EU to sponsor a business forum to advance trade in Iran with the participation of European and Iranian diplomats, as was the case last week, while the regime is doing everything it can to exclude women from the Iranian society and prevent their economic participation or emancipation.

In addition, the EU-Iran Economic Forum sent the wrong signal to the regime in Iran, the world’s leading state sponsor of terrorism at a time when one of its diplomats has been sentenced to 20 years for terrorism in Europe and for trying to bomb the opposition, NCRI gathering in Paris.

The UK, Europe and the US need to listen to the people of Iran and apply maximum pressure.

The NCRI and the 10-point democratic platform of Madame Rajavi is the theocracy’s kryptonite. The 10-point plan of Madame Rajavi has gained wide cross-party recognition in the US Congress, both Houses of UK Parliament and the European Parliament. We saw this with the strong support for a new resolution on Iran in the US Congress last month, House Resolution 118 and previous support for the EDM on this topic in the UK House of Commons demonstrates that this is the will of the elected representatives of our great countries.

Supporting the Iranian people and the NCRI to free Iran

Supporting the Iranian people and the NCRI to free Iran from the grip of this brutal regime is the only long-term sustainable solution to secure and advance human rights, democracy and equality in Iran. This must be the centre and ultimate goal of the UK’s Policy on Iran.

Women are standing up to the regime to realise the democratic aspirations of the Iranian people, which today, in my view, converges with both the economic and security interests of the UK and Europe at large.

(NCRI) and (PMOI / MEK Iran): The Free Iran rally, where over 100,000 supporters of MEK gathered on June 30, 2018, to pledge support for the democratic alternative to the Iranian regime (the National Council of Resistance of Iran-NCRI). The Iranian regime had planned to bomb the gathering, but several of the Iranian regime operatives were arrested including one of its diplomats, Assadollah Assadi.

This is the real win-win policy for the UK and Iran, in contrast to dialogue and the flawed nuclear deal with the mullahs that many civil servants, diplomats and proponents of appeasing the regime claim.

Let us avow ourselves that by this time next year when we celebrate International Women’s Day, we do so in Tehran with a free Iran and women properly emancipated. Thank you for allowing me to participate in this excellent conference.