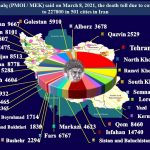 Written by Esmail Mohades on March 9, 2021. Posted in NEWS 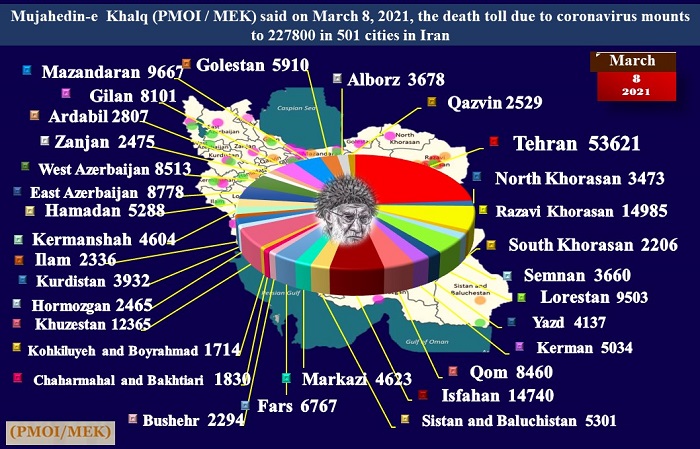 The National Council of Resistance of Iran (NCRI), and the People’s Mujahedin of Iran (PMOI / MEK Iran), reported that the coronavirus death toll in 501 cities surpasses 227,800.

(PMOI / MEK Iran), and (NCRI): Denying the people an approved vaccine should actually result in increased pressure on the Iranian regime.

Considering that Iran has a population of 80 million, at least 800,000 people should be vaccinated to cover one percent of the population.

Even if we import twice as many vaccines in the remaining two weeks before the end of the Persian calendar this year, it will still not cover 800,000 people.

A country like the UAE has vaccinated 65% and Turkey 10% of its population. This is while Iran has already entered the fourth wave of coronavirus outbreak, and the number of deaths and those infected is rising every day.

The heads of the National Coronavirus Combat Taskforce (NCCT) in Tehran, Alireza Zali, said on state-run radio and television: so far, 350 cases of British coronavirus have been identified, which is the tip of an iceberg. Most of it is hidden, and this is alarming.

Ahvaz University of Medical Sciences: Despite the increase in the number of beds dedicated to coronavirus patients and the arrangements we have made, the number of patients referring to the hospitals is increasing, and we face a shortage of beds and nurses in the Province.

President of West Azerbaijan Medical University: The number of hospitalized patients has reached 488, of which 148 are in the ICU.

Head of Hazrat Masoumeh Hospital in Qom: The number of children infected with the coronavirus is increasing. Twenty-five children are including several infants, are hospitalized for coronavirus.

After many months of deception and lying, the Iranian regime’s president, Hassan Rouhani, once again tried to justify the Iran regime’s vaccination hoax. His remarks align with the mullahs regime’s inhumane coronavirus policy to increase mass casualties, thus controlling the restive society. But what will be the outcome for the regime?

“Vaccine production is limited in the world. Let’s not forget that there is no justice, and rich countries can buy it sooner. Even if there is a vaccine, its injection is limited. Can we vaccinate everyone? Vaccine safety is not permanent,” he bogusly claimed.