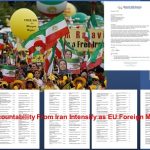 Written by Esmail Mohades on February 25, 2021. Posted in NEWS 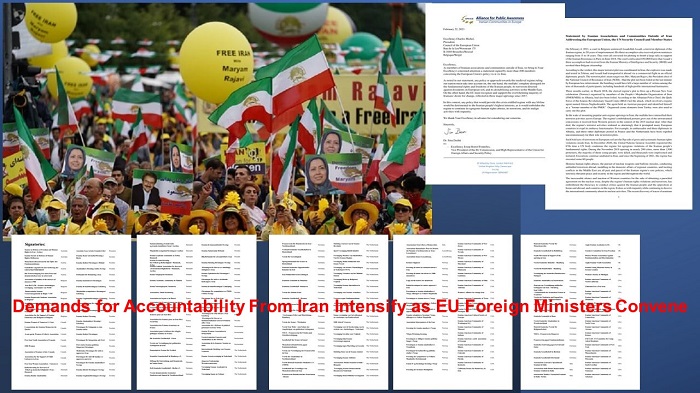 The Alliance of Public Awareness which is made up of more than 200 members of the Iranian communities in Europe has called on European governments to adopt a firm policy towards the Iranian regime.

Letter to President of the Council of the EU

In a letter to President of the Council of the European Union Charles Michel, the members of the Alliance of Public Awareness emphasized that the EU must not ignore the Iranian regime’s “complete disregard for the fundamental rights and freedoms of the Iranian people, its terrorism directed against dissidents on European soil, and its destabilizing activities in the Middle East”.

They also called on the EU to recognize that the majority of people in Iran want regime change, as evidenced during the three major uprisings that have occurred in the country since 2017. It is “detrimental to the Iranian people’s highest interests” that the EU provides the regime with “any lifeline” as it would just encourage it to continue violating human rights, to continue with its terrorist activities, and to continue with its belligerent acts.

The recent trial of Assadollah Assadi

To their letter, they joined a statement from Iranian associations and communities outside of Iran. Attention was drawn to the recent trial of Assadollah Assadi for his role in the plot to bomb the National Council of Resistance of Iran (NCRI), and the People’s Mujahedin of Iran (PMOI / MEK Iran) rally in June 2018 just outside Paris.

The silence and inaction of Western countries

In their statement, they said that the silence and inaction coming from Western countries is “inexcusable” and is giving the regime the green light to continue on the same belligerent path.

They emphasized that the regime continues to deceive the international community about its nuclear program and that it has still not been held responsible for never abandoning its efforts to make a nuclear weapon.

The Iranian communities and associations call on the EU

The Iranian communities and associations call on the EU, its member states, and the UN Security Council to take a number of measures, including the closure of Iran’s embassies, official missions, and centers that promote terrorism and fundamentalism.

(NCRI) and (PMOI / MEK Iran): Four European countries pulled out of a joint online conference with Iran after the December 12 execution of dissident journalist Rouhollah Zam. The Europe-Iran Business Forum was scheduled to begin on Monday with keynote addresses from European Union High Representative Josep Borrell and Iranian regime Foreign Minister Javad Zarif but was canceled after the French, Austrian, German, and Italian ambassadors boycotted the conference in protest of the regime’s execution of Mr. Zam.

The IRGC and the MOIS should be designated as terrorist entities

The IRGC and the MOIS, they advise, should be designated as terrorist entities and their agents and mercenaries should be expelled. “Consider granting asylum and citizenship to Tehran’s agents as a red line because it will be exploited as a tool for terrorism and espionage.”

They also would like to see the dossier of the regime’s human rights violations and terrorism referred to the UN Security Council and ask for the regime’s leaders, in particular its foreign minister, to be held to account for decades of crimes against humanity and terrorist activities.

And finally, they call for the regime to be denied seats in the United Nations and other civil international forms. These seats should instead be afforded to the NCRI as the representatives of the people of Iran and the democratic alternative to the mullahs.