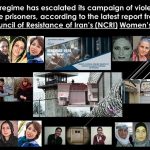 Written by Jennifer Jones-Kelley on February 24, 2021. Posted in NEWS

(NCRI) and (PMOI / MEK Iran): Iranian regime lawmakers and those within President Hassan Rouhani’s administration to make its judiciary and prison authorities accountable for their respective roles in denying healthcare to prison inmates.

The Center for Human Rights in Iran (CHRI) released a statement on Monday urging the international community to condemn the Iranian regime for its failure to provide adequate medical treatment to prisoners under its care.

Prisoners in Iran are in desperate need of medical treatment

“Many prisoners in Iran are in desperate need of medical treatment and more will die without immediate care,” said CHRI Executive Director Hadi Ghaemi.

“Governments worldwide should condemn Iran’s practice of denying medical care to prisoners as the torture and effective extrajudicial murder of prisoners that it represents,” Ghaemi added.

The CHRI statement further called on Iranian regime lawmakers and those within President Hassan Rouhani’s administration to make its judiciary and prison authorities accountable for their respective roles in denying healthcare to prison inmates.

The CHRI statement came in response to the Sunday death of Iranian prisoner of conscience Behnam Mahjoubi. Mahjoubi was a member of the Sufi Gonabadi Order, a group that faces persecution in Iran. He began serving a two-year sentence on “national security” charges in June 2020, despite a conclusion from the regime’s State Medical Examiner that he was not medically able to withstand incarceration. Mahjoubi’s condition deteriorated after being denied proper medical care while in Tehran’s infamous Evin Prison. On February 13, 2021, he was transferred to Loghman Hospital in Tehran after suffering several seizures. He died there eight days later.

The Iranian Resistance & groups of political prisoners called for the prosecution of regime leaders, including the Judiciary Chief Ebrahim Raisi, following the death of Behnam Mahjoubi.#Iran#HumanRightshttps://t.co/72B13sz0n6

The United Nations issued its own statement about Mahjoubi, in which it called for “a full and transparent investigation” into the circumstances leading to his death.

The statement added, “His death is another reminder of how adequate medical treatment is repeatedly denied to detainees.”

The Iranian regime frequently imprisons political dissidents, human rights activists, and ethnic and religious minorities under the guise of “national security” crimes. These political prisoners and prisoners of conscience are denied hospital transports at higher rates than other inmates and suffered torture at the hands of prison authorities.

Political prisoner Arash Sadeghi wrote a letter dated February 3, 2021, to U.N. High Commissioner for Human Rights Michelle Bachelet naming fellow prisoners who were being denied medical care. Some of their cases are summarized below:

#Iran
The letter of Political prisoner Arash Sadeghi in response to the continuing ignorance about his wife Golrokh Iraee after one month transfer to IRGC detention Center 2A! #جان_گلرخ_در_خطر_است https://t.co/adc0QEZg83

Saba Kord Afshari, #civilrights activist and daughter of Raheleh Ahmadi has been held in Evin Prison since June 2019 and is serving her sentence in the women’s ward of Evin Prison. pic.twitter.com/fAxnuh2bkU

#NCRI and #MEK reported that the political prisoner, Soheil Arabi, has been accused of new charges while still in prison in #Iran. Arabi has been shunted from one prison to another since he was first incarcerated.https://t.co/5by1rKGLPK pic.twitter.com/FbD222vktu

On October 21, Evin Prison authorities called Yasaman Ariyani & her mother, Monireh Arabshahi, to meet w/ their lawyer. But they transferred them to Kachouii Prison in Karaj. They were serving their 9 yrs & 7 mnths in prison for opposing compulsory veil.https://t.co/nDzrVtw1Bn pic.twitter.com/EeiMZpF7Jz

Authorities are also not allowing Farhang & Shahram Pourmansour's transfer while they both need to undergo surgery. pic.twitter.com/Tqz47yFt2n

#Iran teachers activist #HashemKhastar is on hunger strike while in custody.
His wife is calling on international organizations to strive for his release.#HumanRightshttps://t.co/kgykswCnDP

Family of #Iran Dissident Jailed Since 2001 Appeals for Help to Secure Parole: Saeed Masouri, who is in his mid-50s, has been imprisoned in Iran since Jan. 8, 2001, for being a supporter of #MEK. The group is led by #MaryamRajavi advocates overthrow regime https://t.co/Tl9FK8wV5n pic.twitter.com/U2dnGpY7Sg

Fatemeh Mosanna & her husband were sentenced to 15 yrs in prison, & their business & home confiscated by the regime. https://t.co/9f0SDsFmMc

Their crime? Holding a memorial ceremony for Mr. Sadeqi’s father, a member of the opposition PMOI who just passed away.

Mrs. Maryam Rajavi the President-elect of the National Council of Resistance of Iran’s (NCRI): Prisoner of conscience Behnam Mahjoubi was persecuted & tortured, and yet the criminal Judiciary in Iran prevents publication of the news of his death and its reason. They conceal what they did to him over 3 years of imprisonment in Evin and Aminabad Psychiatric Hospital.