Written by Esmail Mohades on February 23, 2021. Posted in NEWS

The National Council of Resistance of Iran (NCRI), and the People’s Mujahedin of Iran (PMOI / MEK Iran) reported that the recipients of welfare payment and pensioners held protest rallies in a number of cities across the country. Their aim was to tell the regime, once again, what their demands are.

This is not the first time pensioners and welfare recipients have held a protest rally – they have been very active over the past few months. The activity yesterday was a continuation of the previous week’s protest rally.

The regime has been cracking down hard on protesters and has tried hard to prevent any gatherings that could turn into protests. The atmosphere is heavy and there is a significant presence of security forces in many of the big towns and cities across the country, but this has not stopped the retirees and welfare recipients from organizing and participating in protests.

The inflation rate that keeps increasing

They have highlighted that their circumstances have gone downhill over the past few years because of the inflation rate that keeps increasing and the devaluation of the rial. For years they have been calling on the government to adjust their minimal income but their demands have never received a favorable response.

Protest in the city of Tehran

MEK supporters from the capital city of Tehran reported that the people gathered in front of the Social Security Organization’s offices. The protesters were heard calling for their income to be adjusted. They emphasized their situation, saying that they are living “empty-handed” while officials are living with great comfort. They were also heard chanting that they are “fed up with this injustice”.

Protest in the city of Isfahan

MEK supporters from the city of Isfahan reported that the protesters in Isfahan gathered in front of the local social security offices there, where they chanted “Enough with the tyranny! Our tables are empty!”.

Protest in the city of Ahvaz

MEK supporters from the city of Ahvaz reported that the protesters gathered in front of the social security building there were heard chanting: “No nation has seen such injustice.”

Protests took place in a number of other parts of the country, including Arak, Ardebil, Bojnurd, Ilam, Karaj, Kermanshah, Khorramabad, Neyshabur, Qazvin, Shushtar, Tabriz, and Yazd.

Many pensioners and retired government workers are finding their lives extremely difficult at the minute. The very poor income that they were receiving has decreased significantly over the past few years.

living under the poverty line

In just a few short years, the rial, Iran’s national currency, has lost more than 80 percent of its values. This means that the majority of pensioners in Iran are living under the poverty line. Even the regime itself has admitted that more than three-quarters of all retirees are under economic strain.

Article 96 of the welfare law states that pensioners in Iran should be able to meet the most basic of needs and this is why the protesters are on the streets. They want this to be implemented.

They are also calling for free health care and want the government to deal with their demands urgently. Failing this, it is certain we will see pensioners continue with their protest rallies in the upcoming weeks and months. 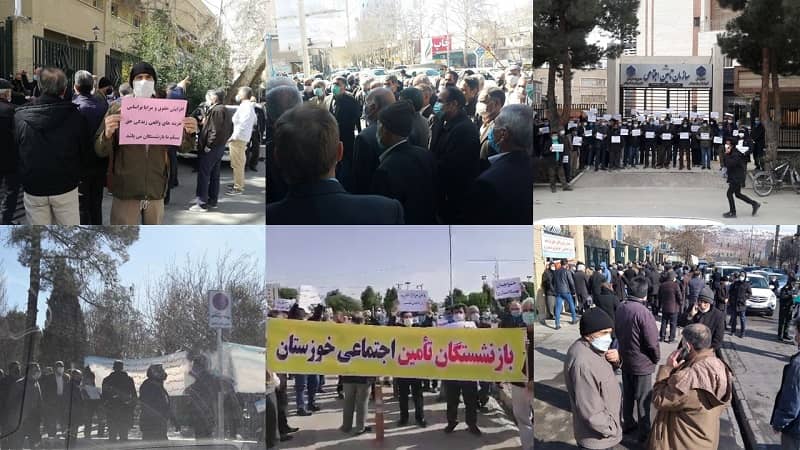 (NCRI) and (PMOI / MEK Iran): Hundreds of retirees and pensioners living on social security held rallies in 21 cities across Iran for the third consecutive week – February 21, 2021.