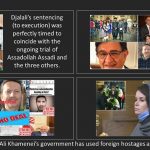 MEK: Hostage Taking by Iran a Sign of Iran’s Confidence

Written by Amineh Qaraee on February 22, 2021. Posted in NEWS

The Iranian regime continues to use foreign hostage-taking as a bargaining tool to get what it wants. It’s not always successful, as evidenced by the recent inability to blackmail the Belgian government into releasing diplomat terrorist Assadollah Assadi in exchange for Swedish Iranian dual national Ahmadreza Djalali.

The  National Council of Resistance of Iran (NCRI), and the People’s Mujahedin of Iran (PMOI / MEK Iran) reported that the fact that Iran continues to adopt this strategy implies that it is often successful. Unfortunately, it is the lenient attitude that Europe, in particular, adopts towards Iran that allows them to think that they can get away with their atrocious tricks.

The case of Djalali is typical of how Iran uses imprisonment of foreign nationals as a bargaining tool when its own nationals have been accused of a crime in another country. The only difference is that Iranians who have been arrested outside of Iran like Assadi have genuinely committed some kind of heinous crime such as plotting to blow up a rally by Iranian opposition the  National Council of Resistance of Iran (NCRI), and the People’s Mujahedin of Iran (PMOI / MEK Iran) just outside of Paris.

The hostages that Tehran takes are for the most part innocent victims of a criminal strategy by the regime itself. Most hostages are dual nationals visiting their old homeland to see relatives or attend conferences or meetings. Sometimes their crime is that they are married to an Iranian who the regime thinks is a political enemy or even that they happen to them in the wrong place at the wrong time like two young Australian travelers passing through the country on their way around the world.

The attempt by Iran to use Djalali as a hostage to secure the release of Assadi failed because in this case Belgium, the country where Assadi was being tried, refused to give in. Djalali was an Iranian born Swedish national, but had also spent time living and working as an academic in Belgium, making him prime material in the Iranian regime’s thinking as a hostage. He had been arrested and accused of spying and sentenced to death.

The fact that the execution was planned to coincide with Assadi’s final sentencing was too much of a coincidence, but the Belgian government said that if Djalali was executed, Belgium would promptly cease all diplomatic ties With Iran and the regime would face future unspecified pressure.

The threat was enough for Tehran to back down, although Djalali is still in prison, presumably waiting for another attempt by the regime to extract a prisoner exchange or other gain at a later date.

Two other foreigners were seized more or less at the same time as Assadi was sentenced. One was a dual national, French Iranian, the other a German national. Little is known of their supposed crimes, but apparently one of them had been using a drone in the desert, similar to the two Australian travel bloggers who were arrested back in 2019.

Belgium not only refused to back down on the terror trial of #Iran diplomat Assadi, accused of attempting to blow up a 2018 Free Iran rally by #NCRI and (#MEK #Iran) near Paris but also said that they would end relations with Iran if Djalali was executed.https://t.co/naJZvhzDxk pic.twitter.com/YPKZJr0IRL

The two Australians were released after a few months seemingly in a prisoner swap arrangement similar to a previous one in 2016 in which four Americans were released during the implementation of the nuclear deal between Europe, Obama’s U.S. administration, and Iran.

In that deal, Obama released 21 Iranians held in the U.S. and even gave the regime 700 million dollars in what was effectively ransom money although concealed as partial repayment for an outstanding debt for arms sales to the pre-revolutionary Iranian government.

It is unfortunate that Europe, in particular, seems to be ignoring Iran’s hostage-taking tactics and plowing ahead with renewing economic ties with Iran as has been evidenced by the recent decision to go ahead with the previously canceled Europe-Iran Business Forum, led by Josep Borrell, the EU’s head of foreign policy.

Borrell has overlooked that Iran’s own diplomat was recently sentenced on a terrorist charge, a crime that could have led to hundreds of European citizens maimed or killed as well as Iranian opposition figures at a rally near Paris.

The fact that Borrell is determined to deliver a keynote speech alongside Iran’s Foreign Minister, Mohammad Javad Zarif, long associated with one of Iran’s worst ministries, the Ministry of Intelligence and Security (MOIS), is a sign that Europe is continuing a policy of appeasement with Iran. This policy is unlikely to make Europe any safer as it gives the regime in Iran a reason to feel that it is immune from criticism.