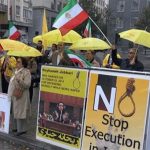 Written by Mohsen Aboutalebi on February 21, 2021. Posted in NEWS

(NCRI) and (PMOI / MEK Iran): MEK supporters during a rally ask for an end to executions in Iran.

The Iranian regime continues to unleash human rights violations as it approaches the 2021 presidential elections, showing it has no interest in moderating what is probably the worst rate of executions per head of population in the world.

The National Council of Resistance of Iran (NCRI), and the People’s Mojahedin Organization of Iran (PMOI / MEK Iran), reported that since the so-called moderate, Hassan Rouhani became President of the country there have been at least 4,000 executions.

There have been at least 114 women executed since Rouhani became President, the latest being Zahra Esmaili, who was hanged even after she had actually died of a heart attack. It is thought that she may have suffered a heart attack after witnessing the hangings of 16 people previously.

Esmaili’s lawyer said: “I saw Zahra Esmaili’s death certificate today. It states cardiac arrest as the cause of death because 16 men were hanged before her eyes yesterday. Zahra’s heart stopped, and she died before she was taken to the gallows.”

It’s hard to imagine just what goes on in Rouhani’s Foreign Minister, Mohammad Javad Zarif’s head when he boasts that Iran is “the greatest democracy” in the Middle East.

(NCRI) and (PMOI / MEK Iran): MEK supporters in Geneva, call for justice for the 1988 massacre of 30,000 political prisoners in Iran (mainly MEK activists).

According to Amnesty International, the next two people awaiting execution are Baluchi prisoners. Amnesty released a statement saying that: “Death row prisoners from Iran’s Baluchi ethnic minority, Hamed Rigi and Mehran Naru’s, are at risk of execution. They have been subjected to serious human rights violations including enforced disappearance and torture and other ill-treatment to extract ‘confessions’ used to convict and sentence them to death in unfair trials.” 18 other Baluchi males have been executed by the regime since mid-December 2020, according to Amnesty.

Iran’s Chief Justice is Ebrahim Raisi, who was one of the main perpetrators behind the 1988 massacre of 30,000 political prisoners in Iran, so it is not surprising that the level of terrific treatment, beatings, torture, and executions continue in modern-day Iran when monsters like that are in charge of the justice system.

Seven U.N. human rights experts highlighted the failure to bring those responsible for the 1988 massacre to justice in a letter they wrote addressed to the regime and released to the U.N. in September last year. “To date, no official in Iran has been brought to justice, and many of the officials involved continue to hold positions of power including in key judicial, prosecutorial, and government bodies responsible for ensuring the victims receive justice,” they noted in the letter. The 1988 massacre “had a devastating impact on the survivors and families as well as on the general situation of human rights in Iran,” they added.

That devastating impact hasn’t stopped. It continues as witnessed by the number of executions still continuing, while it appears the international community has largely averted its eyes.

The regime, or at least its own media, is alert to the fact that Iranian society is restive.  “If the economic conditions do not change and continue to increase, we will see disorders in society … Gradually this disorder and chaos will pervade all social classes,” wrote the state-run Mardom Salarie daily on February 15th.

In its effort to keep the population under strict repressive control, the Iranian regime has created its own ticking time bomb. No-one really knows when this home-made bomb is going to blow up in the face of the regime, but nothing the regime is presently doing seems to be aimed at defusing it.

The international community has an opportunity to put pressure on the Iranian regime to mend its ways but appears to be putting its own commercial and economic interests before principle. This policy of appeasement is just going to embolden the regime in Iran to continue with its present course as it sees no reason to change.

(NCRI) and (PMOI / MEK Iran): Mrs. Maryam Rajavi: The call for repression and naked violence reflects the clerical regime’s fear of an uprising by the people of Iran, who are not satisfied with anything less than the regime overthrow

A good example of the attitude of the E.U. towards Iran is the saga of the Iran-Europe business forum. This was originally scheduled for December last year but was canceled after the execution of Ruhollah Zam, a French Iranian in Iran. But now a new date has been set for the forum to begin. Josep Borrell, the EU’s head of foreign policy, knows only too well what unspeakable deeds the regime he wants to negotiate with has been doing. The conviction of Iran’s own diplomat terrorist, Assadollah Assadi, on terrorism charges in Belgium recently seems to have been ignored, in the rush to normalize business agreements with Iran.

European leaders should understand that its attitude towards Iran is not helping its own internal security and is likely to make Europe less safe as the regime in Iran feels that it can do what it wants when it wants and wherever it wants. The E.U. should ensure that any cooperation with Iran will only take place if the regime halts its run of human rights violations.