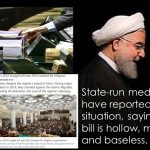 MEK Iran : Government and Parliament Ignore Objections and Major Issues in Order to Get Bill Passed

Written by Esmail Mohades on February 20, 2021. Posted in NEWS

(NCRI) and (PMOI / MEK Iran): unrealistic budget, there were months of debates and queries with many wondering if the bill would ever pass.

The Iranian government’s budget bill for the next Persian year (starting next month) has finally been approved by parliament (Majlis). The National Council of Resistance of Iran (NCRI), and the People’s Mujahedin of Iran (PMOI / MEK Iran) reported that there were months of debates and queries with many wondering if the bill would ever pass.

The considerations of the Majlisto get the bill passed

The Majlis official news agency, the ICANA, reported earlier this week that “the considerations of the Majlis” were taken into account and the government’s “change of opinion” after listening to the MPs were the reasons behind approval finally being granted. It said that parliament was happy with the government’s plans to reform the economy.

The major issues that have cropped up since the bill was first presented were the regime’s source of income and the government-specified US dollar exchange rate.

(NCRI) and (PMOI / MEK Iran): There is no indication of how the Iran regime will manage to function based on a budget whose sources of income are so dubious.

Considering half the bill depends on oil

The budget bill was based on the regime selling 2.3 million barrels of oil per day. Although it was approved earlier this week, there are questions about the practicalities considering half the bill depends on oil.

Last year, one MP ridiculed the budget bill, saying that it could not be taken seriously considering the dependency on income that simply does not exist.

(NCRI) and (PMOI / MEK Iran): Since March, the coronavirus has paralyzed much of the country’s economy.

The objections and queries have been ignored

But now, the disputes have somehow been resolved and all of the objections and queries have been pushed to the side and the bill has been approved.

Regarding the currency exchange rate that posed many problems and objections when the bill was first presented, this too was pushed to the side.

The government is stealing from the people

The government is effectively stealing from the people, impacting the lives of many, in particular the lower and middle classes. The state-run Reselat publication reported earlier this month that since 2018, the government has made more money from the 42,000 rial exchange rate “than the entire yearly cash handouts being offered to the needy”. It went on to say that money went straight back into the pockets of those with access to this rate. Those with access to the more favorable exchange rate were able to sell it at free-market rates.

The head of the Budget and Planning Organization hinted that the disputes were resolved over an agreement to keep the 42,000 exchange rate in place for the first 6 months of the new Persian year. So rather than coming together to put an end to economic corruption, the regime has come together to further plunder the nation’s wealth.