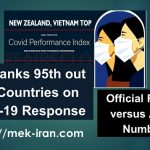 MEK: Iran Ranks 95th out of 98 Countries on Covid-19 Response

Written by Jennifer Jones-Kelley on February 5, 2021. Posted in NEWS 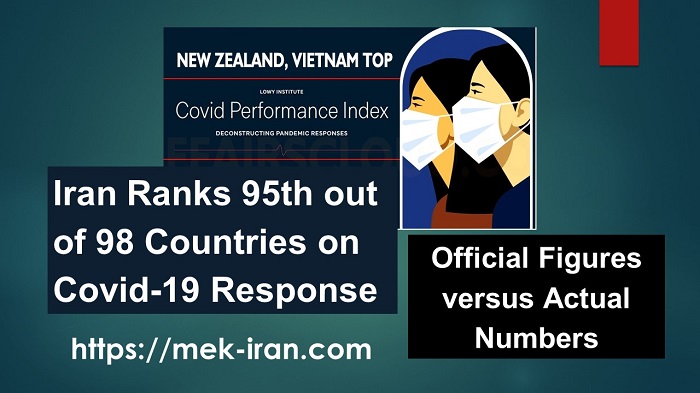 On January 27, the Australia-based Lowy Institute released a performance-based index of 98 countries’ responses to Covid-19. Iran ranked 95th out of 98 countries in the index, outperforming only Colombia, Mexico, and Brazil.

Over 211,000 people have died of the coronavirus in Iran, according to reports tallied by the Iranian opposition The People’s Mujahedin of Iran (PMOI / MEK Iran) and the National Council of Resistance of Iran (NCRI).

More than 211,000 people have died of the novel #coronavirus in 480 cities checkered across all of Iran's 31 provinces, according to the Iranian opposition PMOI/MEK.

How Was the Index Created?

The countries in the index were sorted by region, political system, population, and economic development in order to eliminate external factors and provide an accurate accounting of how well governments responded to the pandemic.

The Lowy Institute tracked each country for a 36-week period after it reported its 100th confirmed case of Covid-19. Researchers calculated 14-day rolling averages for new data along with six indices:

Iran’s dismal ranking is deeply concerning on its face, but it becomes even more alarming considering that the Lowy Institute used official numbers for its data collection. The MEK and numerous international medical experts have long held that the regime’s Ministry of Health has underreported Covid-19 cases and fatalities. Even the regime’s own health officials have challenged the veracity of the Ministry of Health’s figures.

On April 28, 2020, the state-run Vatan-e Emrouz daily ran a story about the daily Covid-19 death toll. According to the regime, 5,877 died the previous day, but National Covid-19 Task Force member Mohammad Reza Mahboub-Far was quoted by the daily contracting that number.

“The current stats of the coronavirus illness are 20 times higher than what is being announced by the Health Ministry. This has resulted in the people not taking this lethal illness seriously,” Mahboub-Far said.

According to reports from the MEK, more than 35,600 people in 301 cities in Iran had died from Covid-19 at the same time the Ministry of Health reported its data or approximately six times the number reported by the regime.

Iran ranked 95th out of 98 countries for its Covid-19 response based on false numbers that were meant to paint a regime in a more positive light. Does one wonder what the actual numbers would show?

On February 1, 2021, the MEK reported that more than 209,700 people in 480 cities in all 31 provinces in Iran have died from Covid-19. The Ministry of Health has confirmed 53,038 of these deaths or approximately one-third of the total fatalities.

Even the regime’s figures make Iran the country with the second-highest Covid-19 death rate per capita. In an August 19, 2020 interview with TV Channel Five, National Covid-19 Task Force member Hamid Souri discussed his alarm over the Covid-19 death rate in Iran.

“We had the second-highest rate of death today after Mexico. Well, this is very scary. Yes, we now have the average coronavirus death in our country, which is about what happened today, something about 17 times, 17 percent of the world average. While we have 1.1 percent of the world population,” he said.

Khameini issued a fatwa banning the import of vaccine

Unfortunately, the situation is unlikely to improve in the foreseeable future. The Iranian regime has taken few if any, steps to mitigate the disaster, and the death toll continues to mount.

Also, while the rest of the world fights over vaccine shipments, Supreme Leader Ali Khameini instead issued a fatwa banning his government from purchasing vaccines made by U.S., French, or U.K. companies.

Khamenei’s decree is essentially a death warrant to the Iranian people who will die of Covid-19 before adequate supplies of vaccine can make their way to Iran from other countries.