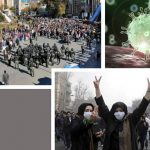 Written by Amineh Qaraee on January 30, 2021. Posted in NEWS

(NCRI) and (PMOI / MEK Iran):  The Iranian regime is afraid of uprising amid the coronavirus crisis.

Society in Iran has been simmering with discontent for many years, but the situation has got worse over the past few years. There have been a number of major uprisings in the past five years and had it not been for the Coronavirus pandemic, there would surely have been one in the past six months.

The main opposition to the Iranian regime, The  People’s Mojahedin Organization of Iran (PMOI / MEK Iran), and the National Council of Resistance of Iran (NCRI), has reported that there have been large rallies in a number of Iran’s biggest cities after a call to protest.

Many of those that participated in activity throughout this past week were social security pensioners and retirees. Many of them are living insufferable lives because of illness, poverty, and tough living conditions.

According to reports tallied by (PMOI / MEK Iran) supporters inside Iran, the demonstrators emphasized that their meager pensions are insufficient and they vowed to continue pressuring the authorities until they are heard and have their rights respected. 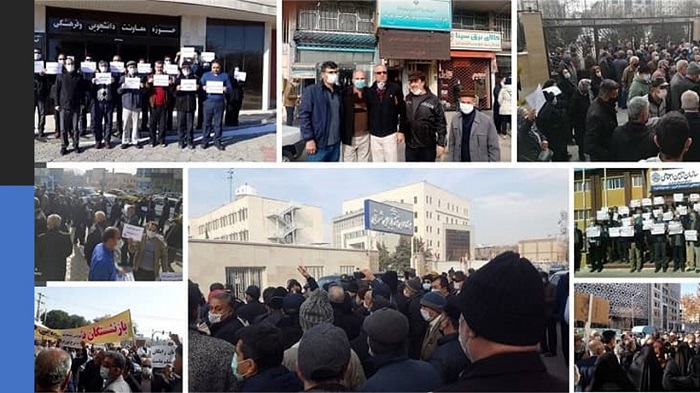 (NCRI) and (PMOI / MEK Iran):  Numerous protests held across the country despite regime’s crackdown on dissent.

Cracking down on any gatherings

The Iranian regime is very worried about protesters and gatherings being held because of the potential of them growing too large for the security forces to handle. For this reason, it has been cracking down on any gatherings in recent times, including on the pensioners that gathered earlier this week.

President-elect of the National Council of Resistance of Iran (NCRI) Mrs. Maryam Rajavi hailed the brave retirees paid tribute to them for courageously taking to the streets to make their voices heard despite the threat posed by the regime’s security forces.

Other sectors of society have also been protesting across the country. In Isfahan, farmers and their families gathered earlier this week to march towards the governorate’s office. They called on authorities to grant them their rights with regard to irrigation water. They shamed the authorities because of their conduct.

Nurses also gathered to protests against the tough working conditions they face and the lack of adequate wages. A directive was issued a while ago to increase the salaries of medical workers, but many nurses are getting fed up waiting. The regime’s refusal to help the front-line workers is shameful, especially as they have risked so much to help the people through the health crisis.

State-run media outlets are warning that the people’s anger is mounting and that if the regime does not take drastic action to quell discontent, the consequences are going to be very serious.

Not only has the Iranian regime destroyed the country’s economy, but it has also made the people’s lives very difficult because of its oppression and violent suppression. Many freedoms have been denied to the people and it is very difficult to see an end in sight, especially as the Coronavirus pandemic continues to claim many lives every day in Iran.

The only certainty at this time is the people’s desire to see the regime collapse.