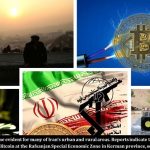 Written by Amineh Qaraee on January 18, 2021. Posted in NEWS 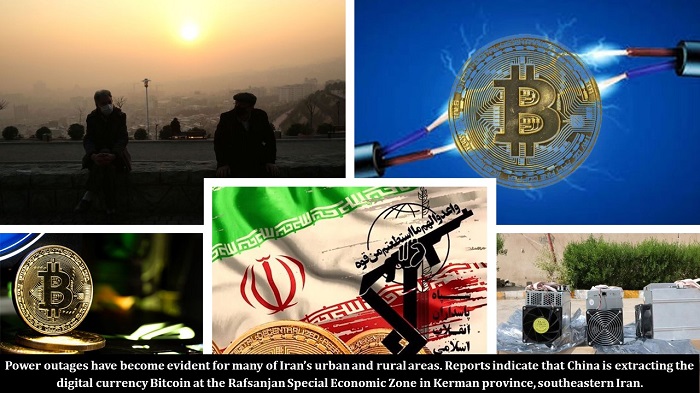 (PMOI / MEK Iran): In order to lower the country’s budget deficits, the government has used mazut to supply power to the supply plants and not gasoline and proper fuels.

Power outages have become evident for many of Iran’s urban and rural areas. The National Council of Resistance of Iran’s (NCRI), and the People’s Mojahedin Organization of Iran (PMOI / MEK Iran), reports that China is extracting the digital currency Bitcoin at the Rafsanjan Special Economic Zone in Kerman province, southeastern Iran.

According to media sources, the government has granted low-priced electricity to the Chinese-held center to extract bitcoin, allowing power outages to disrupt people’s lives and jobs.

#Iran: Power Outages in Winter, a Result of the Regime's Plundering Policies, Especially of the Revolutionary Guards and Khamenei's Institutions – NCRI https://t.co/slPso1esMX

Mostafa Rajabi Mashhadi, speaking for the electricity providers, said that the ‘miners of digital currency’ are the reasons for the surge in power consumption. However, the government has said that the power plants’ fuel shortage is the main reason for the greater power outages throughout the country.

Massoud Nouri, a ‘so-called reformist’ journalist, suggested that a deal that has been taking place between the Chinese and a military institution to do with cryptocurrency mining. He tweeted that through coordinating with a ‘military body,’ ‘the Chinese’ have now established a cryptocurrency mining center in the Rafsanjan Special Economic Zone. They have been gaining access to the country’s low-price electricity with cheap tariffs offered to them.

Power Outages in #Iran as #China Extracts Its #Bitcoins https://t.co/e2N3NKjYxt via @Iran_Focus

Nouri also said that they have begun the plan’s phase 1 with about 10,000 devices of very low-efficiency M-3. At the moment these devices are extracting bitcoin in this center.

Iran’s blockchain association also reported that the Chinese had a cryptocurrency mining center in the vicinity of 230/33-kilovolt ferrochrome for the Rafsanjan power transmission station and that this center consumes 175 megavolts of power daily.

The extraction of one bitcoin is equal to the yearly power consumption of 24 houses in Tehran. On January 12th, each bitcoin was estimated to have a value that exceeded $36,000, so tempting many people to get involved in this extraction of digital currency. Iran’s Electricity Industry spokesperson has confirmed that there has been an increase in the number of bitcoin miners within the country.

Road lights were switched off throughout the night

There have been many reports of a hike in electricity prices and un-notified power outages taking place in recent weeks. In videos on social media, citizens show that road lights were switched off throughout the night, which heightens the chance of road accidents taking place in Iran’s already unsafe commuting corridors.

In order to lower the country’s budget deficits, the government has used mazut to supply power to the supply plants and not gasoline and proper fuels. This has intensified air pollution in Tehran and many major cities. Iranian dissidents claim mazut and diesel pollution increase the COVID-19 death toll to 6 times the national rate.

The Oil Minister Bijan Zangeneh and the Chief of Environment Organization, Isa Kalantari, blame the people by saying, “to stop using mazut [for plants], the people must decrease power consumption.”

In 2019, an advisor to President Hassan Rouhani established the Rafsanjan Cryptocurrency Mine under a data center’s banner. At that time, the Rafsanjan Governor, Aliar Eskandari, described this facility as the greatest datacenter in the middle east. However, many media sources reported that it is a cryptocurrency mining center. Later on, cryptocurrency specialists uncovered that Tehran had given the ferrochrome factory’s electricity to the Chinese Top Echo company for a small price. At the inauguration ceremony, the CEO of Rafsanjan Special Economic Zone Majid Kohnavi spoke about ‘excess electricity.’

He said “today, we witness excess electricity, and the electricity is not a preservable good. Therefore, the Energy Ministry sells this electricity to miners based on the export price.”

In 2019, Tehran added an extension to its economic deal with the Chinese government for 25 more years, which led to objections within the country and abroad. Basically, the government granted numerous privileges in different fields to the Chinese and got nothing in return. It appears that the Rafsanjan Cryptocurrency Mine is another part of the ayatollahs’ 25-year deal with Beijing.