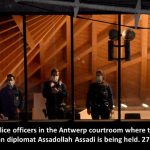 MEK Iran: Mullahs Regime Mobilizes to Keep a Diplomat-Terrorist Out of Jail

Police officers in the Antwerp courtroom where the trial of the Iranian diplomat Assadollah Assadi is being held. 27 November 2020. Johanna Geron / REUTERS

Le Monde: Foiled attack on Villepinte (France): Iran mobilizes to keep a diplomat out of jail. On 22 January a Belgian court will hand down its verdict on the Iranian agent accused of being behind the foiled bomb attack on an Iranian opposition, the National Council of Resistance of Iran’s (NCRI), and the People’s Mojahedin Organization of Iran (PMOI / MEK Iran), congress near Paris.

The tension in Belgian government circles is palpable, a few days before the court in Antwerp is due to issue its verdict, on 22 January, in the trial of four Iranians, including a diplomat, implicated in a planned attack on the opposition, (NCRI) and (PMOI / MEK Iran) to the regime in Teheran, due to take place at Villepinte, north of Paris, on 30 June 2018.

The Iranian authorities expressed their anger after the hearings in November 2020 and, through a Foreign Affairs Ministry spokesperson, indicated that they did not recognize the Belgian court’s jurisdiction. They maintained that the trial of the principal defendant, the diplomat Assadollah Assadi, was unlawful, arguing that Mr. Assadi, who refused to leave his cell, should have benefited from diplomatic immunity. Also, put forward by his defense in November, the argument was vigorously disputed by counsel for the civil parties.

An additional and hitherto unrevealed exhibit from the Belgian investigation confirms Teheran’s particular interest in the case. A memo was drawn up by the security services and transmitted to the federal prosecutor’s office, responsible for cases of terrorism, listed in August 2019 the many visits paid by Iranian officials to Mr. Assadi, then in custody in Belgian Limbourg.

14 officials in all held conversations with him, including the ambassador and counselors from the Islamic Republic embassy in Brussels, an Iranian doctor and lawyer living in France and Belgium, and five “visitors linked to an Iranian administration and based in Iran”, according to the memo. Arriving from Teheran as a delegation, they had told the Belgian authorities that they were from the Foreign Affairs Ministry. However, the Belgian authorities were able to identify only three of them.

In the course of a seven-hour hearing a few months later, Maryam Rajavi, president of the Congress of the National Council of Resistance of Iran (NCRI), the target of the bomb plot, is reported to have handed the investigators a note giving details of the role of some of the officials.

One was in fact a senior official of the Ministry of Intelligence and Security, responsible for supervising undercover agents on assignment in foreign countries. A special committee comprising representatives of the various services is said to have been set up in Teheran to monitor the case involving Assadi, who has threatened Belgium with reprisals if he is convicted. The public prosecutor has since demanded a 20-year prison sentence for him.

The diplomat, arrested in Germany as he was trying to make his way back to Austria, where he was the third secretary at the Iranian embassy, was the presumed sponsor and organizer of the plot against the NCRI Congress, attended by tens of thousands of people, including many leading politicians.

In Luxembourg, two days before the event in Villepinte, he handed over explosives and a detonator to a Belgian-Iranian couple, arrested in Brussels on 30 June 2018 on their way to Villepinte.

According to the lengthy investigation by the Belgian judiciary and state security service, the entire operation was planned at the highest level in Teheran, in conjunction with the accused, who had long worked for the Intelligence and Security Ministry. Jaak Raas, head of the state security service, said that the operation had been conceived “in the name of Iran and under its leadership”.

The diplomatic cover expelled from France

This version was confirmed at the time by the French authorities. Paris has frozen the (non-existent) assets of the Iranian deputy minister of intelligence responsible for operations, of Assadollah Assadi, and of a directorate of the Iranian intelligence ministry. An Iranian spy acting under diplomatic cover was also expelled in September 2018. However, the French authorities have been urged to show discretion, in particular, so as not to endanger the nuclear agreement with Teheran.

In all events, it is unlikely that the Iranian regime will fail to react to a judgment by the Antwerp court deemed too harsh on the defendant. The recent death sentence passed on Ahmad Reza Djalali, a professor at the Flemish Free University of Brussels, has been seen as a warning in Brussels.

The Iranian-Swedish doctor, arrested in 2016 during an assignment in Teheran, has been accused of spying for Israel. Mr. Djalali was placed in solitary confinement shortly before the start of the trial in Belgium. His execution was then postponed. In late December, Belgian MPs approved a motion demanding his release and denouncing a “hostage situation”.

The arrest last autumn of Nahid Taghavi, a retired German-Iranian architect held in solitary confinement in Evin prison, is seen as a message to Germany, which arrested Mr. Assadi before handing him over to the Belgian authorities.

In November 2020, the Australian-British academic Kylie Moore-Gilbert, charged with spying, was freed after 800 days in exchange for three Iranians implicated in a planned attack on Israeli diplomats in Thailand.

Will Belgium soon be faced with a similar dilemma, when there are numerous calls to save Mr. Djalali? “The question may arise for the government, but I don’t know a single judge who would consent to such horse-trading”, says one MP, a member of the foreign affairs committee at the federal parliament.