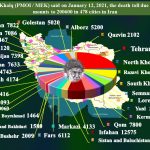 Written by Amineh Qaraee on January 13, 2021. Posted in NEWS 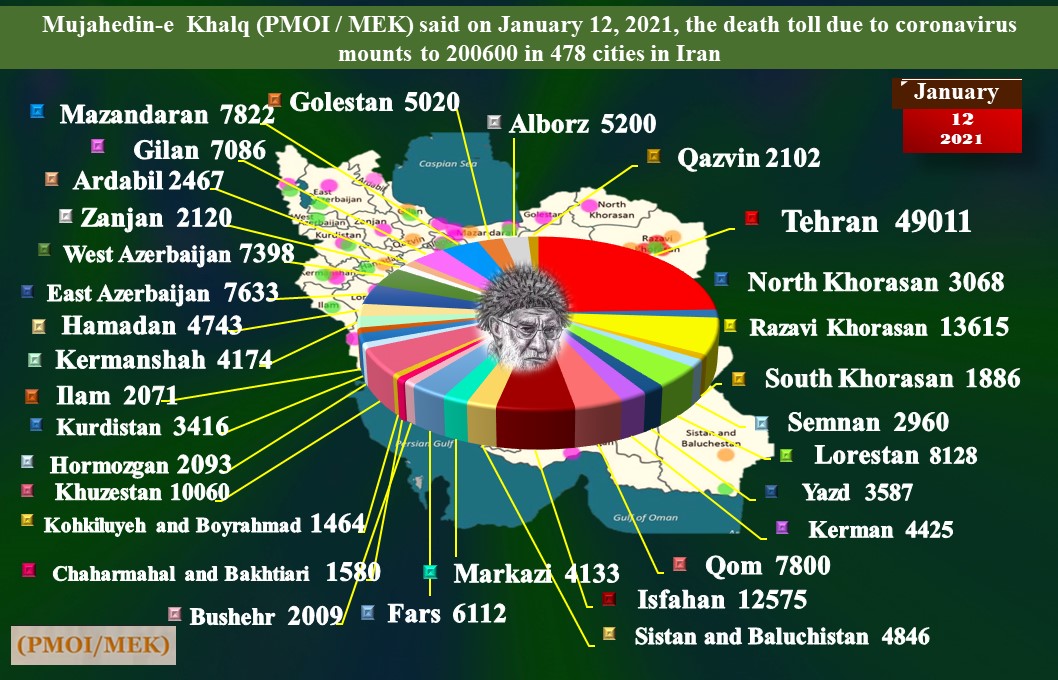 The Iranian regime insists that its coronavirus death toll is just 56,000, which is much lower than that of Western countries with smaller populations and better access to healthcare, but The National Council of Resistance of Iran (NCRI), and the People’s Mojahedin Organization of Iran (PMOI / MEK Iran) report that the true figure is over 200,600 and one of the worst in the world.

These figures come as Supreme Leader Ali Khamenei said Friday that the regime would not seek or accept coronavirus vaccines manufactured in the United States or Britain, which just so happens to rule out the current top approved ones – Pfizer, Modena, and Oxford-AstraZeneca – and confirms rumors that began circulating after the country’s Red Crescent arranged the distribution of 150,000 Pfizer vaccine doses bought by unnamed American philanthropists.

These doses, which could have saved 75,000 Iranians, will now probably go elsewhere, but that is just the start of the damage this will do to Iranians. Not only will these people still have to navigate earning enough to feed their family whilst trying to avoid a deadly disease, but the rest of the 80 million Iranians have no hope of receiving a proven vaccine anytime soon.

And it’s not like the regime couldn’t afford this. Khamenei has hundreds of billions of dollars at his disposal, some in foundations that are supposedly meant to help the poor, and he will release none of it to vaccinate the people, which will mean that the disease is with the people for years to come and cause the deaths of hundreds of thousands more.

Khamenei preserving its hold on power

According to MEK analysis: “It is, of course, shocking to think of, but that prolonged crisis may be exactly the point. The regime’s decisions and systematic inaction are in terms of a desperate and ruthless pre-occupation with preserving its hold on power. That preoccupation only intensified in the run-up to the pandemic, as the regime greeted that situation while still reeling from a series of mass uprisings that called for the overthrow of the theocratic system.”

These uprisings, which happened in 2017, 2019, and 2020 saw heavy crackdowns by the regime with thousands of protesters shot dead in the streets and many more arrested, were leading to a bigger uprising; a revolution that would have overthrown the mullahs for good.

The crackdowns, no matter how harsh, could not stop the protests, but the outbreak certainly dampened things, so the regime decided not to address the pandemic, but rather allow Iranians to die so that they could keep their shaky grasp on power.

According to MEK analysis: “For these reasons, the responsibility of managing the crisis cannot be left with Khamenei’s regime. The international community must step in to put extreme pressure on that regime and convince it to accept available vaccine doses and other treatments, as well as independent monitoring of the regime’s broader response to the crisis.”

MEK analysis warned that the regime’s plan was likely to backfire anyway, with the people rising up anyway and destroying the regime.

The delay in purchasing and importing the COVID19 vaccine is the continuation of the mullahs regime’s criminal policy, which will continue to claim more victims among the deprived and oppressed people.
Instead of paying the salaries of workers through the vast resources of the financial conglomerates controlled by Khamenei and the IRGC, they sent the Iranian people to the killing field of Coronavirus, and today, by banning the import of vaccines, they are creating even a bigger disaster.