Written by Mohsen Aboutalebi on January 10, 2021. Posted in NEWS

(NCRI) and (PMOI / MEK Iran): the new enrichment is known to be happening at Fordow, a well-known facility, which was selected to be the site for such activity because it has been built into a mountainside in order to evade a potential attack on the facility.

Foreign Ministers who represent the 3 European signatories to the 2015 Iran nuclear deal responded condemned the action this week when the mullah regime claimed that it had started again with its enrichment of uranium to 20%. This action comes about 12 months after Iran gave up with all of the restrictions it had imposed on its nuclear enrichment and stockpiling in 2016 when the deal was activated.

#NCRI& #MEK has reported that #Iran’s theocratic regime has announced its determination to enrich its uranium stockpile up to 20%, well beyond what is allowed according to (JCPOA) although still far short of the 90% enrichment needed for a nuclear warhead. https://t.co/oTtSd4MN2W pic.twitter.com/sHt243rthm

20% Enrichment and Paving the Way for Higher Enrichment

The National Council of Resistance of Iran (NCRI), and the People’s Mojahedin Organization of Iran (PMOI / MEK Iran) reported that this latest escalation has particular significance because it clearly places Iranian nuclear facilities just one short technical step away from more enrichment of uranium to reach the 90% level, which means any material would be of weapons-grade standard.

Additionally, the new enrichment is known to be happening at Fordow, a well-known facility, which was selected to be the site for such activity because it has been built into a mountainside in order to evade a potential attack on the facility.

Both Europe and the United States have shown they have no intention of preventing Iran from continuing with its violations. Even though the US is still applying “maximum pressure” by using economic sanctions for the moment at least, its European allies don’t show any interest in moving in that direction.

Mullah regime’s current President, Hassan Rouhani, and his Foreign Minister, Javad Zarif, are apparently moderated. These two have held their positions for at least 2 years before the ending of negotiations that initiated the Joint Comprehensive Plan of Action. At the same time, both of the two men have been spending a lot of time promoting and defending the actions and goals of their “rival” faction, the “hardliners” associated with clerical Supreme Leader Ali Khamenei.

Rouhani’s previous career included a time as the country’s chief nuclear negotiator, where according to his own words had forestalled U.S. and European pressures by creating an environment that showed cooperation so that Tehran was free to get on with advancements regarding certain aspects of its nuclear program which were not being closely watched by outsiders.  Whatever the outcome, both “hardliners” and “moderates” will act together to promote new provocative activities. 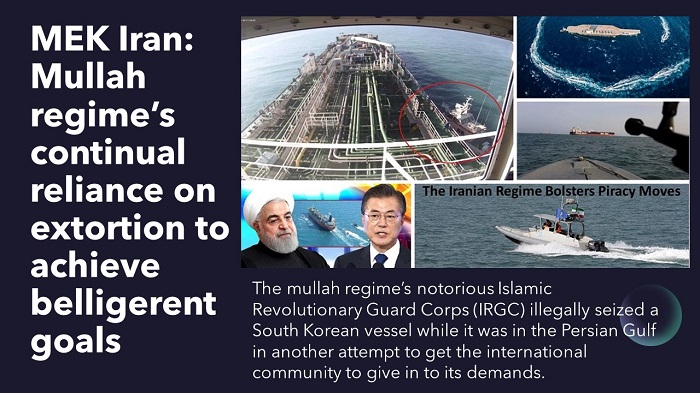 Belligerence and acts of terrorism

It is already showing its power by its capture and holding hostage of a South Korean-flagged tanker seemingly hoping hopes to secure the release of money frozen in South Korean banks.

It has many times been accused of terrorist kidnapping when trying to secure prisoner swaps from foreign adversaries. At the moment, the JCPOA violations could be a symbol of the likelihood of the possibility of Iranian nuclear weapons capability, which the EU would prefer to avoid.

these ambitions were shattered the Iranian opposition movement (NCRI) and (PMOI / MEK Iran).

If Iran refuses to face the consequences for its most recent violation, it will only have even more incentive to hold the nuclear weapons issue over the heads of its Western opponents, believing they will lose little and gain a lot.

If Europe continues to steer itself away from reinforcing the consequences for this, the mullah regime’s principle of taking hostages will be reinforced, and even more foreign nationals will be taken by the regime as hostages to be used to bargain with.

(NCRI) and (PMOI / MEK Iran): Nazanin Zaghari’s health condition is deteriorating due to a lack of medical care. Richard Ratcliffe, her husband has also been on a hunger strike in front of the Iranian regime’s embassy in London, demanding the unconditional release of his wife from prison.