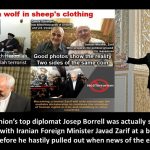 Written by Mohsen Aboutalebi on January 7, 2021. Posted in NEWS 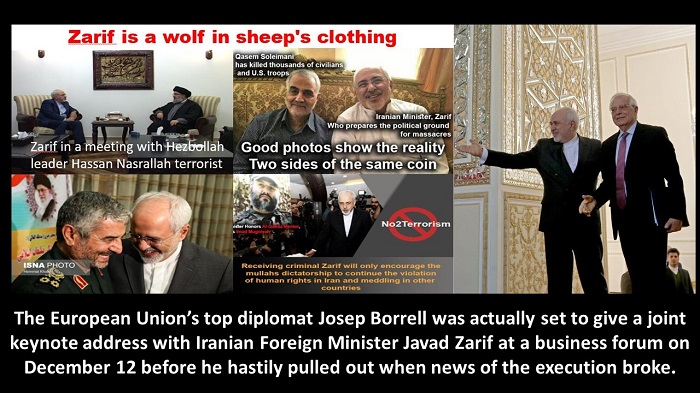 (NCRI) and (PMOI / MEK Iran): The EU’s failure to take these measures thus far has only emboldened the regime, thus, jeopardizing the lives of Iranians abroad as well as EU citizens.”

The National Council of Resistance of Iran (NCRI), and the  People’s Mojahedin Organization of Iran (PMOI / MEK Iran) reported that Iranian Foreign Minister Javad Zarif has again publicly admitted to being involved in terrorism, the whitewashing of terrorism, and being close to the now-deceased terror-mastermind Qassem Soleimani.

Zarif told state television on Sunday: “I knew Haj Qassem many years before I become a Minister or an ambassador. We had closely consulted each other in different periods. [Before I become Foreign Minister] Haj Qassem invited me to share thoughts on Syria a couple of times.”

#Zarif confirms his ties with #QassemSoleimani & His role in #Terrorism
"When I became a minister, I decided that we had to coordinate our works together. He was a commander who was the soldier of the Supreme Leader acting on his orders"#JCPOA #Iran https://t.co/i8e799v4Sg pic.twitter.com/jsayC1sxQL

Zarif said that upon becoming Foreign Minister, he decided to coordinate with Soleimani, who was the commander of the terrorist designated Quds Force, on “regional issues”. However, he quickly admitted that one of these issues was convincing Russia to join the Syrian Civil War on behalf of Dictator Bashar Assad, even covering what Zarif should say in talks with his Russian counterpart.

He was the commander of the Quds Force and oversaw the regime’s terrorism, as mandated by Supreme Leader Ali Khamenei to destabilize the region.

He managed to keep Assad in power by creating ruthless proxy militias and blind bombing Syrian cities. He was also influential in funding terrorist groups, including Hamas, which was acknowledged by a senior member of the terror group in December.

Iranians are suffering from increasing poverty, their wealth is being spent on the regime’s overseas proxy. Hamas received 22 million dollars courtesy of the assassinated Qassem Soleimani, who was in charge of supporting the #Iran regime’s terrorist adventures in the region. #MEK pic.twitter.com/i0bSwycj9Z

Further, he was responsible for the murder of hundreds of American and coalition forces in Iraq, following the 2003 invasion, with the use of roadside bombs or IEDs, as admitted on Sunday by Nader Talebzadeh, head of the Quds Force front organization “New Horizon”.

Despite all this, Zarif tries to whitewash Soleimani’s crimes and even portray him as a hero following his death in a US drone strike last January, something he also admitted on Sunday.

Of course, this should not be surprising, because Zarif himself has played an active role in terrorism. He facilitated the attempted bombing of the Iranian opposition, The National Council of Resistance of Iran (NCRI), and the  People’s Mojahedin Organization of Iran (PMOI / MEK Iran) rally in France in 2018 by diplomat-terrorist Assadollah Assadi, who went on trial in December 2020.

The Iranian Resistance wrote: “The recent remarks by Zarif and his role in facilitating terrorism, then whitewashing it, once again show there is no difference between officials of Iran’s terrorist regime.

The EU should stop its contradictory approach in dealing with terrorism. Zarif should be sanctioned and prosecuted for his role in terrorism. The EU should shut down the regime’s embassies and expel its agents. The EU’s failure to take these measures thus far has only emboldened the regime, thus, jeopardizing the lives of Iranians abroad as well as EU citizens.”