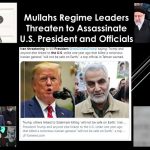 Written by Esmail Mohades on January 3, 2021. Posted in NEWS 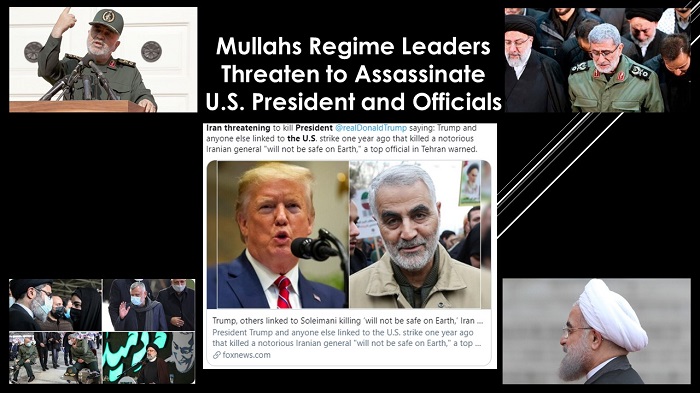 The National Council of Resistance of Iran (NCRI), and the People’s Mojahedin Organization of Iran (PMOI / MEK Iran) reported that on Qassem Soleimani’s death anniversary, a notorious commander of the terrorist Quds Force, one after the other, the mullahs regime’s leaders, Threaten to Assassinate U.S. President and Officials. Mullah’s regime exploiting the transition of power in the United States by threatening to assassinate the U.S. President and other officials involved in Soleimani’s assassination.

The objective of this terrorist chorus is to intimidate the officials of the next U.S. government in a bid to gain concessions.

On December 31, 2020, mullah’s regime president Hassan Rouhani told the State-run Television: “Trump will be overthrown in the coming weeks, not just from government, even from living… The people of the region and Iran will avenge for shedding the blood of (Qassem Soleimani).”

On January the 1st 2021, Ebrahim Raisi, the regime’s Judiciary Chief, in remarks broadcast told the  State-run Television also threatened the U.S. President and other officials with assassination and “severe revenge”, saying that they should not think that “if anyone is in the position of the President of the United States”, he is untouchable. “None of them will be safe anywhere on the planet.”

On December 31, 2020, according to state-run daily Hamshahri, Esmail Ghaani, Soleimani’s successor, addressing the regime’s parliament,  said, “The American perpetrators must learn how to live in hiding like Salman Rushdie because the Islamic Republic will take Soleimani’s revenge.” He subsequently called out the U.S. President, the Secretaries of Defense and State, and warned them that they must “learn Salman Rushdie’s secret lifestyle.” He added, “Rest assured that even inside your homes (territory), there may be people who will make you payback for this crime.”

#Iran's IRGC Quds Force chief Esmail Qaani on @Twitter threatening the U.S. President, CIA chief, secretaries of Defense & State, and other U.S. officials involved in the killing of Qassem Soleimani.@jack, this account belongs to a terrorist. Does he enjoy special privileges? pic.twitter.com/SMVJiwffnI

On January the 1st 2021, the IRGC’s Commander-in-Chief Hossein Salami, was also, saying, “We will take retaliate against the perpetrators and those who instigated Soleimani’s death,” adding, “They will not live comfortably.”

On January the 1st 2021, Rahim Aqdam, the commander of an IRGC base in Syria named Zeinab, said, “Mr. Trump must take this blow from where he does not anticipate, and it will be a very, very major blow.”

Last week, on December 27, 2020, Hassan Nasrallah, head of the terrorist group, Hezbollah, reiterated that Khamenei had decreed that those involved in Soleimani’s death must be “harshly targeted in retaliation. Anyone who concludes that someone has been involved in this operation must retaliate against him. Besides Trump, anyone who was a decision-maker and agent of the operation should be the target of severe revenge,” reported Tasnim, IRGC’s Quds Force-affiliated news agency.

Iran threatening to kill President ⁦@realDonaldTrump⁩ saying: Trump and anyone else linked to the U.S. strike one year ago that killed a notorious Iranian general "will not be safe on Earth," a top official in Tehran warned. https://t.co/dtkgWJZ4CT

Rouhani, Raisi, and other leaders of the regime, as well as the Judiciary and regime’s media and propaganda apparatus, should all be included in the terrorist list for facilitating assassination and repression.