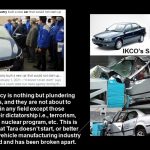 Written by Amineh Qaraee on January 3, 2021. Posted in NEWS 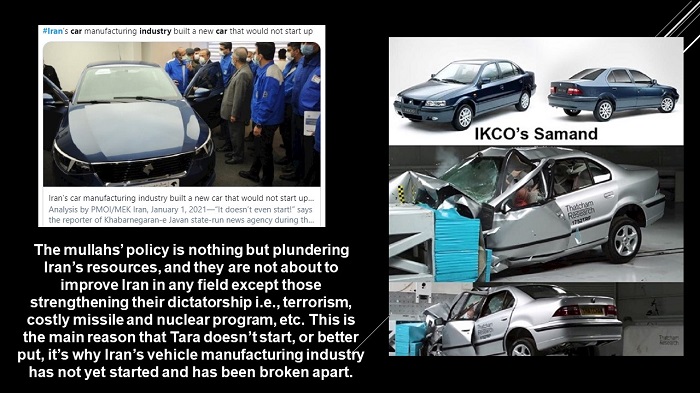 (NCRI) and (PMOI / MEK Iran): The mullahs’ policy is nothing but plundering Iran’s resources, and they are not about to improve Iran in any field except those strengthening their dictatorship i.e., terrorism, costly missile and nuclear program, etc.

The National Council of Resistance of Iran (NCRI), and the People’s Mojahedin Organization of Iran (PMOI / MEK Iran) reported that Iran does have a kind of car industry but the most recent model released, called ‘Tara’ would not start when it was unveiled in late December for the first time. The same incident with the same car happened at the beginning of the year when the Iranian regime’s president, Hassan Rouhani, tried to start it up in front of the press.

Iran Khodro, the largest carmaker in #Iran, unveiled their new "Tara" recently. During the ceremony, vehicle broke down and the engine didn't even start.

"The battery is dead," a man is heard saying.

And the exact same vehicle was introduced last year under a different name. pic.twitter.com/0dZCEbCdLE

Tara is similar to the Peugeot 301. It was manufactured by Iran’s oldest vehicle factory, the “Iran Khodro Company (IKCO),” founded in 1962 but it is wasting Iranians money because of its poor quality.

When the mullahs seized power in the revolution of 1979 IKCO was sheltered by the governmental National Industries Organization. The mullahs continued to produce these cars when they took over the company after the revolution.

Paykan was Iran’s National Vehicle up until 2005 and then the mullahs said they were going to replace it with the New Paykan using the design from the Peugeot 405 chassis. But after a lot of money was spent which was estimated to be around $2-3 billion the new Paykan has never actually reached the production line.

Not long after, an estimated one billion dollars was spent on designing a new “national car” called Samand, using the old model Peugeot 405 platform. Once manufactures it failed the safety tests done by Thatcham Research, a European New Car Assessment Program (Euro NCAP) at its accredited test facility in London. Again, it was a low performing, poor quality, car. These weren’t the only failings of Iran’s car industry.

SAIPA’s infamous car, Pride, which was manufactured in Iran until the summer of 2020 was referred to as a “mobile coffin” as it killed far too many passengers, reaching a figure of 2,454. It seems it was very poor quality. In this day and age, all the knowledge and technology are available to produce decent, safe vehicles but the regime just couldn’t produce anything that could match modern safety standards.

South Korean companies started manufacturing cars in 1967 and today it has become one of the most important world carmakers. One wonders why Iran couldn’t match these sorts of standards.

Both in the Shah and mullahs’ era, IKCO and other major factories were under the influence of corrupt policies of the regimes ruling Iran. The Shah did not want the industry to be independent, and the mullahs completely ruined the industry through corruption and incompetent policies. 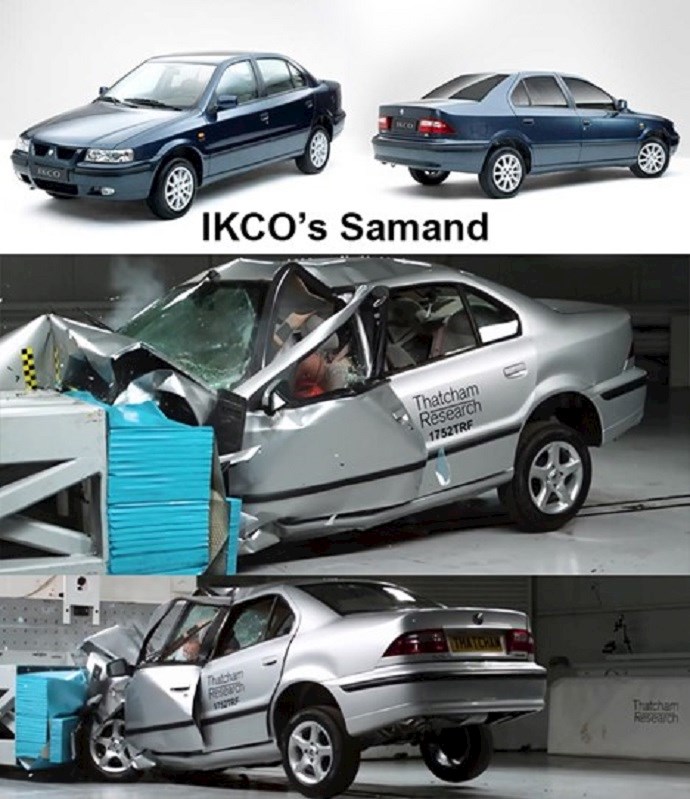 (NCRI) and (PMOI / MEK Iran): To date, IKCO has continued changing the design of its pre-made cars or combining different parts of various vehicles, pretending they are making new designs; however, to be fair, only their names are new.

The Mullah’s car monopoly the problem

The mullahs sold about 2 million Paykan and because they were operating a monopoly Iranians had no choice but to purchase such poor quality cars. All the profits from these dangerous cars found their way straight into the mullah’s pockets.

In 2017, Iran’s state-run TV revealed that Iran’s vehicle parts manufacturing industry is quite simply a mafia gang. A University of Science and Technology faculty member told Channel Three that the companies controlled by the authorities benefit from corruption when importing raw materials. “This mafia cannot carry out embezzlement if they work with universities to design and produce parts in Iran. But they can benefit from bribery and corruption when they import parts from abroad,” said Mohammad Hassan Shojaie.’’

The mullahs’ policy is nothing but plundering Iran’s resources

An IKCO employee said gangs directed the IKCO operations and each time a new president is replaced he brings with him his own gang and they put as much money as they can from the profits into their own pockets. A member of the regime’s parliament Ahmad Amir Abadi said in an interview in June 2020 that in the last 10 Majlis (parliament) at up to 8,000 employees at IKCO were hired after being introduced by MPs. One particular MP alone had introduced 300 people to IKCO.

All the mullahs seem to do is plunder Iran’s resources while also bolstering up their dictatorship through terrorism and implementing expensive missile and nuclear programs.