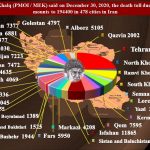 MEK Iran: Covid Toll Now Near 200,000 With No Sign of a Reliable Vaccine 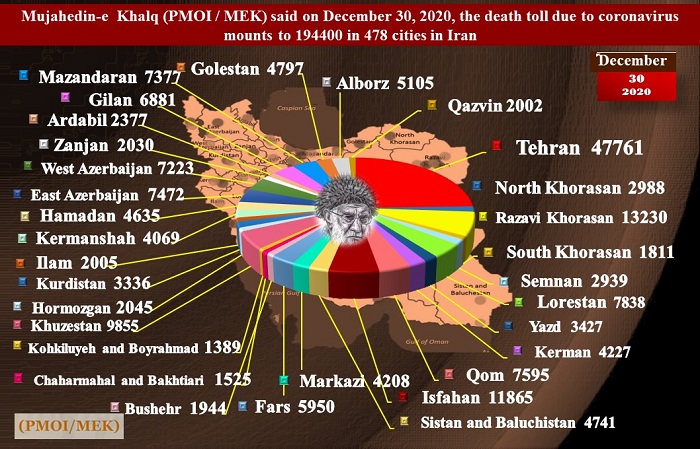 The novel coronavirus, also known as COVID-19, has taken the lives of over 194,400 people throughout Iran, according to the Iranian opposition (PMOI / MEK Iran) and (NCRI).

The death toll in Iran from Covid-19 is nearing the 200,000 marks despite the unreliable official figures being far less. The Iranian opposition the National Council of Resistance of Iran (NCRI) and the  People’s Mojahedin Organization of Iran (PMOI / MEK Iran), has tallied reports from within Iran which puts the current death toll at over 194,400 across 478 of Iran’s cities.

Five of the worst numbers of fatalities are as follows:

Many of the reports emanating from the regime are either contradictory or downright lies. For example, a spokesperson for the Health Ministry said on Wednesday: “Currently we have 108 cities and towns in orange status and 340 are in yellow. There are no cities in red status,” and then on the same day, a spokesperson for the Mazandaran Medical Sciences University said: “The Health Ministry has announced the cities of Sari, Amol, North Savadkuh and Ramsar as red zones. Another 18 cities are in orange status and we have no cities or towns in yellow status.”

More than 194,400 people have died of the novel #coronavirus in 478 cities checkered across all of Iran's 31 provinces, according to the Iranian opposition PMOI/MEK.

Even President Hassan Rouhani, not known for his ability, to tell the truth, had to admit that things were not good in Iran. He said on Wednesday: “The path before us is not clear and nobody knows how many months it will take for the vaccine that we have started to produce to be available, and when will start the nationwide vaccination. The fact that one person says the domestic vaccine is worthless is not correct. We will listen to the Health Ministry. If the experts say foreign vaccines can be trusted, we will import them. If they say the domestic vaccine can be trusted, we will produce it.”

Reports about the reliability of a domestically produced vaccine for Covid-19 are confusing at best and, at worst, a joke. “We do have the infrastructure necessary to produce vaccines. However, we still have a long way to go,” said the national Covid-19 Task Force secretariat on Wednesday. “We are doing scientific work and it is a trial and error process. We hope the results we witnessed with animals will also be seen in humans. On the topic of mass production of the vaccine, one cannot forecast a definite date, but we are hoping to reach half-industrial production in six or seven months.”

Experts in Iran are worried about domestically produced vaccine

The situation across Mazandaran is “concerning,” according to the Director of the Mazandaran Medical Sciences University, while the deputy dean of Shiraz Medical Sciences University in Fars province said that “from the beginning of this pandemic in Fars a total of 3011 people have lost their lives, of which 1444 were in the city of Shiraz alone. Currently, we have 636 coronavirus patients hospitalized across the provincial hospitals, of which 122 are in ICUs.”

(PMOI / MEK Iran) and (NCRI): Experts in Iran are increasingly worried about the efficacy of a domestically produced vaccine.

Experts in Iran are increasingly worried about the efficacy of a domestically produced vaccine. 167 pharmacists in Iran referred to the local vaccine as “a joke.” “With what confidence do we claim to produce an indigenous vaccine,” they asked. “Why should we allow the production of such a sophisticated product to be described as so simple. When we can’t purchase a number of freezers to transfer and maintain the vaccine, we have the equipment needed to produce vaccines? And for 80 million people?” they went on to say.

The pharmacists called on the government to purchase and import an effective vaccine before it is too late. They referred to the locally produced vaccine idea as an “insult to the scientific knowledge of pharmacists and merely excuses to refrain from providing vaccines.”

Mrs. Maryam Rajavi the President-elect of the National Council of Resistance of Iran (NCRI): The regime provides no details on when and where the vaccine is purchased. Rouhani sheds crocodile tears: “We are not prepared to let our people go through the testing period of an unreliable vaccine” and the head of the Red Crescent reveals: “The purchased vaccines are Chinese.