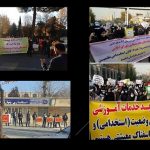 Written by Amineh Qaraee on December 17, 2020. Posted in NEWS 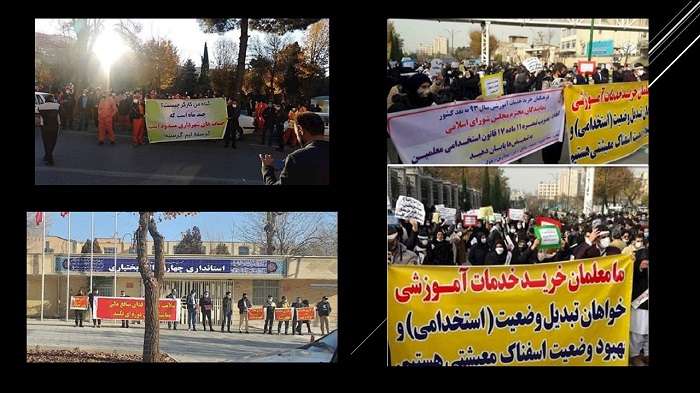 The head of Iran’s Association of Social Workers, Hasan Mousavi Chalak, warned Sunday of a potential uprising by slum dwellers when he questioned the regime’s decision to slash the budget for raising welfare indicators in the slums.

He said: “Remember where we are reducing, we are reducing the budget in areas where we have been hit from many times. The 2017 protests were by those who were concerned about their daily livelihoods. Not paying attention to this issue increases dissatisfaction and can naturally cause concerns.”

According to The  People’s Mojahedin Organization of Iran (PMOI / MEK Iran), and the National Council of Resistance of Iran (NCRI)‘s sources inside Iran, given the mass number of protests that they have seen in Iran this week, he’s not wrong.

On Sunday, (PMOI / MEK Iran) supporters from the city of Tehran reported that the teachers gathered outside the parliament to protest their undetermined employment status.

They said that 13,000 teachers from all over Iran want clarification of their employment status and are demanding that their contract be adjusted. After all, teachers in some provinces only receive about $12 per month and have only a 10-day insurance plan, even though their working hours are the same as for officially employed teachers.

Regarding a plan to hire them by the regime’s Supreme Council of the Cultural Revolution, the teachers said: “This council emphasizes that to clarify the employment status of teachers, an Article 28 employment test must be held. At the same time, the council has stated that the recruitment of teachers should only be done through Farhangian University which did not exist when we entered the education system.”

Many of the teachers have worked within the education system for many years and want the aforementioned Council to reconsider the status quo and change their employment status to improve their living conditions.

(PMOI / MEK Iran) supporters from the city of Ilam reported that the municipal workers in Ilam, western Iran, rallied outside the courthouse t protest the late payment of wages.

One placard read: “What is my Crime? We have not been paid for several months, we are hungry!”

Also on Sunday, (PMOI / MEK Iran) supporters from the city of Shahrekord reported that the residents of Shahrekord, west-central Iran, rallied outside the governor’s office to protest a seasonal exhibition that the regime is still holding during the coronavirus outbreak. They said that hosting the exhibition now will only further the spread of the virus and increase the avoidable death toll.

Protest by locals in Shahrekord

One protester said: “We are not satisfied with the way the association deals with demands of retirees. We have been waiting for the adjustment plan for several months, but we are not happy with the result.”

They further threatened to set up their own union if their demands were not met.