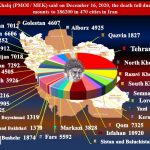 Written by Mohsen Aboutalebi on December 17, 2020. Posted in NEWS 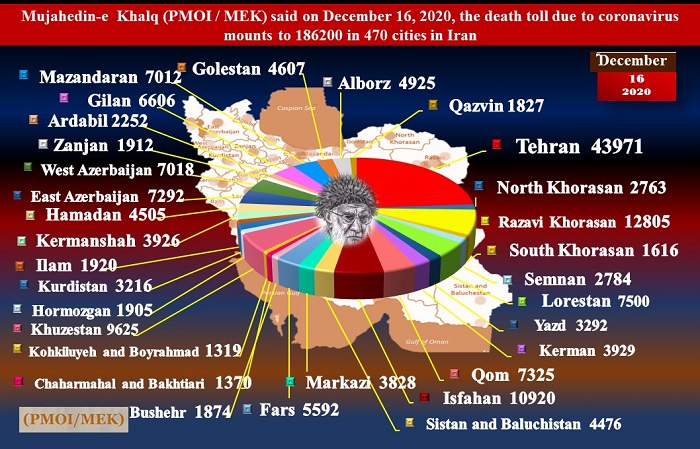 The  COVID-19 has taken the lives of over 186,200 people throughout Iran, according to the Iranian opposition (PMOI / MEK Iran) and (NCRI).

The  People’s Mojahedin Organization of Iran (PMOI / MEK Iran) and the National Council of Resistance of Iran (NCRI), reported that some 186,200 people have now died from coronavirus in Iran.

The coronavirus death toll in various provinces include:

These do not include provinces that failed to update their figures overnight and should be considered a minimum because of the Iranian regime’s secrecy. Indeed, the regime has reported just 52,883 deaths, far fewer than that of countries with better access to healthcare and welfare systems that allowed non-essential workers to stay home.

Of course, President Hassan Rouhani claimed Monday that the regime has always been “providing precise stats” and that the low death toll was the result of “adequate management”, but he then spoke of “preventing the fourth wave” and trying to buy vaccines. Those countries doing a good job had already bought vaccines and are one wave behind.

The Shahin Shahr MP put it into perspective on Tuesday when he asked the Health Minister why there are “constant contradictions in the stats, behavior, and remarks seen from the Ministry and the Covid-19 Task Force”? He noted that deaths per capita in Iran are higher than in most other countries, even if many are reported with other causes.

While Alireza Zali, head of the Tehran Covid-19 Task Force, said Tuesday that senior officials must coordinate fast to buy foreign-made vaccines because of competition from other countries.

The deputy chair of the Nursing Department in the Health Ministry cited one of the main problems in dealing with the pandemic as a lack of nurses, due to regime cuts and 45,000 of those working contracting coronavirus.

While Tehran’s governor said: “There is no hope for resilience and that the illness is depleting. The large number of people seen in the streets and the traffic has seen these days in Tehran are warning us that we may witness another peak next week.”

The increasing and unbridled trend of #Coronavirus patients and victims are the direct outcome of the inhumane and unpatriotic policies of Khamenei and Rouhani. Human lives are completely worthless in their eyes. #Iran pic.twitter.com/XfF1JKmyzW

Mrs. Maryam Rajavi the President-elect of the National Council of Resistance of Iran (NCRI): The increasing and unbridled trend of coronavirus patients and victims are the direct outcomes of the inhumane and unpatriotic policies of Khamenei and Rouhani. Human lives are completely worthless in their eyes.
MEK Iran (follow them on Twitter and Facebook)