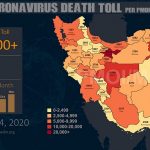 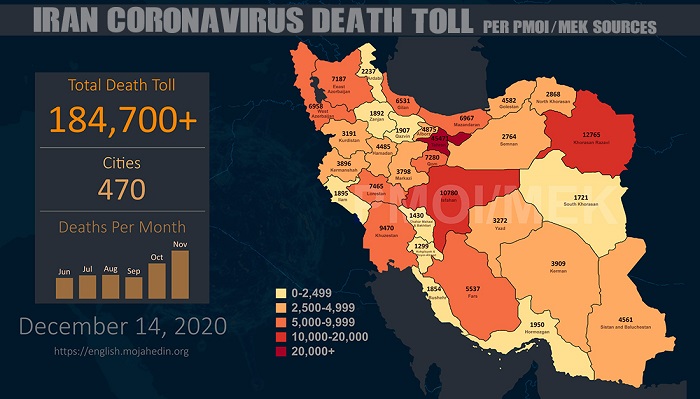 The COVID-19 has taken the lives of over 184,700 people throughout Iran, according to the Iranian opposition (PMOI / MEK Iran) and (NCRI).

the  People’s Mojahedin Organization of Iran (PMOI / MEK Iran), and the National Council of Resistance of Iran (NCRI), the main opposition to the Iranian regime, has reported that more than 184,700 people across the country have died after contracting COVID-19. The Iranian regime’s death toll, however, stands at just 52,448 – just a third of that established by the (PMOI / MEK Iran).

The Iranian regime is known for its deceptions and lies and this is precisely why the (PMOI / MEK Iran) decided to monitor the pandemic and the death toll from the very beginning.

With vaccine developments taking place around the world, some Iranian officials have spoken about the course of action to be taken in Iran. Iraj Harirchi, the deputy health minister, said at the weekend that regime officials will gladly volunteer to take the vaccine in front of cameras and that the first to get injected will be the head of the Order of Khomeini Foundation. He emphasized that if there is no trust in the vaccine, the measures will not be effective.

The situation in Tehran is growing more and more concerning and regime officials are blaming the people. Officials are saying that there is more traffic than ever in the city and that there will certainly be an increase in cases and deaths because of the Yalda celebrations which mean that there will be more family gatherings.

Other parts of the country are also experiencing a high circulation of the virus including the provinces of Mazandaran and Gilan which between them have 12 cities that are classed as “red zones”. The head of the National Coronavirus Task Force Alireza Raisi said that there is a possibility that restrictions may be put in place for the Yalda celebrations, in particular on the 19th and 20th December.

The head of the Tehran city council’s health committee said that the upcoming year is going to be a tough one, even if the pandemic comes to an end. Nahid Khodakarami pointed out that businesses have really suffered, and on a personal level, millions upon millions of families have been directly impacted by the crisis.

The education chief in Assad Abad in the province of Hamedan said that hundreds of children have not been registered to attend school because of the pandemic. Many students also lack a reliable internet connection that has caused great disruption to the continuity of their education. Furthermore, there are at least 2,100 students in the area that simply do not have the technology to attend classes online.

Many parts of the country are dealing with an increasing number of cases and this means that the health service is being put under an immense amount of strain. Since the beginning of the pandemic, medical workers have been working tirelessly to treat the sick and have made huge sacrifices. Instead of being thanked by the government, many medical workers have not been paid for months or received their benefits.

My deepest sympathies to the people of #Iran for the loss of many of our deprived compatriots in Hormozgan, Bushehr and #Khuzestan. Once again, I urge all my countrymen to join together and rush to the aid of the residents of flood-hit areas amidst the Coronavirus crisis.

Mrs. Maryam Rajavi the President-elect of the National Council of Resistance of Iran’s (NCRI): My deepest sympathies to the people of Iran for the loss of many of our deprived compatriots in Hormozgan, Bushehr, and Khuzestan. Once again, I urge all my countrymen to join together and rush to the aid of the residents of flood-hit areas amidst the Coronavirus crisis.