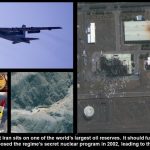 Written by Jennifer Jones-Kelley on December 11, 2020. Posted in MEK (PMOI) IN MEDIA

It should be noted that (PMOI / MEK Iran) sources have again exposed evidence that the Iranian regime concealed evidence of its illegal uranium-enrichment program during the Iran nuclear deal.

The New York Times published a report on Wednesday detailing the results of an analysis by the newspaper’s Visual Investigation team into the Iranian regime’s nuclear weapons program. The investigation revealed that the regime is constructing a new centrifuge assembly hall underground south of a previous site that was destroyed in July. The report sheds light on the speed with which the regime has undertaken construction on the new facility and the challenges that await President-elect Joseph Biden in setting his policy on Iran.

As @eu_eeas continues to appease the mullahs with promise of sanction relief under the pretext of #JCPOA, the criminal regime in #Iran takes more steps to hide its illicit nuclear weapons programme@JosepBorrellF@francediplo_EN@FCDOGovUK@GermanyDiplohttps://t.co/Yq4zTOLuV7

The Natanz centrifuge facility blew up in July in an explosion that the Iranian regime attributed to sabotage. The facility was constructed in 2012 to assemble centrifuges, which are used to enrich uranium. Uranium can be used as an energy source at low-enrichment, but at higher enrichment, it is used in nuclear weapons. The Iranian regime promised to halt their high-enrichment nuclear program under the 2015 nuclear program, but they continued to operate their nuclear sites, claiming it was for peaceful purposes.

The #Iran Regime took the final step away from the #JCPOA; it will remove limits on centrifuges, uranium enrichment, and nuclear research and development.https://t.co/i5QE0RHYSH#MEK @USAdarFarsi pic.twitter.com/33zEZ5hF4t

After the Natanz explosion, the regime vowed to build a more secure facility in a mountainside. The Times used new satellite imagery to track construction at the centrifuge site and enlisted the assistance of Jeffrey Lewis, an arms control expert at the Middlebury Institute of International Studies at Monterey in California, to interpret the results.

Mr. Lewis told the Times that the new location was more secure than the previous site. He noted, “it is located far from a road and the ridge offers significant overburden that would protect the facility from air attack.”

According to Lewis, the satellite image provides evidence that Iran is constructing a centrifuge facility at the site. “There are what appear to be two tunnel entrances on either side of a large ridge, with a pile of spoil from excavation nearby. The space between the two entrances is large enough to accommodate a facility about the same size as the centrifuge assembly building that was destroyed this summer and that Iran indicated it was rebuilt in the mountains,” he said.

Lewis also noted changes in images taken in July as evidence that new work has been done.  “The major clue is the pile of spoil from the excavation that was not present in July,” he said. “Iran also re-graded a pair of roads on each side of the ridge leading to what appear to be tunnel entrances.”

Allison Puccioni, an imagery analyst affiliated with the Center for International Security and Cooperation at Stanford University, also examined the satellite images. She pointed out that “trails of excavated earth, lighter in color than the existing hard-packed road” could be seen between the debris pile and the excavation site.

Other experts who have examined the images have called attention to the growing piles of debris near the excavation site.

According to the Times, satellite photos taken since the July explosion show new road construction and excavations. Some analysts who have examined the images believe that more tunnels are being built. This would indicate that the underground facility is even larger than previously thought.

Since the U.S. withdrew from the 2015 Iran nuclear deal, the regime has been openly enriching uranium in defiance of its participation with the other members of the deal. In November, prominent Iranian nuclear physicist Mohsen Fakhrizadeh was assassinated. In response, the regime is now threatening to further ramp up its enrichment program and bar international nuclear inspectors from the country by February if the U.S. does not remove sanctions.

It remains to be seen whether the U.S. will allow this behavior.