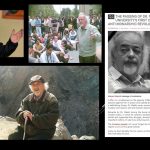 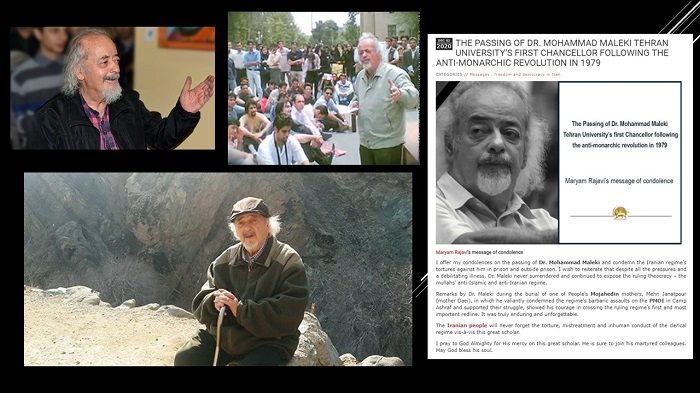 (PMOI / MEK Iran): Mrs. Maryam Rajavi, the President-elect of the National Council of the Resistance of Iran (NCRI), was the first to offer her condolences when she heard about Maleki’s death.

Dr. Mohammad Maleki, Tehran University’s very first chancellor following the 1979 anti-monarchical revolution, died on December 2nd, 2020. He became known as a prominent Iranian academic. Throughout his life, he became very popular due to his pro-democracy activities and his ongoing protesting about the theocratic and tyrannous regime that had taken over Iran.

Throughout his life, he supported the People’s Mojahedin Organization of Iran (PMOI / MEK Iran), and the National Council of Resistance of Iran (NCRI) Following the 1979 revolution and during the 1st legislative elections, he was one of the candidates standing for the (PMOI / MEK Iran). He had at one point been arrested by the security forces for Moharebeh (enmity to God).

A group of political prisoners in Evin Prison held a memorial ceremony on December 3 for Dr. Mohammad Maleki who recently passed away. pic.twitter.com/YB2nDT7QDD

“Those who are today on the other side of the border, under rockets, are standing tall as mountains. For 50 years, both the Shah and the mullahs tried to destroy them, but they failed.”

In 2016, when a student was killed at Sharif University of Technology, Dr. Maleki told students and lecturers to not be afraid and stand up and protest against the terrorist actions of the mullahs’ regime.

Mrs. Maryam Rajavi, the President-elect of the National Council of the Resistance of Iran (NCRI), was the first to offer her condolences when she heard about Maleki’s death. “He was under pressure and torture in prison for years for opposing the ruling theocracy. Following his release, he also endured pressures and restrictions,” Mrs. Rajavi said in a tweet.

Hail to Dr. Mohammad Maleki, who struggled against the mullahs' regime of #Iran for 40 years, and always supported his brave children and students in this bold and daring fight for freedom and democracy.#IranRegimeChange #WeStand4FreeIran https://t.co/goGUIN2ygo pic.twitter.com/d1mYjekwj5

Also, in a statement, more than 300 trade union, political, and civil activists commemorated Dr. Maleki and described him as “a prominent figure in the struggle against tyranny.”  “We express our condolences to the family of Dr. Maleki and to all freedom lovers,” the activists wrote in a statement published on their Telegram channel.

In a further statement on December 6th, some political prisoners in Evin Prison, Tehran’s Great Prison, Karaj Central Prison, Urmia Central prison, Qarchak Prison of Varamin, Sheyban Prison of Ahvaz, and Qom Prison rose to support Dr. Maleki’s endless struggle against the two dictatorships of the Shah and the mullahs. 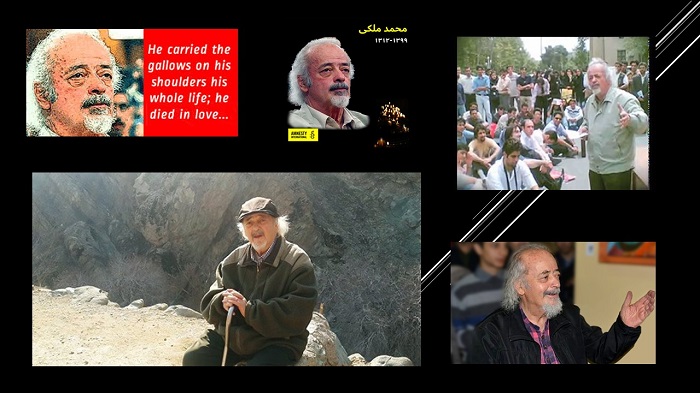 (PMOI / MEK Iran): “He was under pressure and torture in prison for years for opposing the ruling theocracy. Following his release, he also endured pressures and restrictions,” Mrs. Rajavi said in a tweet.

“He spent his life struggling against dictatorships for the freedom of Iran and Iranians. He spent many years in prison, under torture, and witnessed many executions in the 80s. He taught us to seek freedom from the cradle to the grave.”

Even as a very modest man Dr. Maleki was quick to defend political prisoners and monitored any political and freedom activists in Iran, and never wanted to become famous due to his actions. He will never be forgotten.

Treasuring (December 6), the #StudentDay in #Iran, which epitomizes the Iranian student’s cry for freedom &their protests against the dictatorships of the Shah &the mullahs. We also cherish the memory of Dr. Maleki, the freedom-loving former president of Tehran University. pic.twitter.com/DBdyM1889Y