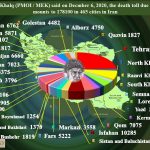 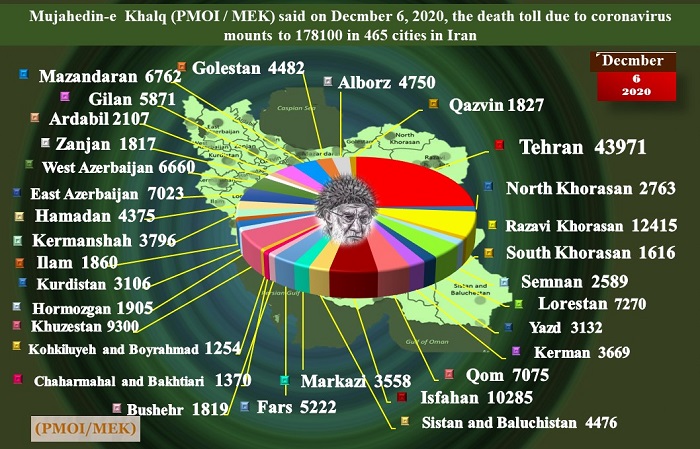 The COVID-19 has taken the lives of over 178,100 people throughout Iran, according to the Iranian opposition (PMOI / MEK Iran) and (NCRI).

The death toll from Covid-19 in Iran, the worst-hit of all Middle East countries, is rising fast with Tehran and many other cities badly hit. Over 178,100 deaths have now been reported by sources within Iran according to the People’s Mojahedin Organization of Iran (PMOI / MEK Iran), and the National Council of Resistance of Iran (NCRI), although official government figures show a far lower number of deaths at just 50,000.

More than 178,100 people have died of the novel #coronavirus in 465 cities checkered across all of Iran's 31 provinces, according to the Iranian opposition PMOI/MEK.

The Iranian President, Hassan Rouhani, after weeks of downplaying the spread of the virus, is now showing signs of panic. “Seven cities are in hyper-red and red conditions and their conditions are deteriorating. Urgent measures are needed for these seven cities,” he said on Saturday. “Tehran is considered an orange city but remarkably close to becoming a red zone. All our forces in Tehran’s orange conditions should be focused on having regulations implemented. If not, we may return to red zone status in one or two weeks.”

A spokesperson for the Health Ministry was quoted by the Mehr news agency as saying: “The recent weekly rate of new cases stands at around 17 per 100,000 people. Most of these cases are reported from the cities of Ilam, Semnan, Ardabil, Yasuj. They are significantly higher than the country’s average. The country’s average death rate is 36 per one million, most of which are reported from the provinces of Yazd, Kurdistan, Ardabil, and South Khorasan. Despite the decreasing number of red cities and a relative decrease in the number of deaths and new cases, the number of people hospitalized in some provinces such as Mazandaran, Gilan, and Golestan is on the rise. Therefore, the status quo remains fragile and sensitive.”

More than 178,100 people have died of the novel #coronavirus in 465 cities checkered across all of #Iran's 31 provinces, according to the Iranian opposition PMOI/MEK. pic.twitter.com/58RbwTi24Z

Regarding the situation in Tehran, a spokesperson for the National Covid-19 Task Force said: “The situation in Tehran may have returned to orange status but the situation is extremely fragile. It may return to red status and we may be forced to increase restrictions next week.” Mohsen Farhadi, the deputy Health Minister added that “the status quo in Tehran is fragile due to the high population and economic importance, and this fragility can change the conditions in the capital.”

Other regional Covid-19 reports are given in brief below.

The state-run mouthpiece, the daily Arman newspaper, asked whether Tehran residents could have any confidence in the lowering of Tehran’s classification from hyper-red down to orange. The daily said that the number of new daily infections hadn’t changed although the number of deaths had decreased by around 100 a day.

As our countrymen face the #Coronavirus catastrophe and flash floods, the ruling mullahs have made natural disasters 100 times more damaging with their inhuman policies. They have wasted the country’s assets on nuclear &missile projects &on export of terrorism & warmongering.

Mrs. Maryam Rajavi the President-elect of the National Council of Resistance of Iran (NCRI): As our countrymen face the Coronavirus catastrophe and flash floods, the ruling mullahs have made natural disasters 100 times more damaging with their inhuman policies. They have wasted the country’s assets on nuclear and missile projects and on the export of terrorism and warmongering.