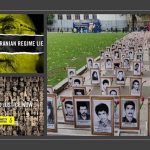 What these agents are saying is that Amnesty International cannot be forgiven for identifying the political martyrs of the 1988 massacre 90% of whom were members and supporters of the (PMOI / MEK Iran).

Any attack on Amnesty International is seen as an insult to the justice movement and will only be of use to anybody who was involved in ordering the 1988 massacre.

It has been more than 30 years since the 1988 massacre of political prisoners in Iran and it has taken until today for Amnesty International to expose the finer details of this crime against humanity. This crime was condemned by the former designated heir to Khomeini when the perpetrators were called criminals.

Statement of Support for @amnesty by Former Political Prisoners Who Witnessed the #1988massacre in #Iran
An attack on Amnesty International is an assault on the Justice Movement and can only serve the interests of those who ordered the massacrehttps://t.co/pO0eBf48Qq

Up to now the international community many countries of which claim to support human rights have remained silent and done nothing to condemn this human rights injustice. Through fear, they have not only kept silent but have appeased Iran. It is only due to the efforts of families of the massacre’s victims and the 32-years of activities of the Iranian Resistance, and especially Mrs. Maryam Rajavi, the President-elect of the National Council of Resistance of Iran (NCRI) ongoing call for justice that now a condemnation of this terrorist act is being realized by organizations like Amnesty International whose report is titled “Blood-soaked secrets: Why Iran’s 1988 prison massacres are ongoing crimes against humanity.”

This is an important step for fast-tracking the justice movement and making the regime’s officials accountable for committing this terrible crime.  When these revelations were made public, the clerical regime’s sleeper cells, political allies, and agents, including the infiltrator and intelligence agent, Iraj Mesdaghi, are now waging an attack on the Amnesty International report.

#MEK #Iran What has also concerned Mrs. Rajavi is the lack of international investigation into the regime’s crimes, such as those in the November 2019 protests and the 1988 massacre of 30,000 political prisoners. #WeStand4FreeIran pic.twitter.com/xnBrxaslm2

What these agents are saying is that Amnesty International cannot be forgiven for identifying the political martyrs of the 1988 massacre 90% of whom were members and supporters of the People’s Mojahedin Organization of Iran (PMOI / MEK Iran).  But these martyrs are the same ones who sacrificed themselves for the Iranian people’s freedom when they chanted the slogans ‘’Death to Khomeini, Hail Rajavi.’’ They were executed because of these words they spoke. Secondly, the regime’s agents are complaining because they want to know, why Mir Hossein Mossouavi, Khomeini’s prime minister at the time of the massacre has had his name made public as one of those responsible for serving the actions of the regime at that time.

The former political prisoners who were present to witness the 1988 massacre and are the People’s Mojahedin Organization of Iran (PMOI / MEK Iran), members and supporters, have promised to the 30,000  martyrs who lost their lives that they will not stop in making every effort possible to name those who were responsible for the 1988 massacre and ensure the perpetrators get the justice they deserve.

What has also concerned Mrs. Rajavi is the lack of international investigation into the regime’s crimes, such as those in the November 2019 protests and the 1988 massacre of 30,000 political prisoners. #WeStand4FreeIran https://t.co/TnppuPMMNo

The statement goes onto say that Amnesty International can depend on the support from political prisoners, families of the martyrs, and all the Iranian people as it strives to expose the truth regarding this awful crime against humanity. The regime’s leaders need to come face to face with the fact that 40 years of crime and murder up to the November 2019 massacre including the executions of Mostafa Salehi and Navid Afkari will be pursued until justice is delivered and the perpetrators are punished for their evil actions.

The former political prisoners stress that insulting and attacking Amnesty International and its researchers and reporters are unacceptable. As stated in the statement issued by 1,404 political prisoners, “We consider it to be the urgent obligation of all political prisoners and any dignified human being to expose anyone, whether a former prisoner or otherwise, with any political claim, who serves the interests of the clerical regime, and we condemn any silence with respect to such abhorrent actions.”

Iranians are resisting the #Iranian regime’s attempt to repress them after the emotional executions of two political prisoners, Navid Afkari and Mostafa Salehi. Family members, friends, and others who knew them have gathered at Navid Afkari’s graveside in his memory. #MEK #Iran pic.twitter.com/WvqwUcUHMk