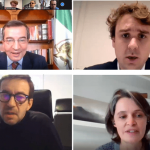 Maryam Rajavi calls for justice ahead of the trial of Assadollah Assadi, Senior Iranian diplomat and terrorist conspirator

Written by Mohsen Aboutalebi on November 26, 2020. Posted in MEK (PMOI) IN MEDIA

The press conference held on the morning of the 26 November in Brussels, Belgium, providing details of the historical trial of an in-office Iranian regime diplomat-terrorist.

A landmark press conference was held on the morning of the 26 November in Brussels, Belgium. The Belgian lawyers representing the 25 civil parties in the terrorism case against Assadollah Assadi, a senior Iranian regime diplomat and Station Chief for the Ministry of Intelligence and Security, Rik Vanrusel and Christophe Marchand, recounted the details of the thwarted terrorist attack Assadi had planned to bomb the annual Free Iran Gathering, held annually on 30 June 2018 near Paris.

The event is attended each year by around 100,000 supporters of the Iranian resistance movement; the People’s Mujahedin of Iran (MEK/PMOI) and the National Council of Iranian Resistance. This includes dissidents from across the globe, includes hundreds of dignitaries, such as lawmakers from Europe, the United States, and Africa. The President-elect of the NCRI, Mrs. Maryam Rajavi, was the target of the planned bomb attack at the gathering.

In a statement in advance of the court proceedings, Mrs. Maryam Rajavi, highlighted, “Today, far beyond just this particular court, the entirety of the regime is being prosecuted before the world’s conscience, especially the people of Europe. The European Union and member states whose territories have become the roaming grounds for terrorism by the religious fascism ruling Iran are being judged by the court of public opinion to end the policy of silence vis-à-vis the regime’s terrorism and adopt a decisive policy towards Iran’s medieval regime. The Iranian regime’s leaders must be prosecuted and face justice. This is an imperative and deterrent step to counter the godfather of international terrorism in our time.”

The Iranian diplomat was a man called Assadollah Assadi, who was the third secretary at the Iranian Embassy in Vienna. Two of the other accomplices were a Belgian-Iranian couple and there was one other whose identity is yet to be revealed.#MEK Iran #WeStand4FreeIran pic.twitter.com/qRWF3Nv8nF

Tomorrow, on 27 November 2020, Assadi and three of his accomplices, Amir Saadouni, his wife Nasimeh Naami, and Mehrdad Arefani, will all face trial on the charges of attempting terrorist murder and for participating in a terrorist group. This is a monumental case, as it is the first time that a senior Iranian diplomat will go on trial in a European country, acting on behalf of the regime.

This case will expose the nature of the Iranian regime’s determination to assert control over Europe, and the Iranian Resistance movement based there, by committing acts of terrorism. The legal documents compiled from two years of investigation by Belgium’s intelligence and security agency (VSSE), state that Assadi plotted the terrorist attack under the orders and ultimate authority of the Iranian regime. He brought the explosives to Europe himself. The agency asserted in a note to Belgium’s federal prosecutor, “the planned attack was conceived in the name of Iran and its instigation.”

Mr. Vanrusel further supported the argument: “The brazen terrorist plot was not directed against 25 civil parties and tens of thousands of participants in the gathering, alone, but against European and Western civilization and values,” said Mr. Vanrusel.

The four suspects face between five and twenty years in prison on charges of “attempted terrorist murder and participation in the activities of a terrorist group” should they be found guilty. Furthermore, a guilty sentence, in this case, would affirm that the international community will not abide by the violent and immoral tactics of the regime and that European governments will no longer allow the regime to act with impunity.