Written by Esmail Mohades on November 26, 2020. Posted in MEK (PMOI) IN MEDIA 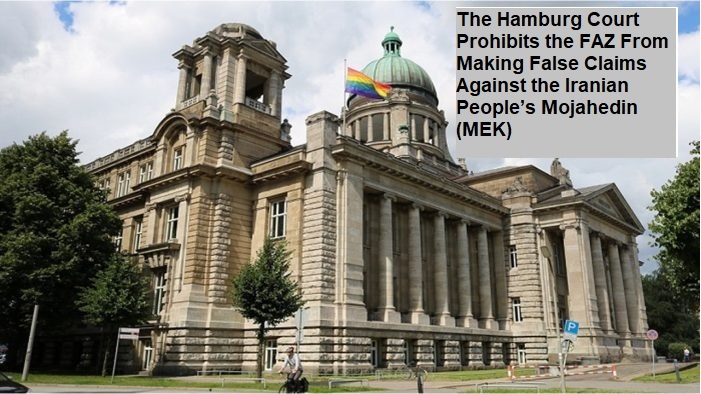 The Court in Hamburg for the 2nd time rejects the FAZ publication a demonization piece, against MEK the main Iranian opposition, confirming the role of Iran’s Ministry of Intelligence and Security in spreading lies about human rights abuse inside the organization.

The Frankfurter Allgemeine Zeitung (FAZ), a leading German newspaper, agreed with the 2nd ruling in a German court that demanded any defaming of the People’s Mojahedin Organization of Iran (PMOI/MEK) be banned.

The Iranian regime has used vast amounts of the country’s wealth which is owned by the people to try to spread disinformation about the MEK. There is little doubt as the regime flounders amidst crises in Iran that this German court ruling will do little to stop the misinformation campaigns, but at least it is a start.

Fortunately, the MEK had Prof. Dr. Gero Himmelsbach, a well-known press lawyer, to represent them in the court case. He said that it was back in March 2019 when the Hamburg district court placed a ban on Der Spiegel reporting that torture was taking place in the MEK’s camp in Albania. Der Spiegel, it appears didn’t use the most reliable sources for the defamatory information but had depended on accounts released by what was called ‘MEK defectors’. In the end this didn’t matter as Der Spiegel didn’t question the court decision at the time.

A Hamburg Court Rules Against @DerSpiegel in Blow to Regime’s Misinformation Campaign against the main opposition(#MEK) to #Iran's dictatorship https://t.co/zyhK7VuIzz #Spiegel_FakeNews #Spiegel #FreeIran

The FAZ thought it would follow on from Der Spiegel’s reports, despite the newspaper being reprimanded in court, but that was more than a year later on May 13, 2020. It too used so-called ‘defectors,’ who claimed torture took place by the MEK in Albania. The Hamburg Regional Court acted in the same way to FAZ as to Der Spiegel banning the publication of unfounded allegations about the activities of the MEK in their Albanian residence. The FAZ decided to oppose the ban so it lodged an appeal requesting that there be an oral hearing in Hamburg. This failed as the MEK submitted affidavits that the alleged torture in the Albanian camp was a lie. The hearing also found that the so called informants for the two newspapers were ‘’controlled by the Iranian Secret Service, the MOIS.”

The popular uprisings that have been taking place in the last two years in Iran have basically frightened the regime so they are devising any ways they can to depopularize the resistance movement, the MEK. Because they have been unsuccessful at home they have been waging terrorist actions in Europe including the failed bomb attempt at a 2018 assembly of the MEK and its supporters just outside Paris in 2018. This led to the arrest of the regime’s “diplomat-terrorist,” Assadollah Assadi, who is facing a trial this week.

In recent years the international community has been appeasing Iran by taking little notice of its treatment of any opposition movements. However, these recent decisions in the German court have revealed that the opposition movement is a viable alternative and cannot be easily crushed and that the regime had deliberately set up its own people to peddle disinformation to popular German news media outlets. Its hope was that the Iranian people would no longer support the resistance but would stick with the old, anti-democratic regime.