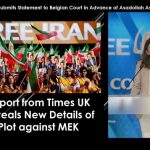 Written by Jennifer Jones-Kelley on November 24, 2020. Posted in NEWS 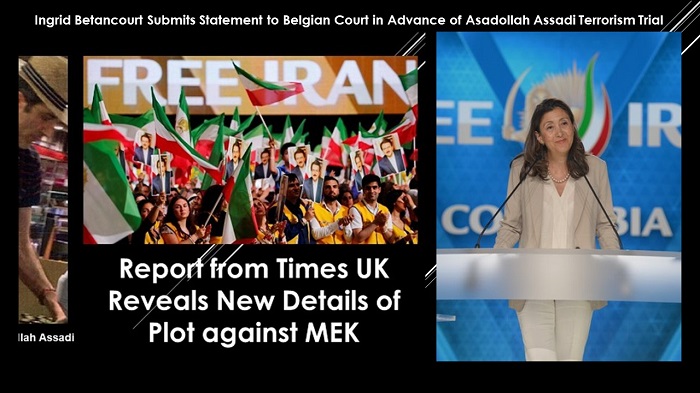 Iranian diplomat/terrorist Assadollah Assadi and his three accomplices are set to stand trial later this month in Antwerp on terrorism charges stemming from the foiled terrorist bombing plot at the 2018 Free Iran gathering in Villepinte, France.

French-Colombian politician Ingrid Betancourt is a longtime supporter of the People’s Mojahedin Organization of Iran (PMOI / MEK Iran) and National Council of Resistance of Iran (NCRI) and was present at the 2018 Free Iran gathering, along with dozens of other prominent politicians and dignitaries from around the world and tens of thousands of MEK supporters.

Ingrid Betancourt: We are with the women of #Iran in every step, in every heartbeat
Prominent #women addressed the #FreeIran2018 grand gathering of Iranians in Paris on June 30, 2018.https://t.co/dfMXaG372t pic.twitter.com/cDeejVYCDp

Ms. Betancourt submitted a statement to the court in advance of Assadi’s trial condemning the terrorist plot that, if successful, would have caused mass casualties, according to investigators. Ms. Betancourt offers a unique perspective on the foiled bombing because of the six years she spent as a hostage to FARC rebels in Colombia. The Free Iran gathering was her second close encounter with death. Portions of her statement are included below:

“When I went to the rally on June 30, 2018, to defend the Iranian people’s freedom, I did so in solidarity with those who are experiencing human rights violations like the ones I have endured. In previous years, at the same annual gathering, my mother, my daughter, and my niece have accompanied me, always in the process of commitment and solidarity. The thought that I might be in danger by going there didn’t cross my mind, nor those who were with me that day.”

“Humans tend to imagine that in the event of such a disaster, they will be spared and, miraculously, will be among the survivors. It is a luxury that I can no longer afford. My life experience has made me realize that horror touches us all blindly.”

“When I learned that a plot had been foiled, I stayed prostrate for several days at home, refusing to tell my people about it, under the grip of a deep unease exacerbated by the feeling of déjà vu. I came to escape it beautifully, again!”

“This criminal act reveals how much we need exemplary justice to guarantee that we will be able to remain free at home, that our children will have the right to say what they think without worrying about displeasing anyone, that our values, which are the base of our dignity will not be violated, even if the boots of those who claim to crush them frighten and intimidate us, and even if the power of those who attack us can corrupt the conscience, muzzle them, or even eliminate them.”

By defending the rights of the potential victims of this thwarted terrorist action, it is the whole of humanity that demands that our justice act against the violence of terror, that which interferes in all corners of the planet and marks our time of his black imprint. From the attack on the New York Twin Towers by Al-Qaeda to the live beheadings of the desert by Daesh and the ram truck attack in Nice to the recent knife attacks in the UK, terrorism has become the evil of the century. Silent violence, the worst of all because in addition to being dehumanizing, blind, cold, cruel, it is also ready to play with everything and everyone, even going so far as to invoke God to justify itself.”

“I could focus on the damning facts: the use of diplomatic cover to act with impunity and across Europe; the recruitment of our nationals of Iranian origin, holders of European passports, as agents under the orders of a foreign power; the premeditation of the massacre with unlimited economic capacity and years of elaborate upstream work to gather information, infiltrate, and plan the crime in all detail and with all calculations of space and time; the instrumentalization of the rules of the Schengen area in favor of the murderous plan; the deployment of an international strategy from the offices of Iranian ministers, etc.”

"Maryam Rajavi's determination has brought this 1,000 Ashrafs to life inside Iran."
Ingrid Betancourt at the 2018 Free Iran convention in Paris#Iran#InternationalWomensDaypic.twitter.com/PInAgeL2Yu

“I could also insist on the goal: to succeed in an attack on European territory, the spectacularity, and size of which – the intention being to inflict a maximum number of human losses – would have a double effect:

“But it is neither the overwhelming evidence nor the devastation sought by the attack that I would like to focus on, but the fact that we are still alive to demand justice. I am referring to what allows us to overcome murderous madness, not to submit, to prevail in the face of ignominy.”

“If we are all still alive, despite the skill and experience of these international crime professionals whom you have the task of judging, it is thanks to anonymous men and women, of Belgian, German, and French nationality, who were responsible for ensuring the safety of women and men in their country. They are the ones who gathered and analyzed scattered information, who decoded and understood what was being concocted, and who acted intelligently to thwart the plot and put in your hands the people who were going to kill us.”

“By following and confronting the terrorists, these men and women had everything to lose to ensure that justice was done. Especially their lives. Their hard work, the decisions they took, their way of acting, their lucidity, the team spirit they demonstrated could only be significant because, being European, they shared collective memory, a shared history, the same values, a similar way of being in the world.”

“If we are alive, then it is not a coincidence, but the result of a common conscience that believes that justice is more effective than violence. This culture that has preserved us, that of ‘law’ in the broad sense, also explains in large part why persecuted women and men around the world seek refuge in the territory of Europe, as the Iranian Resistance did.”

“This moment is, therefore, more than anything else, a real profession of faith in the beneficial work within human reach. Or, to put it another way, the opportunity to turn death drives into the foundations of life.”