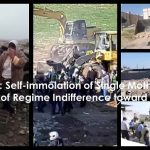 Written by Amineh Qaraee on November 23, 2020. Posted in NEWS 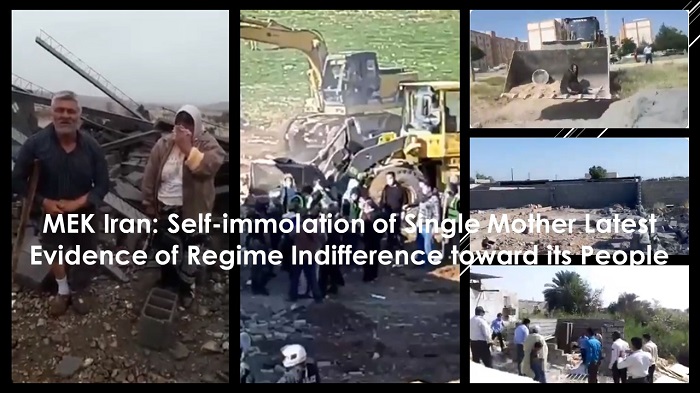 Raisi, who is best known for his role as a Death Commissioner during the 1988 Massacre of 30,000 the People’s Mojahedin Organization of Iran (PMOI / MEK Iran) political prisoners, has made statements of sympathy.

Bandar Abbas was the site of another tragedy on Wednesday when the Iranian regime’s cruel policies led a poor, single mother to self-immolate.

The unemployed mother was living with her children in a house she had cobbled together herself on the outskirts of the southern city when security agents raided her home and forced her and her children out. The agents told the woman that she had not obtained a government permit for the home and destroyed it. Faced with homelessness, poverty, and no support from her government, the woman took the desperate measure of self-immolation. Bystanders filmed the event and posted videos to social video, triggering widespread public outrage.

Near Bandar Abbas, southern #Iran
Authorities demolished the make-shift home of a poor woman as her daughter begs them to stop.
Reports indicate the woman committed suicide afterwards by setting herself ablaze.#41YearsOfMiserypic.twitter.com/sSW54RdRlt

Regime Judiciary Chief Ebrahim Raisi was forced to respond to the incident, which many have cited as part of a pattern of brutality by regime forces. Raisi distanced himself from the security force’s actions and called on the prosecutor in Hormozgan Province to investigate the incident. Other regime officials and institutions followed Raisi’s lead, assigning blame to the mayor of Bandar Abbas, rogue police officers, and other low-level functionaries.

Fereydoun Hemati, the provincial governor of Hormozgan called out the security agents for “damaging the reputation of the municipality” and “disrupting public opinion.” He failed to mention the death of the single mother or her orphaned children in his remarks. Bandar Abbas’s prosecutor says he has put together a dossier of information about the incident.

Raisi, who is best known for his role as a Death Commissioner during the 1988 Massacre of 30,000 the People’s Mojahedin Organization of Iran (PMOI / MEK Iran) political prisoners, has made statements of sympathy.

Ebrahim Raisi, a Judiciary chief, who was appointed by the regime’s first Supreme Leader, Ruhollah Khomeini, with the task of orchestrating the massacre of over 30,000 political prisoners in 1988, majority of the members of #MEK #Iran https://t.co/PcHDGUqkdv pic.twitter.com/RO4am7iFix

This is not the first time Raisi has made such statements after a brutal attack on an Iranian citizen was made public. Earlier this year, an almost identical scene played out in Kermanshah when security forces destroyed the home of Asieh Panehi. In this case, the 58-year-old woman was killed in the raid. When the incident became public, the judiciary denied any role in the attack and promised to investigate.

Yet another incident occurred in October when a group of young people was dragged into the streets and beaten in public. When videos of the incident were made public via social media, Raisi was once again forced to respond to the outraged public. He promised to investigate the incident and announced new reforms in the judiciary. These reforms—like the promised investigations in other cases—have never materialized.

This is yet another episode of the impasse the Iranian regime is at. Iran’s society is on the verge of explosion, another nationwide uprising. This leaves the regime in a very complicated position: On the one hand, it needs to create an aura of fear and control, to suppress the people, to show zero tolerance, and to exude power. But on the other hand, it fears that taking things too far will spark another round of protests, which this time will go even beyond the nationwide uprising of 2019.

Raisi claims that the judiciary is not responsible for the repeated acts of brutality against the Iranian people, but the fact that the incidents continue to occur is evidence that the judiciary is culpable. Since Raisi was appointed as Judiciary Chief, he has cracked down on protesters and political dissent, and under his leadership, the judiciary has handed down heavy sentences for even minor offenses. Protesters have been sentenced to death with alarming frequency as a deterrent to a future uprising.

Raisi personally sent thousands of MEK political prisoners to their deaths during the 1988 Massacre and has never shown remorse for his actions. He has justified his role in the mass executions and vowed to eliminate the resistance group.

When videos of the regime’s cruelty to a single person are made public, officials deny responsibility and feign sympathy. They make false promises to quell the outrage, but nothing changes. Meanwhile, Raisi and other regime leaders continue their campaign of suppression to maintain their grip on power.

A single mother and her children were forced out of their home this week and made to watch as it was demolished. This mother then set herself on fire out of desperation. Raisi’s promises are empty. The only way to stop this pattern is to free Iran.