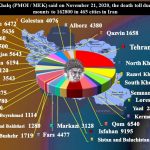 Written by Esmail Mohades on November 22, 2020. Posted in NEWS 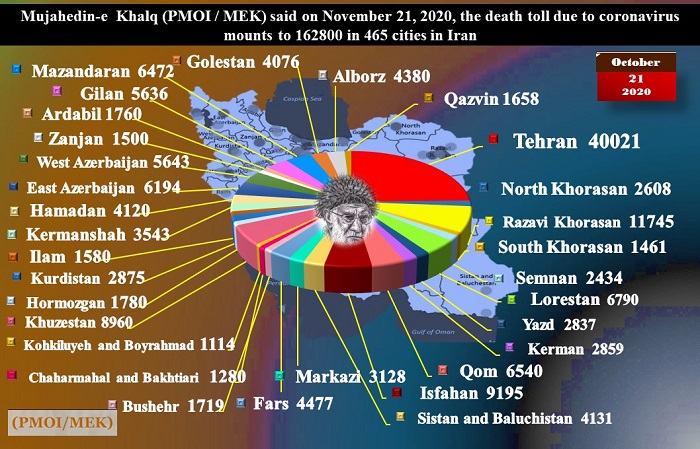 The COVID-19 has taken the lives of over 162,800 people throughout Iran, according to the Iranian opposition (PMOI / MEK Iran).

According to the People’s Mojahedin Organization of Iran (PMOI / MEK Iran), and the National Council of Resistance of Iran (NCRI)., over 162,800 people have now died from Covid-19 in Iran. The regime’s figures are far fewer as usual at just over 44,327.

The death toll is highest in large cities like Tehran where 40,021 people have now died. Even small towns and cities have high death tolls, though.

More than 162,800 people have died of the novel #coronavirus in 465 cities checkered across all of #Iran's 31 provinces, according to the Iranian opposition PMOI/MEK. pic.twitter.com/F5T1pfIBVd

The Deputy Health Minister, in a somber interview on state TV, said: “We are not making decisions between good and better. We are not even making decisions between good and bad, or bad and worse. Our decisions are based on the options of the worse and the worst. The continuation of the status quo and the policy of kicking the can down the road and appeasement that some call for will lead to a prolonging of this epidemic, and a lengthening of its economic impacts with even more severity. There is no single short-term solution.”

The former president of Iran, Mahmoud Ahmadinejad, was forthright in his criticism of the regime he was once president of when he said that the government was “not helping the people at all.” “They are just constantly terrifying everyone and blaming everything on the people. In the beginning, for over a month they said Covid-19 has not entered the country! Suddenly, they come and say all stores must be closed at 6 pm! There is no management seen at the policy-making level and among directors.

Our medical professionals are sacrificing their lives. You are not providing any solutions and if anyone does provide a solution you shun them! They say people themselves should make ends meet while staying at home! A part of the government is seeking its own political objectives! The medicine that you yourselves say has no effect is now being tested on the Iranian people?! They talk as if we have succumbed to this virus as if nothing can be done! And they constantly say do not leave your homes! If we are not to do anything, what do we need you for?!” he added.

More than 162,800 people have died of the novel #coronavirus in 465 cities checkered across all of Iran's 31 provinces, according to the Iranian opposition PMOI/MEK.

The West Azerbaijan Medical Sciences University public relations officer said in a statement to the IRNA news agency: “During the past 24 hours we have witnessed 37 coronavirus deaths. Furthermore, 16 people who died yesterday in various cities of West Azerbaijan province tested positive for Covid-19. With these 53 new deaths, the total number of deaths in our province has reached 2529. Currently, the number of people hospitalized in our province has reached 1,574, of which 305 are in ICUs and 88 are under ventilators.”

The ISNA news agency reported that the Fars Province Medical Sciences University deputy dean said that there had been 2,065 deaths from Covid-19 so far in Fars Province. Most of the counties in Fars are now coded red. Most alarming is the number of patients in the hospital at 2,353, of which 361 are in ICU.

Other provincial reports in brief are:

Mrs. Maryam Rajavi the President-elect of the National Council of Resistance of Iran’s (NCRI): The mullahs ruling Iran facilitated the spread of coronavirus and did not make any serious efforts to contain it. This is why the pandemic has turned into a source for hidden escalation of fury and anger.

The mullahs ruling Iran facilitated the spread of #Coronavirus and did not make any serious efforts to contain it. This is why the pandemic has turned into a source for hidden escalation of fury and anger.#Iran pic.twitter.com/LQ3FysnR4t