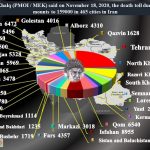 Written by Mohsen Aboutalebi on November 19, 2020. Posted in NEWS 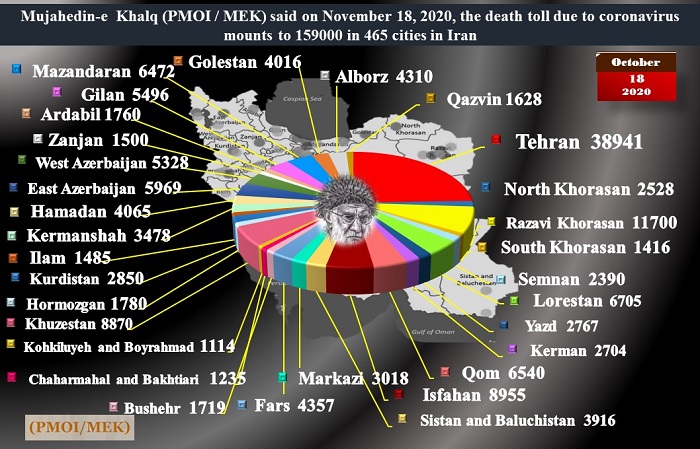 The People’s Mojahedin Organization of Iran (PMOI / MEK Iran) announced, that the number of Coronavirus death toll in 465 cities exceeded 159,000.

The People’s Mojahedin Organization of Iran (PMOI / MEK Iran) and the National Council of Resistance of Iran (NCRI) announced Wednesday that more than 159,000 people have died from coronavirus in Iran with the provincial death tolls being reported.

More than 159,000 people have died of the novel #coronavirus in 465 cities checkered across all of Iran's 31 provinces, according to the Iranian opposition PMOI/MEK.

This is in addition to the reports from other provinces that did not update their totals overnight and should be considered a minimum due to the secrecy of the regime, who report ‘only’ 42,941 deaths.

Of course, not all regime officials are sticking to the story.

Health Minister Saeid Namaki warned Tuesday that if the country drops its guard, they will start seeing “four-digit daily death stats” from Saturday.

He said: “Neglect during this period means defeat, meaning if anyone violates the rules, we must not show mercy. Every individual can be considered a virus bomb because today the virus can spread to ten different people and the illness has become a family issue.”

Meanwhile, the dean of Isfahan Medical Sciences University said that the province has seen an increased 50% more coronavirus cases since September with 354 deaths in one week alone.

On Monday, the dean of Ardabil Medical Sciences University said that the province had seen a “record 19 deaths” in one day.

While Interior Minister Abdolreza Rahmani Fazli warned Sunday that the country is no longer choosing between good or bad, but bad and worse because the country is currently “major cost in human lives and economic and social losses”.

The spokesperson of the Majlis Judicial Commission said that Covid-19 decisions are unfortunately made “spontaneously” and based on “opinions”, with the parliament, cabinet, and all other government branches making their own decisions.

Over 159,000 people have died of the novel #coronavirus in 465 cities checkered across all of #Iran’s 31 provinces, according to reports tallied by the Iranian opposition PMOI/MEK as of Wednesday afternoon local time, November 18.https://t.co/49jEyccWQm

They said: “It is very unfortunate the [Parliament] Presidium is so passive in this regard. I issued notes many times to the National Covid-19 Task Force needs to provide a report. Was that one [billion] euro received or not, how are economic issues to be resolved.”

Mrs. Maryam Rajavi the President-elect of the National Council of Resistance of Iran’s (NCRI): The mullahs ruling Iran facilitated the spread of coronavirus and did not make any serious efforts to contain it. This is why the pandemic has turned into a source for hidden escalation of fury and anger.