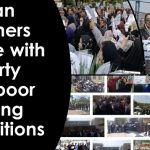 Written by Esmail Mohades on November 17, 2020. Posted in NEWS 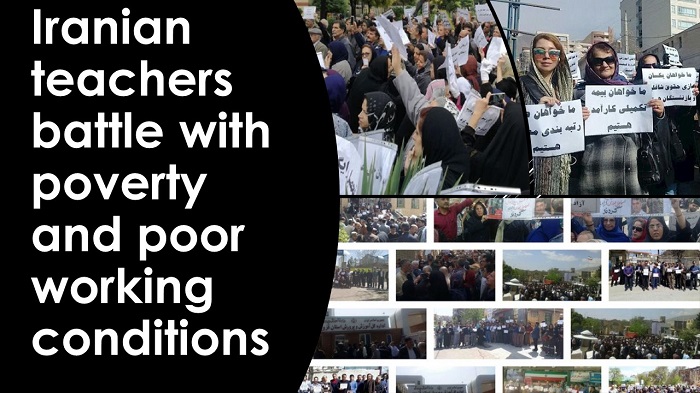 Teachers across Iran have been drawing attention to their poor working conditions and low salaries for years. There have been many rallies and protests, yet their situation has not changed.

The National Council of Resistance of Iran’s (NCRI), and the People’s Mojahedin Organization of Iran (PMOI / MEK Iran) reported that many teachers across the country are finding it very difficult to make ends meet and their dignity is suffering. Their future is uncertain and they have no job stability, yet they are expected to take charge of educating the next generation of Iranians. In order to be able to survive, many teachers across the country have to take second jobs.

In #Iran under mullahs’ the living conditions for teachers, over 50% of them women, is far -standards. Instead of providing a good education, teachers are preoccupied by making their ends meet#worldteachersday2019 pic.twitter.com/GWaWOW97Vh

MEK reported on May 2, 2020, many teachers – whether they are part-time, retired, or on formal contracts – have been participating in protest rallies in order to draw the government’s attention to their cause. They are not asking for much – they just want to be paid their wages on time, as well as any benefits they are owed and pensions.

Some of the stories are shocking, such as the teachers that have to sign a contract upon employment declaring that they have received their salaries in full. There are teachers with years, and even decades, of experience, yet they are not given permanent contracts. This is so that they can be paid less.

And with the current Coronavirus health crisis, teachers are being put at risk. The Director of the Department of Education in Sabzevar said that around 15,000 education workers in the city have contracted COVID-19. Yet despite these astounding figures in one city alone, teachers and other education workers are not given any medical or health benefits. Over 156,700 people have died of the coronavirus in Iran, according to reports by the (NCRI) and (PMOI / MEK Iran).

#Iran
Head of Infectious Diseases Department of Masih Daneshvari Hospital: Students should avoid attending schools, we do not have beds for children #COVID19 pic.twitter.com/0yVKHokyIR

Even the most educated of teachers with Master-level degrees are on very low wages. A member of the regime’s Parliament (Majlis) spoke about teacher’s salaries, indicating that those with high-level qualifications only earn around five million rials per month – around $18. Some are earning as little as two million rials a month, or $7.75, according to the state-run Hamshahri publication.

Those on full-time contracts may get around 30 million rials per month or $1,200 per year. Although this is much more than those on part-time contracts, it is still far below the country’s official poverty line. Three times below it, to be precise.

The attitude towards teachers in Iran, on the part of the government, is shocking. The Minister of Education said just a few weeks ago that teachers in Iran accepting their salaries and having signed a contract should have nothing to complain about. Basically, they are told to take their salary or find another job. He even shirked responsibility with regards to the delayed wages.

Maryam Arbabi, an Iranian elementary school teacher from North Khorasan province, lost her life to the #coronavirus. Concerned about her students, she decided to continue teaching from the hospital bed until the end. https://t.co/NAiB1E7PMo #Iran pic.twitter.com/JGqK5QhTfP

MEK network from different parts of the country reports that teachers have been speaking out about the situation and will continue to do so. During rallies and protests, they make it clear that they are fighting for legitimate rights – dignity and a decent standard of life.

Teachers across the world are valued by their governments. In certain countries in the West, they may be paid modestly, but they are certainly not forced to live three times under the poverty line. Teachers will have grievances everywhere because of standards and regulations, but not to the same extent in Iran.

Mrs. Maryam Rajavi the President-elect of the National Council of Resistance of Iran’s (NCRI): Teachers’ protests and their stand against repressive regime forces showed public anger and disgust at religious dictatorship and demand for change; “People join us, our problem is your problem”, “Teachers are imprisoned, extortionists are free”
MEK Iran (follow them on Twitter and Facebook)