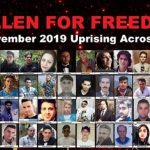 Written by Mohsen Aboutalebi on November 15, 2020. Posted in NEWS

(PMOI / MEK Iran): Fallen for Freedom in November 2019 Uprising Across Iran. The IRGC retaliated by opening fire on protesters, killing more than 1,500

It has been just 12 months since the November 2019 uprising which was spurred on by unreasonable price hikes in gasoline. In the January 2018 uprising, the regime’s Supreme Leader, Ali Khamenei, said the People’s Mojahedin Organization of Iran (PMOI / MEK Iran) had been a major driving force behind the unrest that caused both uprisings.

What the mullahs did to repress the unrest was to kill and arrest those involved as a warning to anyone else who may choose to follow. However, it is rare for these types of crackdowns to be successful as the flame of unrest is still burning, waiting to unleash itself.

In November 2019 the mullahs’ regime announced more austerity measures against the Iranian People, the (PMOI / MEK Iran) mobilized resistance units for a nationwide uprising which spread to 191 cities throughout the country. The IRGC retaliated by opening fire on protesters, killing more than 1,500.

(PMOI / MEK Iran) announced that at least 1500 have been killed during Iran protests; however Iranian regime avoids releasing any figures

Many within the international community blame the appeasement of Iran as the reason for crackdowns to keep down the people. Also, this appeasement hasn’t stopped plots in Albania to destroy the (PMOI / MEK Iran), the main exiled opposition group. In June 2018 two agents were caught trying to travel from Belgium to France while possessing 500 grams of high-explosives. They were going to bomb the international gathering near Paris organized by the National Council of Resistance of Iran (NCRI). Having been unable to stop unrest in the country the regime decided attacking the (PMOI / MEK Iran) would be more productive.

Recently at the NCRI conference in separate speeches, European lawmakers and Iranian activists recommended policies that included the expansion of human rights, designating the Revolutionary Guards as terrorists, and closing the embassies and “cultural institutions” where notorious terrorists like Assadollah Assadi operate on behalf of the Iranian regime globally. Without these measures, global security will get worse and the Iranian people will face even more political violence in response to further uprisings.

The January 2018 uprising was caused by decades of dissent but the November 2019 uprising was evidence that those efforts would not easily be disrupted. It also showed that the regime’s propaganda against the Resistance movement (NCRI) and (PMOI / MEK Iran), was not real. The Iranian Resistance, (NCRI) and (PMOI / MEK Iran), now have more power and organizational strength ever since Tehran failed to stamp it out through a series of mass executions in the 1980s. And despite the effects of even more crackdowns today, it is poised to guide the Iranian people toward a democratic revolution, with or without any help from the West.

Mrs. Rajavi stressed on Tuesday conference that the Iranian Resistance, (NCRI) and (PMOI / MEK Iran), expects Iran’s future to be determined only by the Iranian people, particularly the young generation that has grown up in the shadow of the regime’s abuses, but with a clear view of modern democratic societies.

The European nations have a clear role to play in deciding how much more young Iranians are prepared to suffer for their cause. It is now the right time for European countries to stop appeasement and support the Iranian people’s right to resistance and eliminating the mullahs’ regime.