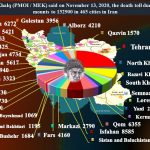 Written by Mohsen Aboutalebi on November 14, 2020. Posted in NEWS 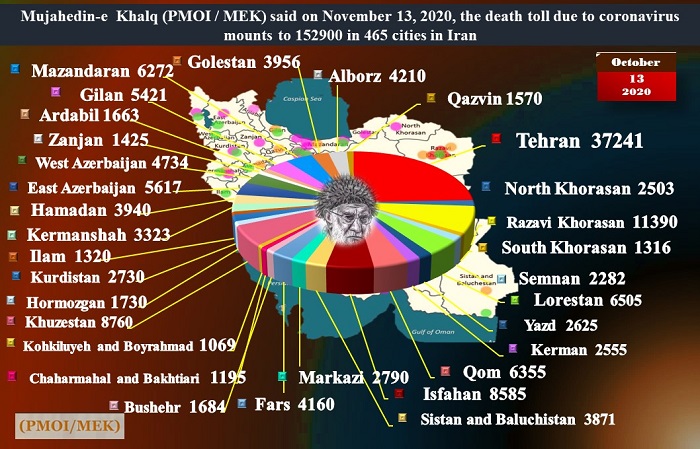 It’s not just the coronavirus that the (PMOI / MEK Iran) is revealing more information about to ruin the regime’s propaganda campaign.

More than 152,900 people have now died from Covid-19 in Iran. The figures are from data obtained by the Iranian opposition, the National Council of Resistance of Iran’s (NCRI), and the People’s Mojahedin Organization of Iran (PMOI / MEK Iran). These numbers, as usual, are far higher than the figures given by the Iranian regime, which appear to show that ‘only’ 40,582 people have died across Iran.

More than 152,900 people have died of the novel #coronavirus in 465 cities checkered across all of Iran's 31 provinces, according to the Iranian opposition PMOI/MEK.

The Iranian regime’s president, Hassan Rouhani, continues to downplay the seriousness of the disease and has avoided any decision about whether to lock down the country again to contain the virus which is overwhelming the nation’s health system. All Rouhani can do is to speak weasel words when he says: “Maintaining people’s health has always been the state’s main priority. The National Covid-19 Task Force will soon evaluate and adopt a comprehensive plan to manage the new phase of this illness.”

In the meantime, the head of Iran’s Nursing Apparatus Organization has spelled out the dire state of Iran’s nursing staff in a letter to Rouhani. “In some hospitals, each nurse has to look over ten Covid-19 patients. And these are nurses who are highly fatigued, both physically and psychologically, due to nine months of non-stop care for coronavirus patients,” they say, “currently more than 40,000 nurses have contracted Covid-19… it is necessary to immediately hire at least 30,000 new nurses and accelerate the process to pay the nurses’ paychecks and benefits,”

Nurses in #Iran are enduring harsh conditions as the #COVID19 virus kills more than a thousand a people a day.https://t.co/diPPJfhWGt

The head of the Tehran Covid-19 Task Force, Alireza Zali, reinforced the seriousness of the disease across Tehran’s hospitals when he was reported saying: “The number of hospitalized patients in Tehran province stands at 6721, of which 1832 are in ICUs. The number of people being released continues to remain lesser than new patients being hospitalized. Right now, our beds are full, and we cannot provide any more medical care. When a patient comes, we say go home and come back if you get more ill. When they do return, the golden opportunities will be long gone.”

Mohammad Reza Hashemian, an ICU expert in Tehran’s Masih Daneshvari Hospital, was even more sanguine about the situation in Iran’s hospitals and the number of medical staff who are either incapacitated or who are actually in ICU with Covid-19. “There is no one taking any responsibility. Everyone has become a reporter. There is no one taking responsibility for the 450 patients who died today,” said Hashemian. “No one says the country’s Covid-19 numbers are wrong or I am to blame. No one apologizes or says our problem is in this or that stage. We all understand this. There are people who initially made remarks against quarantine measures. Yet as time passed by and science proved that they were wrong, they did not even say we were wrong… I entered the Covid-19 Scientific Committee and since I took a strong position against anti-viral medication, they asked me to resign from the committee… If you express anything in opposition, it is as if the issue has become political.”

The People’s Mojahedin Organization of Iran (PMOI / #MEK) announced this afternoon, Friday, November 13, 2020, that #Coronavirus has taken the lives of more than 151,800 people in 465 cities across #Iran. #COVID19 https://t.co/DWB7EB4gFI pic.twitter.com/F0vus2Crr4

The ICU department in Mashhad’s Imam Reza hospital’s head was unequivocal when he called on the government to impose a 2-week lockdown. He pointed to the “R” number, which must be driven under 1 for the virus to be suppressed. It is currently sitting at between 8 and 10, after creeping up from a figure of 3 at the beginning of the outbreak. “This is a disaster,” said the ICU head.

Similar messages are coming from all Iranian regions. “The complete shutdown of red and black zones in the Razavi Khorasan province is necessary because economic issues are not more important than people’s lives,” said the head of Mashhad’s Nurses Organization where 40% of the city’s nurses have already been infected.

In Kerman province, the Covid-19 Task Force stated that there were 23 people who had lost their lives in the previous 24 hours and there were 728 patients in hospital with the disease.

It’s not just the coronavirus that the (PMOI / MEK Iran) is revealing more information about to ruin the regime’s propaganda campaign.