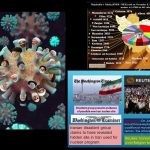 Written by Mohsen Aboutalebi on November 9, 2020. Posted in NEWS 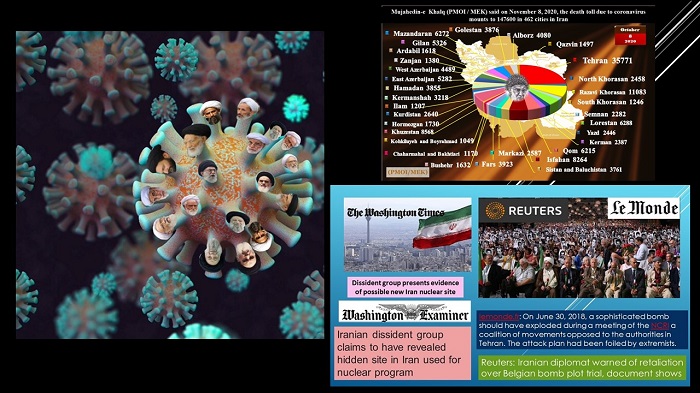 (PMOI / MEK Iran): When the society is dispersed with a virus, the economic crisis is increasing day after the other, when the death toll and hospitalization are reaching the ceiling, then terrorism is ready to attack our society harder than before with the support of countries such as Iran it goes wilder and more emboldened.

Almost a year ago the world faced an unwanted guest that no one imagined it can drastically change our lives and destroy almost all our plans and resolutions for 2020. Since then, almost 50 million are infected by a coronavirus, and the death toll has surpassed 1,2 million. Over 147,600 people have died of the COVID-19 in Iran’s 31 provinces, according to reports by the Iranian opposition, the National Council of Resistance of Iran (NCRI), and the People’s Mojahedin Organization of Iran (PMOI / MEK Iran).

The (PMOI / MEK Iran), the Iranian opposition to the mullahs’ regime, has been monitoring the situation since the beginning of the outbreak because the corrupt mullahs’ regime cannot be trusted to be honest in such situations. The regime claims that the numbers of people have died – stands at 38,291, around a fourth of the actual figure, stated by the (PMOI / MEK Iran).

Europe became the epicenter with more than 10 million cases and the second round of lockdown with tougher measures are imposed on different countries such as France, Belgium, Germany, Netherlands, etc. Meanwhile, Belgium recorded 20,000 new positive cases per day which was the highest number per capita amongst EU countries.

The People’s Mojahedin Organization of Iran (PMOI / #MEK) announced this afternoon, Sunday, November 8, 2020, that #Coronavirus has taken the lives of more than 147,600 people in 462 cities across #Iran. #COVID19 https://t.co/nkc86UUeG4 pic.twitter.com/A7C0gTMv2K

The situation in the rest of the world was not better, the USA has recorded almost 10 million positive cases which caused more than 230,000 deaths. India, Brazil, Russia are facing difficult situations. According to Belga, Iran is the hardest-hit country in the middle east. Iran recorded the highest death toll amongst all other countries with more than 400 death in 24 hours. This data is not still reliable as Iran makes 25,000 tests per day while experts approximated that Iran should take at least 200,000 tests per day to be able to cover the needs, Belga added. Independent resources from the National Council of Resistance of Iran (NCRI) estimated a death toll of more than 147,600.

Whenever human beings faced with natural disasters, war, disease, deprivation, etc. solidarity was the solution. We as human beings, historically make stronger social bonds to overcome difficult situations. We share the shelter, food, and water until we get rid of problems without expectations. While coronavirus impacts the sense of solidarity and social-behavior mentality more than it destroys the respiration system. Consequently, the cultural aspect of human life is challenged, and it needs to be clarified again. We cannot use our museums, concert halls, sports stadiums, celebrations, even parliaments which are the foundation of our democracy are in danger.

More than 147,600 people have died of the novel #coronavirus in 462 cities checkered across all of Iran's 31 provinces, according to the Iranian opposition PMOI/MEK.

Terrorism continues even in pandemic

Economic crises, an increasing number of hospitalized patients, and mental (psychological) health of the society can be counted as three major effects of coronavirus on each country. However, terrorism remains an alarm for human being civilization. Terrorism wants to prove it remains destructive for human beings as well as coronavirus.

Samuel Paty, a French teacher, was beheaded close to his school near Paris on October 16, for showing cartoons of the Prophet Muhammad in class. Two weeks later, three others have been killed in a knife attack at a church in Nice, France. Hate speech from leaders in Islamic states especially from Iran continues. In addition, an arrested Iranian diplomat terrorist, Asadullah Asadi, in Belgium has also threatened Belgian police for retaliation that armed groups are ready if the court is going to convict him. In October, Belgium increased the terror threat level from 2 to 3 (out of 4) for specific targets in Belgium. Beginning of November, 3 gunned men attacked the university of Kabul, Afghanistan left more than 40 casualties.

During a press conference in Brussels on October 7, 2020 lawyers of the civil parties (the National Council of Resistance of Iran (NCRI) and 18 other EU and US personalities) called the case of the Iranian diplomat terrorist the most important case of the 21st century. They confirmed the case provides sufficient evidence for state terrorism which gives the opportunity to bring the whole Iranian regime to the trail, including the supreme leader, president, ministry of intelligence, and ministry of foreign affairs.

Evacuated streets because of coronavirus do not mean terror attacks are improbable. However, it leads to targeted attacks. Instead of blowing up an airport or a filled metro station that every innocent person could be harmed, terrorist attacks are showing their inhuman face directed to specific targets, a teacher, a church, and a university. Beheading, which was seen repeatedly in ISIS videos, now it comes to the streets of Paris.

On the other hand, the leaders of other nations warn for even more violence. For instance, Iranian President Hassan Rouhani on October 28, warned that insulting Muhammad could spark “violence”. The Iranian president also called on the West to “stop interfering in the internal affairs of Muslims” if it “really wants to achieve peace, equality, calm and security in our societies.” Belga reports. Putting this comment next to the comments made by the Iranian diplomat terrorist depicts terrorism remains a threat for modern societies especially during crises such as a pandemic.

When the society is dispersed with a virus, the economic crisis is increasing day after the other, when the death toll and hospitalization are reaching the ceiling, then terrorism is ready to attack our society harder than before with the support of countries such as Iran it goes wilder and more emboldened. The solution to coronavirus is not apart from terrorism. Keep the spirit of solidarity inside the society and stand firm against terrorist organizations and states.

The #coronavirus is the mullahs’ strongest ally; imprisonment and executions are their most essential instruments of power; and the Islamic Revolutionary Guard Corps (IRGC) is the most reliable killing machine to prop up their rule. #Iran pic.twitter.com/ueKbLQ2W20

Mrs. Maryam Rajavi the President-elect of the National Council of Resistance of Iran’s (NCRI): The coronavirus is the mullahs’ strongest ally; imprisonment and executions are their most essential instruments of power, and the Islamic Revolutionary Guard Corps (IRGC) is the most reliable killing machine to prop up their rule.
MEK Iran (follow them on Twitter and Facebook)