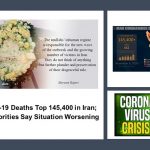 Written by Jennifer Jones-Kelley on November 7, 2020. Posted in NEWS 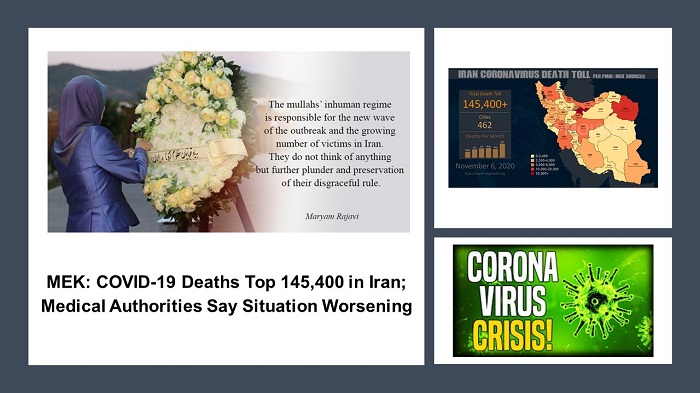 The COVID-19 has taken the lives of over 145,400 people throughout Iran, according to the Iranian opposition NCRI and (PMOI / MEK Iran).

More than 145,400 people in 462 cities in all 31 cities in Iran have died from COVID-19, according to a statement released Friday by the National Council of Resistance of Iran’s (NCRI) and the People’s Mojahedin Organization of Iran (PMOI / MEK Iran). This number stands in contrast to the regime’s official death toll of 37,409, which represents only about a quarter of the total coronavirus fatalities.

More than 145,400 people have died of the novel #coronavirus in 462 cities checkered across all of Iran's 31 provinces, according to the Iranian opposition PMOI/MEK.

Alireza Pak-fetrat, a member of the regime’s Majlis (parliament) representing Fars Province, called out regime health authorities on Thursday for their failure to release accurate coronavirus numbers. “Why do not provide the actual Covid-19 stats to the people. When the number of new cases and deaths resulting from Covid-19 in Fars surpassed the country’s average or our province being in red status, we should not be indifferent. In fact, we should tell people the truth and find an immediate solution to the Covid-19 illness,” he said in comments broadcast by the semi-official ISNA.

The most recent surge in coronavirus infections has left healthcare workers exhausted and hospitals understaffed and ill-equipped to handle increasing numbers of patients. On Thursday, Seyyed Mohammad Pakmehr, Deputy Chair of the Majlis Health Committee commented on the situation facing Iran’s healthcare system. “The country is in a crisis mode due to coronavirus. The number of deaths is extremely high. The healthcare apparatus has endured enormous pressure. Regrettably, 400 people are losing their lives every day and this figure may go up rapidly,” he said.

#Iran: The People’s Mojahedin Organization of Iran (PMOI / #MEK) announced this afternoon, Friday, November 6, 2020, that #Coronavirus has taken the lives of more than 145,400 people in 462 cities across Iran. #COVIDー19 https://t.co/6xQpqmdODh

“If it continues like this, the final death toll may reach 200,000. Around 32,000 of the country’s 110,000 nurses have contracted COVID-19 and only 4,000 nurses have been hired since the spread began across the country. So, in sum, nurses are under grueling pressure,” he added, according to the Ministry of Intelligence and Security (MOIS)-affiliated Mehr news agency.

A deputy of Tehran’s COVID-19 Task Force added his concerns about the effect of an increasing number of coronavirus patients on hospital capacity. “During the past three weeks, we have witnessed extremely dire conditions. The number of people being hospitalized has reached 800 per day and this has decreased our hospital capacity,” he said on Thursday, according to Mehr.

Over 145,400 people have died of the novel #coronavirus in 462 cities checkered across all of #Iran’s 31 provinces, according to reports tallied by the Iranian opposition PMOI/MEK as of Friday afternoon local time, November 6.https://t.co/mh0bX4XMPz

The chief of Imam Reza Hospital in Tabriz worries about oxygen supplies on Wednesday in remarks carried on state television. “One of the main challenges we are facing is a shortage in oxygen in this province and procuring oxygen supplies from neighboring and other provinces,” he said.

Another deputy of the Tehran Covid-19 Task Force shared these concerns. “We are facing a five-fold increase in the amount of oxygen consumed due to coronavirus. We are seeing an increasing number of people entering hospitals in dire conditions. Currently, the number of Covid-19 patients is remarkably high, and they are generally in worse conditions in comparison to March. The patients are currently coming to seek treatment in far worse conditions and the number of patients being released has decreased. In the coming months, we will be witnessing an increase in this trend. Due to the extreme circumstances we have twice requested a shutdown in Tehran so senior officials would agree with stronger limitations in order to have medical professionals re-energize and for us to surpass this tsunami,” the official added, according to the Islamic Revolutionary Guards Corps (IRGC)-affiliated Fars news agency.

Deputy Dean or Neyshabur Medical Sciences University echoed these concerns on Thursday in remarks carried by ISNA. “In the third wave, the population in the city of Neyshabur has contracted Covid-19 far more than the rural areas. Currently, the 22 Bahman Hospital is full, and 100 percent of the beds are allocated to coronavirus patients… if restrictions are not imposed, we should expect a humanitarian catastrophe,” he said.