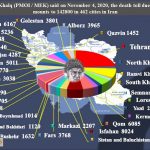 MEK Iran: All Beds Allotted to COVID19 are Occupied 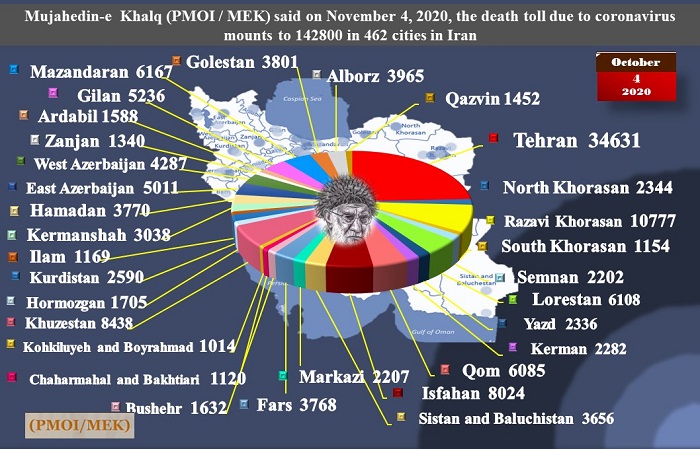 Over 142,800 people have died of the novel coronavirus in 462 cities checkered across all of Iran’s 31 provinces, according to reports tallied by the Iranian opposition People’s Mojahedin Organization (PMOI  /MEK Iran).

In Iran, over 142,800 people have now died from coronavirus, the National Council of Resistance of Iran’s (NCRI), and the People’s Mojahedin Organization of Iran (PMOI / MEK Iran) reported on Wednesday.

The coronavirus death toll in various provinces include:

More than 142,800 people have died of the novel #coronavirus in 462 cities checkered across all of Iran's 31 provinces, according to the Iranian opposition PMOI/MEK.

Of course, this is in addition to the death tolls in other provinces that were not updated overnight and should be considered a minimum because of the regime’s attempts to suppress death toll reporting by pressuring medical staff and relatives.

The regime has only reported 36,579 deaths and refuses to accept that there is even a problem. Supreme Leader Ali Khamenei made a 45-minute speech this week where he didn’t even mention the issue or express sympathy for those who are sick or have lost loved ones.

However, the deputy chair of the Tehran Covid-19 Task Force admitted Tuesday that the ICUs are full, so they’ve had to create ‘mobile ICUs’ by equipping ordinary beds with ICU equipment. They also noted that infection rates are “not precise”, with a number of cases remaining unidentified, so it’s impossible to estimate the true death count.

While Alireza Zali, head of the Task Force, said: “Currently we have 6337 coronavirus patients hospitalized in ordinary sections and ICUs of 108 hospitals across Tehran province. This is an unprecedented record in the number of Covid-19 patients hospitalized since the beginning of this pandemic… Considering the high number of dire patients in ICUs it is forecasted that the Covid-19 death rate will remain high in the coming three weeks.”

Tehran City Council chief Mohsen Hashemi called to “shutdown Tehran entirely”, along with other major cities, for two weeks in order to slow the “storm-like spread of Covid-19”.

This is something that would likely receive support from other officials who are battling with high infection, hospitalization, and death rates, with multiple deans of medical sciences universities reporting that they have thousands of Covid-19 admissions, hundreds of which are in the ICU, and that deaths are rising because there aren’t enough beds or staff to support them.

Many provinces are reporting that they are in red or even black conditions, where deaths are expected to skyrocket.