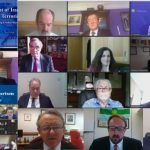 Written by Mohsen Aboutalebi on November 3, 2020. Posted in NEWS

British Members of Parliament and Irish politicians joined the online conference, as well as Iranian supporters of the (PMOI / MEK Iran) and the (NCRI) from various countries.

An online event held on 15th October, hosted by the National Council of Resistance of Iran’s (NCRI), had Mark Williams, a British MP, as an invited speaker. His focus was on the Iranian regime’s terrorism and how it undermines global security. Other British Members of Parliament and Irish politicians also joined the online conference, as well as Iranian supporters of the People’s Mojahedin of Iran (PMOI / MEK Iran) and the National Council of Resistance of Iran (NCRI) from various countries. Their focus was on Iran’s regime being a real threat to global security as the mullahs have supported terrorist acts in Europe.

In #Britain, under @FCDOHumanRights Foreign & Commonwealth Office of Global #HumanRights Sanctions Regulation, we have power to prescribe IRGC. That must become a reality #DisbandIRGC We must publicly name, shame, and report on terrorists and terrorism https://t.co/GKovGMjl0N

This online event was timed after the arrest of the diplomat-terrorist, Assadollah Assadi, whose foiled bomb plot against the NCRI’s “Free Iran” gathering in 2018 in Paris landed him in prison. Assadi is now awaiting trial but has threatened Belgian authorities with the high chance of attacks by the mullahs’ proxy groups if he is found guilty.

Mark Williams spoke about the international terrorism perpetrated by the regime in Tehran. He introduced his speech by saying he felt privileged to have been invited to attend the NCRI (PMOI / MEK Iran), annual gatherings and to visit their base in Albania as he did last year.

Every year for 15 years he mentioned how democracy, the freedom to travel, and the freedom of speech were celebrated at the NCRI and (PMOI / MEK Iran), events. He said that once again he was speaking in support of Maryam Rajavi for a democratic, free, and secular Iran. He said he knew that the NCRI and (PMOI / MEK Iran), had supporters from around the world and many thousands risking their lives as supporters within Iran.

He said he condemned the theocratic dictatorship for its exporting of terrorism throughout the world such as in Iraq, Syria, Hezbollah in Lebanon just to name a few. He mentioned that the regime was built on trademarks which are:

He went on to mention the gathering that took place in June 2018 which nearly ended in catastrophe caused by 2 terrorist plots against the Iranian resistance the NCRI (PMOI / MEK Iran), which were fortunately foiled. The regime ambassadors from Tirana were told to leave the country. Now the regime’s ex-diplomat, Assadollah Assadi, is being tried in Belgium next month for being the mastermind behind the bomb plot aimed at a group of campaigners who supported democratic reforms in Iran.

Unfortunately, Assadi won’t let sleeping dogs lie and has issued a warning to the Belgian police warning them of possible retaliation if he is found guilty. This, said Mark Williams, is “truly reprehensible and disgraceful behavior.” He said that the Iranian regime needs to face the full force of the international community.

He said in Britain, under the Foreign and Commonwealth Office of Global Human Rights Sanctions Regulations, there is the power to “publicly name, shame, and report on terrorists and terrorism.” He said the activities of the regime should no longer be appeased, as terrorism is involved. Embassies in Europe should be closed down and the diplomats expelled if they are caught violating the Vienna Convention.

In the meantime, he said the West’s governments should engage in a dialogue with Maryam Rajavi and the NCRI. They should be told that the NCRI (PMOI / MEK Iran), wants to form a “democratic, free, and secular Iran.” Before that day arrives the international community should be condemning international terrorism that the Iranian regime has been a part of.

He ended his contribution with these words: “You have many friends, and we will continue voicing our concerns with you and alongside you. Thank you very much.”