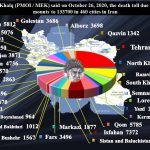 MEK: Coronavirus Death Toll in Iran Reaches 133,700 as the Regime Continues its Denial

Written by Amineh Qaraee on October 27, 2020. Posted in NEWS 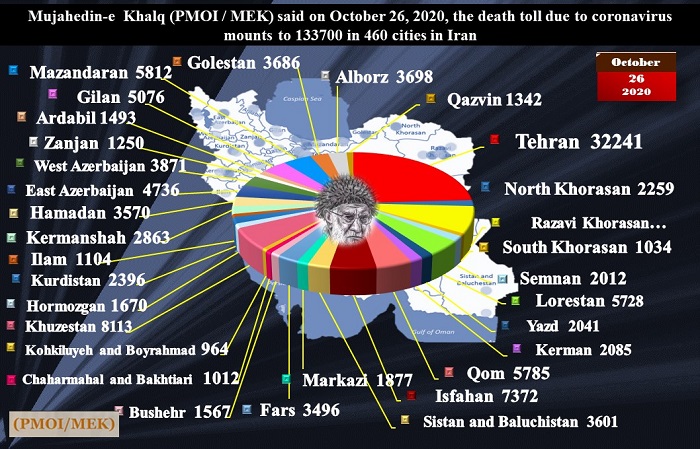 The coronavirus has taken the lives of over 133,700 people throughout Iran, according to the Iranian opposition (PMOI / MEK Iran).

As of 26 October 2020, over 133,700 people have died from coronavirus across Iran. The virus has spread to 460 cities over Iran’s 31 provinces, including 32,241 deaths in Tehran, and 8113 in Khuzestan. The number of deaths is continuing to increase as the regime does nothing to ensure the safety of the Iranian people.

Over 133,700 people have died of the novel #coronavirus in 458 cities checkered across all of #Iran’s 31 provinces, according to reports tallied by the Iranian opposition PMOI/MEK as of Monday afternoon local time, October 26.https://t.co/XD2OpuQZjk

The regime has attempted to conceal the severity of the Covid-19 pandemic in Iran since the virus first reached the country. They have downplayed the true number of deaths from coronavirus, and are currently declaring the death toll to be 32,953. The regime’s supposed statistics are around a fourth of the actual figure, obtained by the People’s Mujahedin of Iran (PMOI / MEK Iran) inside sources from across Iran.

According to the Mehr news agency, an outlet linked to the regime’s Ministry of Intelligence and Security, Hossein Ghashlaghi, member of the Supreme Medical Apparatus Council, stated on Sunday: “The current circumstances were forecasted long ago by experts and the necessary warnings were issued. The actual death toll cannot be denied, and the Health Ministry is merely registering the deaths of those patients who tested positive.”

“Based on field reports from medical professionals and according to the stats of those buried, one can assume that the Covid-19 death toll across the country is around three or four times the official numbers. Refusing to provide transparent reports about the status quo of this illness in the country and merely announcing red or yellow conditions in various cities is a dangerous mistake and cannot be compensated. This is one of the reasons why the death toll has been increasing,” He added.

The MEK and National Council of Resistance of Iran (NCRI) have persistently warned of the regime’s deception and called for the World Health Organization to send experts to investigate Iran, following the first official public statement by Iranian officials about Covid-19. The regime has shown a complete disregard for public safety, encouraging public gatherings, such as the celebration of the anniversary of the regime seizing power over Iran, and the bogus parliamentary elections of February 2020. Few measures have been put in place to ensure public safety and social distancing protocols were introduced at a very slow rate.

According to Iran state television, Deputy Health Minister Reza Malakzadeh, said on Saturday: We have the winter and cold weather ahead of us. There are serious concerns that our death toll will increase in the coming days and months. More than 50 million of the country’s population are still prone to contracting coronavirus.”

The mullahs’ dangerous approach to coronavirus follows a history of deception and disregard for the lives of the Iranian people. The regime is fearful of the consequences of further uprisings by supporters of the resistance movement, which have been taking place in Iran since December 2017 and are threatening the power of the regime.

The mullahs’ have used the Covid-19 pandemic as a tool of distraction and control in order to keep the people from having the strength to protest their theocratic rule. They wish to deny the devastating effect that Covid-19 has had on Iran and to appear to the international community as though it is handling the crisis competently, no matter the deathly consequences to the Iranian people.