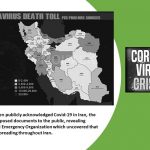 Written by Mohsen Aboutalebi on October 25, 2020. Posted in NEWS 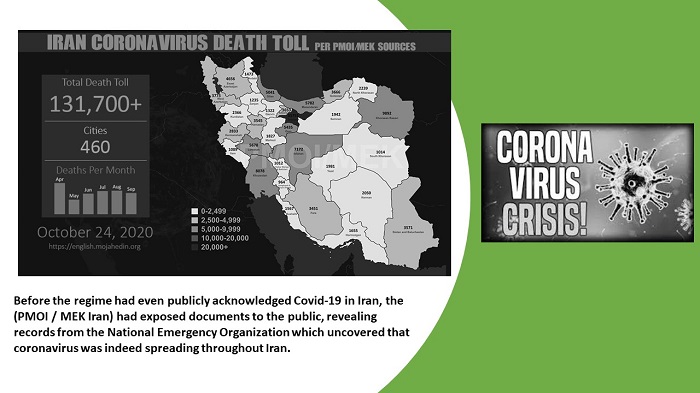 The novel coronavirus, also known as COVID-19, has taken the lives of over 131,700 people throughout Iran, according to the Iranian opposition NCRI and (PMOI / MEK Iran)

The Iranian regime announced Monday the highest daily coronavirus death toll since the pandemic began and even state media have begun to acknowledge that the crisis has been made far worse by the regime’s mismanagement and lack of action.

Worse still, this was likely only a fraction of the true number because the regime has only revealed about a quarter of the death toll, according to the National Council of Resistance of Iran’s (NCRI), and the People’s Mojahedin Organization of Iran (PMOI / MEK Iran),  who said Tuesday that over 131,700 Iranians have now died from coronavirus.

#Iran: The People’s Mojahedin Organization of Iran (PMOI/#MEK) announced this afternoon, Saturday, October 24, 2020, that the number of #Coronavirus fatalities in 460 cities had exceeded 131,700. #COVID19 https://t.co/4STo57wyoq pic.twitter.com/Ew7XBFk7ad

The regime’s plan when the coronavirus outbreak began was to cover up the scale of the virus so their inaction would not seem as callous, but as deaths rise, so too did the suspicions of the state-run media.

Vatan-e Emrooz wrote: “Members of the health system and the medical community, in addition to inviting people to comply with health protocols, time and again announced that the best way of breaking the coronavirus transmission chain is closing critical cities and imposing a strict restriction.”

But of course, the regime not only refused to institute a lockdown, but they also forced people back to non-essential work, reopened schools, and even held gatherings that actively spread coronavirus. All because they didn’t want to pay for food for workers staying home or laptops for children learning at home or even reduce the amount of money being gained by religious sites. To be clear, the regime could not only afford this, but they would still have billions left over.

More than 131,700 people have died of the novel #coronavirus in 460 cities checkered across all of Iran's 31 provinces, according to the Iranian opposition PMOI/MEK.

The daily paper continued, by condemning the government for saying that there was nothing else to do but open the economy, accusing the mullahs of returning to business as normal during a pandemic when that move has not helped the economy or healthcare sectors.

Ebtekar daily wrote: “The coronavirus outbreak, like many other issues in Iran, has been linked to several issues; a link that raises concerns beyond the original problem. Among the issues of concern are the indifference and lack of attention to the country’s decision-making institutions to human and global experiences.”

Simply, the regime didn’t care if people died, so long as it helped them keep their shaky grasp on power, because how could people flood the streets when they are supposed to be social distancing. Worse still, the paper said that the regime blames the people for the increase in cases and deaths as if they were the ones who decided it was safe to go back to work.

The Iranian Resistance NCRI and (PMOI / MEK Iran), has consistently warned of the regime’s deception over the real Covid-19 status of Iran. Following the mullah’s official’s first public statement on coronavirus, President-elect of the National Council of Resistance of Iran (NCRI), Maryam Rajavi, called for the World Health Organization to send experts to Iran who could formally assess and respond to the seriousness of the epidemic.

Official statements from the Health Ministry mullahs regime state that the coronavirus death toll is 31751, one-fifth of the (PMOI / MEK Iran) reports. Before the regime had even publicly acknowledged Covid-19 in Iran, the (PMOI / MEK Iran) had exposed documents to the public, revealing records from the National Emergency Organization which uncovered that coronavirus was indeed spreading throughout Iran.