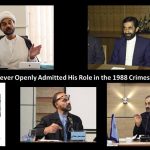 MEK Iran: Mahallati Has Never Openly Admitted His Role in the 1988 Crimes Against Humanity

Written by Amineh Qaraee on October 24, 2020. Posted in NEWS 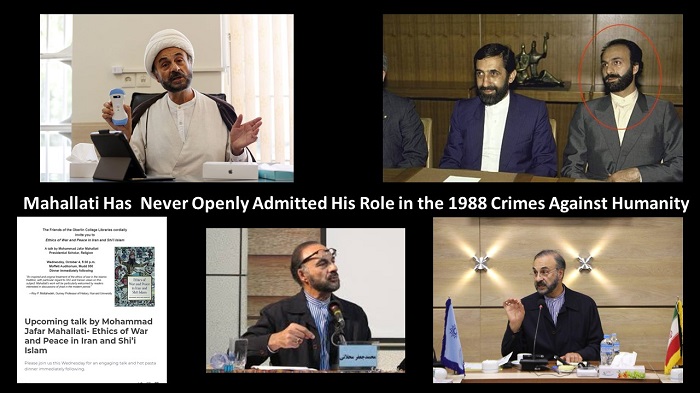 MEK Iran: Role in the 1988 Crimes Against Humanity –  Mahallati at that time he was employed as the Ambassador and Permanent Representative of Iran to the United Nations. Even though he knew these “summary executions” had taken place and even referred to them as “horrible acts” he denies playing any part in it.

This statement was brought against Professor of Religion and Nancy Schrom Dye Chair in the Middle East and North African Studies, Mohammad Jafar Mahallati, in relation to the role he played in the 1988 slaughter of thousands of political prisoners. At that time he was employed as the Ambassador and Permanent Representative of Iran to the United Nations. Even though he knew these “summary executions” had taken place and even referred to them as “horrible acts” he denies playing any part in it.

Here's a petition directed at @oberlincollege to investigate why Mohammad Jafar Mahallati, formerly Iran's UN Ambassador and responsible for coverup of the 1988 crimes against humanity, was hired as the 'professor of peace'.

The fact of the matter is that in the role he played at the time he would have known about the Iranian regime’s Islamic criminal laws and he also should have known about the regulations of the Islamic Revolutionary Court which had decided to impose the death penalty on anyone suspected of supporting the opposition which took place mostly without proper trials. In the international context, no country would dream of imposing the death penalty on someone simply for supporting the opposition.

Because the regime feared reprisals the executions quietly took place within the prison confines so attention wasn’t drawn tom them. It is possible that Mahallati might not have been told of the executions.

What is certain about Mahallati is that he did the following: he obstructed the U.N.’s investigation of the executions once they were over. This is the only global organization that cares about promoting human rights and it is the one that families of those executed could turn to if they wanted any information about the demise of their loved ones. Mashallati tried to stop this which proves he has something to cover up. Also as reports came in announcing the executions Mahallati showed no emotion and denied any involvement.

Eventually, Mr. Mahallati admitted that the executions did take place of what he said were persons who were despicable and should not carry on living or be entitled to a trial.

However, there are some allegations he should be expected to answer, which are that:

Later Mr. Mahallati’s argument appeared to be that the executions did take place after all, but they were executions of those who were despicable and not worthy of living and therefore, presumably, not worthy of due process of law either. His Note explicitly applies the following terms to the thousands of men and women who were executed after trials that were summary in the extreme: spies, terrorists, mercenaries, assassins, criminals, and “internal traitors during time of war”.

Reference from the article: Mahallati’s Past as an Apologist for Crimes Against Humanity

1988 onwards by U.N. mechanisms. For example, as reported in a Feb. 1989 U.N. document, on Nov. 9, 1988, U.N. Special Rapporteur on Summary or Arbitrary Executions S. Amos Wako submitted the following information to the Commission on Human Rights:

“Since July 1988, a large number of prisoners had been executed in various parts of the country, without trial or with a trial of a summary nature.”

1988. Yet we have Mr. Mahallati’s assurance that the entire time that he was conversing with U.N. officials on this matter — from the end of Nov. 1988 to the end of March 1989 — he knew nothing of the executions and received “not a single communication” from Tehran on the matter. Does this mean that his tale suggesting that the victims were battlefield casualties was his personal invention and that the (PMOI / MEK Iran) agitprop videotape he procured to mislead Mr. Pohl was presented of his personal initiative?

AI’s briefing presented direct testimonial evidence from families of both groups of executed prisoners, the (PMOI / MEK Iran) and the “secular leftist,” gave more than 300 names of victims concluding that “the real total could amount to thousands,” and recorded the following excerpt from an early December Radio statement made by the then President, Seyyed Ali Khamenei:

“Do you think we should greet with sweets those who have links from inside prison with the hypocrites [term used for members of (PMOI / MEK Iran)] who mounted an armed attack inside the territory of the Islamic Republic? … What should we do to them if that contact is established? They are condemned to death and we will execute them.”

Mr. Mahallati’s Note verbale begins by suggesting that both groups of the executed prisoners mentioned in AI’s Dec. 13, 1988, are indefensible, i.e. (PMOI / MEK Iran) prisoners who were executed as mohareb (one who is at war with God) as well as secular leftist prisoners who were executed as mortad (an apostate). Consistent with Tehran’s policy of circumventing any questions about the executed secular leftist prisoners, the untrue and insulting elaborations that the Note offers on the executions pertains only to PMOI prisoners whom Mr. Mahallati’s President had already falsely accused of having had “links from inside prison with the hypocrites.”

Kaveh Shahrooz and Lawdan Bazargan, the two people who took the initiative in the letter you received, both lost loved ones in the 1988 mass summary executions. Kaveh Shahrooz’s 28-year-old uncle, Mehrdad Ashtari, was executed as a mohareb after serving eight years of a 10-year sentence for speaking in support of the (PMOI / MEK Iran). Lawdan Bazargan’s 29 year-old-brother, Bijan Bazargan, was executed as a mortad after serving six years of a 10-year sentence for saying that he was a Marxist and rejected Islam.