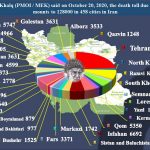 Written by Jennifer Jones-Kelley on October 21, 2020. Posted in NEWS 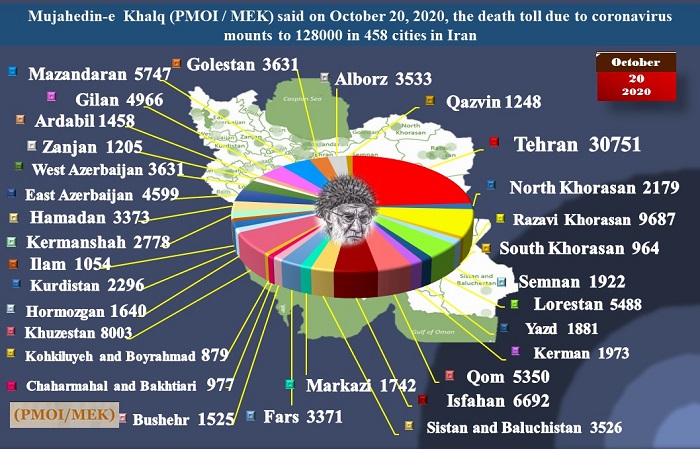 The regime has confirmed 31,034 of these deaths, or approximately one-fourth of the actual total. However, the (NCRI), and the MEK have recorded far more active case rates and fatality figures than the regime is ever prepared to admit.

More than 128,000 people in 458 cities in all 31 provinces in Iran have died of Covid-19, according to a report released by the People’s Mojahedin Organization of Iran (PMOI / MEK Iran) on Tuesday.

Regime health officials have recently become very vocal in their calls for a nationwide lockdown and have publicly called for additional medical resources to fight the coronavirus. At a meeting with Health Minister Saeed Namaki and his directors on Monday, regime President Hassan Rouhani excoriated the group for undermining his efforts to underplay the severity of the virus. “Our experts and medical professionals do not speak as one and they have different tones at times,” he said.

“While warning the people and informing them about the consequences, they also spread fear among our society… No one should voice remarks for people to feel that the government is not using all it can to confront this issue,” he continued.

Rouhani added that the repressive regime was not capable of enforcing a lockdown, which would seem to be an indictment of his own government, considering how successfully Western European countries managed lockdowns in the spring. “How are we to guarantee people stay in their homes when we impose lockdowns… We may think some things are good, but they are not practical,” he said.

Calls for a Lockdown

Despite Rouhani’s most recent tantrum, regime health experts have not stopped their calls for a lockdown. On Tuesday, National Coronavirus Combat Taskforce (NCCT) member Minoo Mohraz stated the case for lockdown measures. “The status quo is horrible. It is already too late for lockdown measures. Everywhere across the country is in atrocious conditions,” she said.

By reopening schools and public places, the regime ruling #Iran has triggered a national disaster and the most innocent victims are children and young students.#COVID19 https://t.co/YHAJgCcukK

“Tehran is even worse. Based on medical science there need to be lockdown measures imposed. Refusing to impose lockdown measures are based on political decision making, not medical science. One individual being hospitalized in ICU for one million costs millions (in Iranian rials). Right now, we have 4700 people in ICUs. This is next to all the supplies they purchase to prevent them from getting the virus… Medical costs are backbreaking. The government needs to understand that they should pay for all these. They need to start thinking will they shoulder these expenses or providing for the people under lockdown conditions. During the 45 years of my medical experience, I have never seen so many patients in ICUs and so many fatalities. Watching all these deaths have psychologically fatigued our medical professionals,” she added, according to the state-run Khabar Four website.

Over 128,000 people have died of the novel coronavirus in 458 cities checkered across all of Iran’s 31 provinces,…

The head of Tehran’s Rasul Akram hospital worried on Tuesday that it is already too late to save many lives due to the delay in mandating a lockdown. “Even if the best protocols are implemented tomorrow and the entire country is shut down, we will still see a high rate of daily deaths for another 2-3 weeks,” he said, according to the state-run Tasnim News Agency.

Ali Ata, the spokesperson of Tehran City Council, expressed the frustration felt by many Iranians when he asked, “Why isn’t Tehran shut down? Why aren’t there any serious restrictions in red provinces? We can’t contain the spread of coronavirus with recommendations and advice,” according to Tasnim.

The regime has confirmed 31,034 of these deaths, or approximately one-fourth of the actual total. However, the National Council of Resistance of Iran (NCRI), and the MEK have recorded far more active case rates and fatality figures than the regime is ever prepared to admit.

President-elect of the National Council of Resistance of Iran (NCRI) Mrs. Maryam Rajavi sent her condolences to the families of those who have died due to the regime’s criminal negligence.

While the people of #Iran are suffering from shortage of special medications including for diabetes, the IRGC exports these medicines to countries in the region. In the meantime, Rouhani celebrates a bogus victory over the import &export of arms for further belligerence.

She also tweeted: “In their chants rejecting missiles and demanding medicine, the people of Iran express their hatred towards the clerical regime. The only way out of poverty, unemployment, death, and disease is regime change. This will certainly happen through popular uprisings and by the Liberation Army.”